‘Prevent, the government’s preventative strategy aimed at tackling extremism, is problematic, argues Paul Thomas. Whereas the government’s earlier ‘community cohesion’ policy was a non-stigmatising way to address issues of extremism, segregation and racial tension between and within communities, the Prevent strategy was immediately problematic as it only worked with Muslims. Meanwhile, there is no apparent focus from the government on genuine processes of education in schools and colleges that build individual and collective resilience against extremist ideologies.

The recent terrorist events in France have inevitably prompted reflection on the possibility of similar attacks in Britain and on our policy approach to preventing our young people being attracted towards extremist ideologies in the way that the three French attackers were. Britain has apparently been proactive in that, since 2007, counter-terrorism strategies have included a genuinely preventative element, the so-called ‘Prevent strategy’. This approach of community-based engagement seems to reflect learning from previous anti-terrorism campaigns. It reflects the reality that simply relying on state repression may further fuel support for terrorist causes.

But the Prevent strategy, particularly the way that it has approached young people and their educational institutions, means that it has been ineffective and even counter-productive in its efforts to prevent attractions towards extremism. Most noticeably, there has been an increasingly securitised engagement with Muslim young people but little or no anti-extremism education that actually builds resilience against extremism and support for democratic citizenship. This process of police-led surveillance is now being deepened in schools and colleges in the wake of the Trojan Horse scandal, making Prevent’s approach even more problematic.

In my book on Prevent, I argued that a separate Prevent strategy was not actually needed. The government’s earlier ‘community cohesion’ policy (2001 onwards) had strong support at ground-level. It was a non-stigmatising way to address issues of extremism, segregation and racial tension between and within communities. It meant that the first phase of the Prevent strategy (2007-2011) was immediately problematic as it only worked with Muslims. This undermined community cohesion work. It also created an inevitable resentment within Muslim communities, as Prevent refused to engage with far-right extremism.

Young people were a key focus of this phase, with large numbers of young Muslims supposedly engaged through youth and community work. But this engagement was simply normal youth work with Muslims only, rather than a genuine process of citizenship education. There were clear barriers to anything more. Anti-extremism education would need robust discussions with young people around contentious issues such as the Iraq war, racism and understandings of religious doctrines. Facilitating such work requires confident and skilled educational professionals, yet Prevent gave no focus to building such educational capacity and so failed to learn the lessons of previous attempts to implement anti-racist education with young white people. The UK Youth Parliament proposed such a programme of youth worker training but were turned down by government, which begs the question of whether the government was actually comfortable with such political education processes.

The fact that engagement with Muslim youths in the first phase of Prevent was increasingly led by counter-terrorism police prompted the Communities and Local Government Select Committee to launch an inquiry in to Prevent in 2009-10. It also apparently led to the revamp of Prevent by the Coalition in its Prevent Review in 2011. This second phase of Prevent saw a down-sizing of the scheme by funding work in less areas and removing the community-based element entirely.

All Prevent work on the ground now has to be funded and approved by the Home Office’s Office for Security and Counter-Terrorism – even work that is supposed to be about engagement with Muslim youths. This means that there is little local autonomy and it is much harder for Muslim community organisations to demonstrate leadership within Prevent. Although the Prevent Review broadened the strategy’s focus so that it now included far-right extremism, there is little or no evidence to date of resources being allocated to this. Prevent remains an essentially Muslim-focused policy.

What has also become increasingly clear is that phase 2 of Prevent is now focused on schools and colleges and the need for educationalists to spot and report young Muslims who are ‘at risk’ of being radicalised. Here, the highly-contested concept of radicalisation that has always underpinned Prevent comes in to sharper focus. In the wake of the Trojan Horse controversy, government has made the compliance of schools and colleges (including nursery schools) with the Prevent strategy part of the OFTSED inspection framework and is now moving to making Prevent implementation by all public bodies a legal duty.

The education-based approach to radicalisation appropriates child protection concepts of ‘vulnerability’ and ‘grooming’ and applies it to the language, behaviour and political attitudes demonstrated by young Muslims. If they are deemed to be ‘at risk’ they must be reported to the ‘Channel’ partnership, where individual de-radicalization counselling will take place. A recent report highlights how, to date, 153 children under 11, 690 young people aged 12-15 and 554 aged 16-17 years  have been referred to the Channel process. The overwhelming majority of these are Muslims. The Government has failed to publish the results of the two internal reviews of the effectiveness of this Channel process.

Meanwhile, there is no apparent focus from the government on genuine processes of education in schools and colleges that build individual and collective resilience against extremist ideologies. The potential vehicle for this is through Citizenship Education but this has been progressively side-lined in favour of ‘academic’ subjects, resulting in the squeezing of curriculum time and a lack of focus on training teachers in the skills of citizenship teaching. Academic evidence would suggest that educational processes that both educate young people about democratic structures and processes, and allow them to practice those skills through debate of current issues are the only effective way of building resilience amongst young people against extremism. Such processes would strengthen understandings of and support for the rights and responsibilities that underpin equal, democratic citizenship in an increasingly diverse society, as well as being on a universal and non-stigmatising basis that is congruent with the community cohesion policy approach.

Would such a process of rejuvenated youth citizenship education through both schools and community settings ensure that individual young people are not attracted towards extremism? No, because no preventative policy can guarantee that. What it would do is strengthen resilience within and between communities in the face of an undoubted terrorist threat. Such an approach to young people would be a positive one, in keeping with our democratic values and commitment to equality and multicultural diversity; the current Prevent approach is a negative one of stigmatising surveillance of one particular community and its future needs to be questioned.

Note: This article appeared originally on the PSA’s Insight blog and gives the views of the author, and not the position of the British Politics and Policy blog, nor of the London School of Economics. Please read our comments policy before posting.

Paul Thomas is Professor of Youth and Policy at the School of Education and Professional Development, University of Huddersfield. He has a long-term research interest in the implementation of multiculturalist polices such as Prevent and community cohesion. His book‘Responding to the threat of violent extremism – Failing to Prevent?’ was published by Bloomsbury in 2012 and a recent article in British Politics explores the Prevent/community cohesion relationship further. He tweets @Paul_Thomas11. 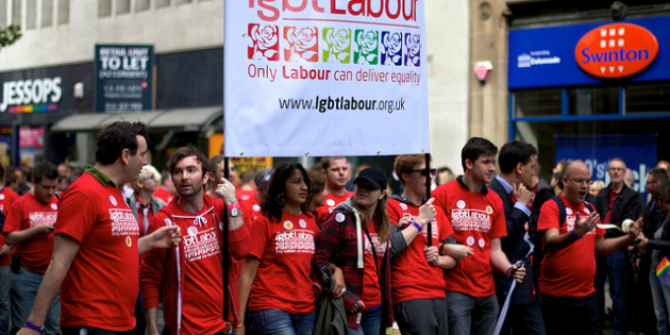