One of the most surprising findings of the 2011 census was the extent to which white British people have opted to leave London. Eric Kaufmann explores the possibility that we are seeing ‘white flight’ from London, though he cautions against jumping to conclusions in the absence of sufficient empirical evidence.

Of all the changes announced by the 2011 census, one of the most startling is the rapid change in the ethnic composition of London’s population. This has caught experts by surprise and reflects an underestimate of the extent to which white British people have opted to leave an increasingly diverse London.

Between 2001 and 2011, the proportion of white British in London’s population fell from 58 to 45 per cent. The share of ethnic minorities reached 40 per cent of the total, a 39 percent increase, while whites of non-British origin grew by a whopping 52 per cent. The share of minorities in London has increased by a percentage point a year since 1991.

This has caught many by surprise. ‘By 2031 39 per cent of London’s population is projected to be from a BAME [minority] group,’ a 2010 Greater London Authority planning report announced. Last year, a group of the UK’s leading academic geographers took the GLA to task for overstating the pace of change and projected that in 2031, London would still be 64.5 per cent white. The train has arrived 20-30 years early – in 2011, London is already 59.9 per cent white. Analysts implied that London would not become ‘majority minority’ in most of our lifetimes, but the latest census figures suggest otherwise. 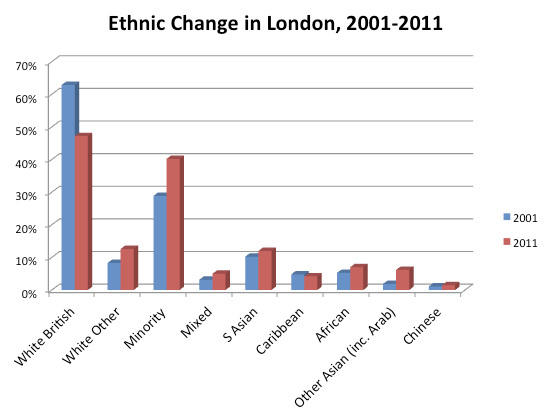 How did the demographers, many of whom I know and respect, get it so wrong? Don’t blame demography, which is the most predictive of the social sciences, because the ethnic composition of today’s 5 year-olds is mathematically linked to the population of 50 year-olds in 45 years’ time. Though political considerations may have affected the projections at the edges, this cannot be the explanation since projections for England were largely accurate. Minority fertility is not the issue: if anything minority birth rates have probably fallen faster than predicted.

Immigration underestimates may be a partial factor, but what is far more critical is that the experts misread white outmigration from London. One of those who got it right was geographer John Stillwell of Leeds University, who noticed there was large shift of whites from diverse wards in London to less diverse wards in the outer suburbs, and an even more dramatic white outlflow from relatively white wards of London to other parts of England and Wales. In Barking and Dagenham, to take an extreme example, a third of the white British population departed between 2001 and 2011. Since many lack the resources to move or are council tenants, this suggests that a majority of local white British who could leave may have done so. 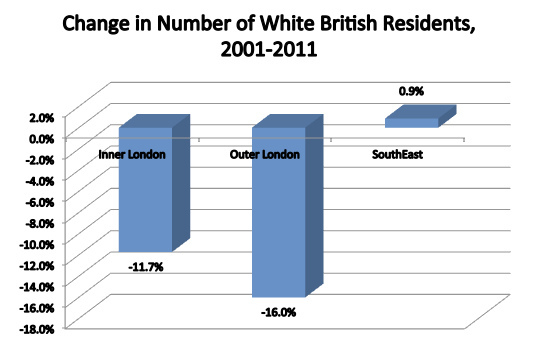 Yet we should not jump to any hasty conclusions. In our Demos project, Diversity and the White Working Class, funded by the Economic and Social Research Council, Gareth Harris and I put the concept of ‘white flight’ under a magnifying glass by asking why there has been a disproportionate shift of white British people out of diverse areas.

While white avoidance of ethnic minorities is the first thought that comes to mind, it’s important to consider the alternative explanations. Most diverse wards are urban and poor. Whites may be leaving for better schools, cheaper homes, fresher air, or because they are more likely to be retirees, wealthier or better educated. Only a statistical approach which controls for these factors can tell us whether ethnic preferences are key.

The UK’s excellent ONS Longitudinal Study and Understanding Society longitudinal survey ask people about their political and ideological leanings, English national identity and other questions that will help us to compare white British people who remain in diverse areas with those who leave. During 2013 we hope to provide a definitive answer as to whether conservative, Daily Mail-reading whites who identify as English are more likely to leave diverse neighbourhoods than liberal whites who identify as British. We also look at interconnections between white working-class mobility, opinion on immigration and far right voting.

American and British research shows that minorities are moving out of their areas of concentration to better neighbourhoods. However, white Americans tend to leave or avoid ‘majority minority’ neighbourhoods and seek out areas that are over 70 per cent white. Given the large increase in Hispanic and Asian populations in America, this is resulting in ever larger heavily-minority zones in America’s most diverse metropolitan areas. Whether Britain will follow in America’s footsteps is an open question: much will depend on the residential preferences of working-class British whites and whether they are able to realise them.

This was first published on the Demos blog.

Eric Kaufmann is Professor of Politics at Birkbeck College, University of London. He can be found on the web here.