The Arts Council this week announced which arts organisations it would be awarding funding to for the next three years. Under the biggest change to arts funding in a generation, 110 new organisations received funding but 206 lost out completely. Dr Dave O’Brien asks what we can learn from America, reviewing a recent book which details the ways in which the arts are funded via philanthropy across the pond. 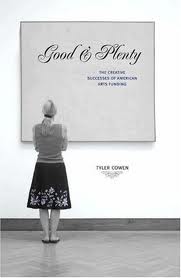 How best to support the arts and cultural sector in the UK? There has been extensive discussion of how best to encourage philanthropy, an approach favoured by the coalition. As the USA is often held up as the successful model for philanthropic funding of the arts, a book discussing the American approach, such as Tyler Cowen’s Good and Plenty: The Creative Success of American Arts Funding would seem to offer essential reading to policy makers, practitioners and the general public alike. However, whilst parts of the book identify the great tension between aesthetics and economics, overall the book does not justify its case that the American system of diverse sources of funding, particularly via philanthropy, is the most appropriate way to pay for the arts and cultural sector.

More importantly, the evidence for success of the American Model, both in the terms of aesthetic excellence and sectoral sustainability is highly questionable. Indeed, a recent paper, for the 2011 State of the Arts Conference, casts doubt on the notion of the American system as one that produces the kind of diverse arts and cultural sector we might wish to find here in the UK, in opposition to Good and Plenty’s rather unclear definition of a successful funding model.

At a point when arts and cultural organisations are considering the ramifications of the Arts Council’s decision of how best to deal with the 29% spending cut in its overall budget, it is vital that the kind of funding system we wish to see for the UK is debated and discussed. Whilst Good and Plenty may help us to understand the debate between economists and aestheticians, and strengthen the case for arts funding as R & D, it does not persuade that the American Model of philanthropy and indirect subsidy is one that should, or indeed could, be transplanted to the UK.

Dave O’Brien is a Lecturer in Cultural Industries at City University London. His work on cultural value includes a recent secondment and report to the UK’s Department for Culture Media and Sport. His work on urban cultural policy can be found in his PhD from the University of Liverpool, which explored the governance of the European Capital of Culture programme and cultural policy in Liverpool and Newcastle Gateshead. He has published several papers on this topic and is currently developing a book on the subject. Read more reviews by Dave.