Sylvia Nasar’s tour through the past 170 years of economic history introduces the reader to a dozen of the discipline’s most important figures, an equally compelling supporting cast, and the key economic events which shaped them, finds Garrick Hileman. 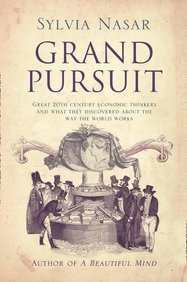 Grand Pursuit: The Story of Economic Genius is a book that I have been looking forward to reading with great anticipation. Sylvia Nasar’s previous work, A Beautiful Mind, provided an extraordinary journey into the pairing of creative genius and mental illness. The author’s remarkable account of Nobel Prize winner John Forbes Nash masterfully reconstructed what was arguably the modern era’s golden age in mathematics – mid-20th century Princeton University. Nasar’s portrait of this world and its cohabitants, which included intellectual giants such as Einstein, von Neumann, Oppenheimer, and Gödel, was utterly mesmerizing.

I also have a significant personal interest in Nasar’s decade-in-the making history of economics. Grand Pursuit includes a description of 19th and early 20th century London (my current home town), the story of several of the key figures in the history of the London School of Economics (where I am a PhD student), and an account of Cambridge University during the time of Marshall and Keynes (arguably the economics equivalent of what 1950s Princeton was for mathematics).

Like A Beautiful Mind, Nasar’s new book is aimed at readers who are interested in but not necessarily an expert on the underlying subject. Nasar’s tour through the past 170 years of primarily Anglo-American economic history introduces the reader to roughly a dozen of the discipline’s most important figures, an equally compelling supporting cast (i.e., the LSE’s Lionel Robbins, Bertrand Russell, Mary Paley and Ludwig Wittgenstein), and the key events which shaped their lives and ideas.

Grand Pursuit is organized chronologically around three Acts titled ‘Hope’ (pre-first World War), ‘Fear’ (a period covering both world wars and the interwar depression), and ‘Confidence’ (1944 Bretton Woods and onwards). The book begins in mid-Victorian London, a time when economic thinkers began to question whether, in the words of Edmund Burke, “nine Parts in ten” of humanity was condemned to “drudge through Life”. Profiles of Jane Austen and Charles Dickens, along with their popular works, help lay a scene of low social mobility, miserable living conditions, and political discontent. In the wake of the Industrial Revolution observable gains in the overall standard of living provide grounds for economic optimism. However, this first era of globalization is shattered by the early 20th century’s wars and depression. The book’s final act takes the reader up through the present day and the diffusion of economic gains, which much of the world beyond the West has begun to realize.

One of the book’s strengths are the personal histories of each economist. Her profiles are well researched, contain all sorts of interesting anecdotes, and are written with colorful language. For example, who knew that Schumpeter’s American colleagues were simultaneously “charmed” and “astonished” by personal habits such as his “taking an hour every day to complete his toilette”.

Another strong point is the author’s readiness to point out major reversals or contradictions in the intellectual views of her protagonists. These occur frequently enough that they would almost seem a prerequisite for consideration as an economic genius. Examples include Amartya Sen’s support in the 1960s for Nehru’s Soviet styled Indian economy (which Sen later renounced), Hayek’s late 1930s endorsement of Maynard Keynes’ government planning proposals, and Milton Friedman’s strong support for Roosevelt’s government expanding New Deal. Clearly many of those profiled agreed with Lord Keynes’ famous retort to being called a flip-flopper: “When the facts change, I change my mind. What do you do, sir?”

One of the intriguing and inevitably controversial aspects of Grand Pursuit are the people Nasar places under the heading of ‘genius’. There are the familiar names (Keynes), the not-as-familiar (Beatrice Webb), and the controversial (Marx). In the case of Marx, of whom Nasar paints a rather unflattering portrait, it’s not clear whether she counts him as an economic genius or not. Whether Nasar’s chosen protagonists represent the pinnacle of economics over the past century and a half is endlessly debatable. However, the combined influence of Nasar’s selections is difficult to argue against. Perhaps a more accurate, albeit less catchy, sub-title for the book would have been The Story of the Most Influential Economists?

Other reviewers have compared Nasar’s book to Heilbroner’s venerable The Worldly Philosophers, which is now in its seventh edition. How does Grand Pursuit compare? While Nasar’s book has a number of strengths I found it disappointing overall and unlikely to stand the test of time in the same way as Heilbroner’s classic. My dissatisfaction may be due in part to my own high expectations and the book’s coverage of more well-trodden ground compared to A Beautiful Mind. But the book also has several noteworthy shortcomings.

While Grand Pursuit follows the upswing in the standard of living for an ever-increasing proportion of the population Nasar does a poor job of linking the contributions of those she profiles with this progression. How much credit, for example, do Irving Fischer or Paul Samuelson deserve for economics gains derived from their contributions? Rather than addressing this question the preponderance of the book is spent delving into personal histories and personalities. While Nasar discloses up front that her book is not intended as a history of economic thought A Beautiful Mind demonstrated her gift at introducing abstract and complex subjects to non-experts. I personally would have liked to have seen more effort spent explaining and assessing the intellectual contributions of her protagonists. An example of a book which does this well and covers similar, although narrower, terrain is Justin Fox’s The Myth of the Rational Market.

Another criticism I have is with the flow of the book, which seems to meander and skip around, often without any clear sense of direction. Entire chapters, such as the one covering Joan Robinson’s visit to Mao’s China and her failure to identify the 20th century’s greatest famine, seem somewhat appendaged to the book. The intellectual linkages between protagonists are also not always clearly identified. And there are a surprising number of errors and typos for a book that was written over a ten year period, as if a mad-rush to print was made before the next financial crisis strikes.

Building on this last point, one of Nasar’s major conclusions which I would disagree with is the claim that economics has become “an instrument of mastery”. I was surprised to see her make this statement given the ongoing financial crisis and vigorous, divided debate in the economics community about the proper way forward. It is not yet clear whether the final Act in the history of economics is ready to be characterized as ‘Confidence’.