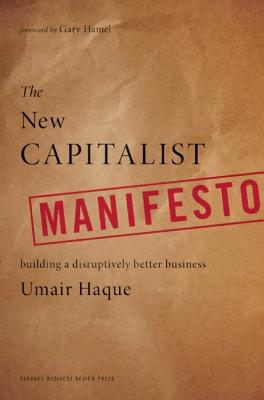 It might seem like a good time to launch a New Capitalist Manifesto: protestors are camped out in front of St. Paul’s cathedral in London as part of a global movement of occupations highlighting the injustices of the status quo. Umair Haque, however, is not contributing to the plethora of books on the financial crisis. Instead he has issued a call to arms for the capitalists of the twenty-first century to embrace a way of doing business that minimizes economic, social and environmental harm and maximizes prosperity; so far, so good.

Haque divides the corporate world into ‘incumbents’ – twentieth-century industrial capitalists – and ‘insurgents’ – twenty-first century innovators who are a ‘new generation of renegades’ at the cutting edge of a new, ‘constructive capitalism’. A sample of 250 companies is judged on what institutional premises they operate upon, or as he puts it, what ‘cornerstones’ of capitalism they adhere to. Apple, Google, Tata, Walmart, Nike and Starbucks are among the so-called ‘insurgents’ leading the charge. The old guard include Sony, Yahoo!, General Motors, McDonalds and Adidas.

The bulk of the book is dedicated to exploring how these so-called ‘cornerstones’ are evolving, or have evolved, as a result of innovation among the insurgent group of companies. Nike has shown how linearly structured ‘value chains’ can become ‘value cycles’ in which products are recycled, reused and even resold. Google runs on a set of principles that amounts to a ‘philosophy’, which allows it to weather failure better than other companies. All the while Haque strives to be the impartial observer to these changes, citing Adam Smith and Joseph Schumpeter as the forerunners of such an exercise, but sadly with no more than a cursory reference to their contributions.

Reading about how company x is boosting ‘socio-productivity’ and how company y’s management philosophy makes it a leader in its market creates a sense of gloss to the book. Moreover, the list of Haque’s adored ‘renegade’ innovators might seem surprising to some. Though the book tries to emphasize environmental sustainability, the conditions in which products are made won’t be revealed here. Apple, for example, subcontracts production of its iPhones and iPads to a Chinese manufacturer called Foxconn, who, incidentally, also supply Sony. A string of suicides in Foxconn factories last year threw light on the poor working conditions and long hours that young migrants making Apple products endure. Call me cynical, but is Apple not still in the business of selling high-end electronics produced at the cheapest possible cost?

The style in which the book is written makes it a little difficult to absorb all of the content. Haque outlines new concepts and terms with a frequency that is dizzying. On one page I count fifteen italicizations, prompting me to stress words such as aren’t and they in my head and making the book an arduous struggle to read. It is also remarkable for what is omitted. There is no direct mention of corporate social responsibility (CSR), perhaps a sullied term for glorified PR to today’s marketing gurus, and thus no engagement with its critics. But if we understand CSR as the attempt to align social objectives and business outcomes then that’s exactly what Haque is talking about.

The book is published by Harvard Business Review Press, so there is no doubting that its target audience is the upper echelons of the management, marketing and executive worlds, even if Haque intended it as a popular manifesto. The author’s excitement at the institutional changes effected by the ‘insurgent’ companies is palpable, and he intently pursues the idea of “capitalism with a human face”. Nevertheless, the manifesto’s constant positioning of “old” capitalism against “new” capitalism is wholly unconvincing, despite the endless examples of well-meaning multi-national firms.