Sasha Jesperson finds a call for a new approach to violence in Northern Ireland and other areas of the world in Audra Mitchell‘s insightful work. 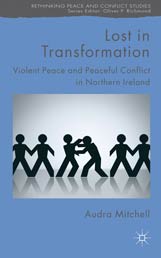 Audra Mitchell’s recent book Lost in Transformation: Violent Peace and Peaceful Conflict in Northern Ireland applies a fresh lens to the transformation of the Northern Ireland conflict by unpacking the peace process and what it has meant for all of the groups involved.

The main premise of the book is that peacebuilding can in fact be an act of violence, while conflict may be a “crucial means for resisting, constraining and preventing it”. Rather than using particular models of peacebuilding, Mitchell advocates for “supporting plural world building by creating the conditions in which plural worlds can exist non-violently”. Instead of forcing previously conflicting groups to come together peacefully, Mitchell argues they should be supported to negotiate their relationship through non-violent conflict. As such, Mitchell’s argument adds weight to the theory that violence ends when warring parties believe there is more to be gained from the ballot box, a form of non-violent conflict.

The book aims to rethink the relationships between peace, conflict and violence through an examination of the Northern Ireland peace process. While the peace process has been widely regarded as a success, and exported as a model for peacebuilding, Mitchell treats it with caution. She argues that the current increase in violence in Northern Ireland is directly related to the transformation process.

Mitchell breaks down the assumed causal relationship between conflict and violence. Forming the foundation of her argument throughout the book, Mitchell contends that an “inability to conflict is most likely to foster violence, rather than conflict itself”. As such, peace interventions based on the assumption that conflict equals violence may work to prevent conflict, which creates irresistible threats to “worlds”, often resulting in violence. “The ability to create, sustain and engage with multiple worlds is an essential and unique facet of human life. The destruction or elimination of worlds is experienced as a severe threat and when it occurs in ways that cannot be resisted or prevented is manifested as violence”.

Although the focus of the book is Northern Ireland, Mitchell suggests a new direction in theories of violence, conflict and critical peace and conflict studies. In advocating for plural “world building”, she implies that divided societies can never live harmoniously in a ‘multi-world’ setting. This argument is in contrast with attempts to move beyond toleration towards an integrated society, such as current practices in Bosnia and Herzegovina. More time is needed to determine which would be a more effective approach.

However, the strength of Mitchell’s analysis lies in her discussion of the dynamics within, rather than between groups. Through a discussion on ex-combatants, she develops a theory on long division, whereby those engaged in the transformative peace processes, usually group leaders, are pressured to “’divide in’ as much of their organisation as possible, while ‘dividing out’ those that threaten the process”. This practice, she argues, creates remainders, individuals who are excluded from the peace process or otherwise silenced. These remainders become dangerous because they become the “objects of radical violence intended either to integrate or eradicate them”.

These arguments provide a new analysis of why fresh outbursts of violence have been occurring. Mitchell challenges the common perception that recent violence is an attempt to block progress or bring back the Troubles by attacking the peace process. Instead, she argues that the acts are part of cycles of violence, partly caused by the transformation process.

As Mitchell is quick to explain, her analysis is not intended to justify the violent actions of any groups. However, it does provide a useful entry point to understand the violence. As such, Mitchell’s book serves as a warning, and a call for a new approach to the violence in Northern Ireland.

Sasha Jesperson is a PhD student in the Department of Government at LSE.