Jennifer Hugh is impressed by a rounded and well referenced collection of essays on employment trends through the Blair and Brown years. 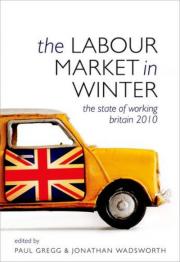 In the first essay, Gregg and Wadsworth find that employment did not rise as fast or as much as might have been expected given the experiences in the recessions of the 1980s and 1990s, and go on to identify a series of factors which might explain this, including government measures such as the fiscal stimulus, and the willingness of employees and employers to accept changing work practises to maintain jobs.

However, later chapters also identify that rises in unemployment have not hit all groups in society equally. For example, youth unemployment has remained a problem. Goujard et al. find that even in the boom times preceding 2008, youth unemployment did not respond wholly positively and that it had started to rise even before the financial crisis and subsequent recession. They blame this mainly on the government focussing on other groups such as the disabled and single parents, rejecting other possible explanations such as immigration or the minimum wage. In contrast, older workers are shown to have been far less affected by the recession. Indeed the numbers working have risen which the authors suggest could be because of the declining value of pensions.

The second section contains three chapters examining job quality, worker well-being, and the impact of family friendly policies. Generally, whilst the authors present a positive picture of these areas, particularly in the latter chapter, there is recognition that conclusions on job quality and worker well-being are partial.

The final section on inequality provides a useful counterpoint to some of the other more positive essays in that it shows that despite the evidence of positive employment trends in broad terms, inequalities persisted: in wage inequality; the gender wage gap; social mobility and for some ethnic minorities.

What is also clear from a number of chapters, is that even where there were substantive successes in reducing unemployment between 1997 and 2008, long-term inequalities have re-emerged in the recession: youth unemployment, low skills, and regional disparities. Whilst the boom years and Labour’s employment policies may have mitigated, if not resolved, these discrepancies to some extent by enabling greater employment opportunities, this has not proved to be sustainable during a recession. Indeed it is hardly surprising that issues which proved intractable during the boom are likely to be even more even more problematic during a recession. So whilst chapter 1 argues that in the overall picture, the dangers of unemployment were managed during the recession, it does appear that some elements were more manageable than others.

There are a good range of essays here examining different aspects of unemployment and employment, although a conclusion which is able to draw some of these strands together might have been useful. The contributors draw on a clearly referenced sources and trends are clearly identifiable and explanations enhanced by judicious use of graphs and tables.

As always when commenting on immediate events, the book does suffer to some extent from the speed of change in the British economy. Some of the findings, such as the differential impact on gender, already look dated. Taken as a whole, the essays recognise that although unemployment had been partially managed in comparison to previous recessions, the labour market remains fragile, growth is uncertain and the potential impact of global events is unpredictable. Nevertheless, it provides an essential overview of the labour market under Labour governments, 1997-2010 and a snapshot of the immediate impact of the 2008-9 recession which will be of interest to academics, students and to the general reader interested in employment trends. One final comment: given that these essays do show some good news on employment trends during the 2008-10 recession, perhaps The Labour Market in Winter is an unduly pessimistic a title; certainly it is not clear, that in terms of unemployment, we have yet reached Spring.