Reflecting on his popular political blog And another thing…, Tom Harris MP hopes to give readers an insider’s view of the Labour Party in his new book Why I’m Right… And Everyone Else is Wrong. Charles Crawford is disappointed to find that in practice Harris’s entries read more like gossip than effective political comment, and concludes that Harris has produced not a book but a deflated bubble of ex-blogging. 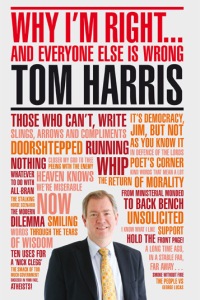 Why I’m right… And Everyone Else is Wrong. Tom Harris MP. Biteback Publishing. 2011.

Why I’m right… And Everyone Else is Wrong is a compilation of entries from a popular British political blog written by Tom Harris MP (representing Glasgow South) from March 2008 until November 2010 when he closed the blog down. On closing the blog, Harris wrote that blogging was having “a negative effect on my personal, family and political life … I’ve become a blogger who is also an MP rather than a politician who blogs, and that was never the aim”.

Tom Harris’ blog And another thing… achieved prominence in the British political blogosphere because it was unprecedented: a unique, cheerful, and (within limits) frank account of life as seen by a loyal Blairite junior Transport Minister who was sacked by Gordon Brown and then clung sorrowfully to the railings as Labour Titanic gurgled downwards. The main interest of this book is Harris’ middle-ranking “insider” view of this dismal period in the Labour Party’s history: nasty goings-on between Blairites and Brownites, the rise and fall of Gordon Brown, and tumultuous MPs’ expenses scandals.

Nevertheless, these are blog pieces made public as events happened, not brutal senior private diary entries revealed to an amazed world several years later. As Tom Harris puts it in the Introduction,”the blog became an exercise in self-restraint and discipline in how to write in an interesting and even loyal away about politics … What you want is gossip”.

Which is mainly what we get. Tom Harris’ rich but inchoate views on Doctor Who, Genesis and X-Factor are shared with folksy observations on the Westminster world as seen by a busy junior Minister and diligent MP. The book is organised not by date but by themes, which themselves cast light on Tom Harris’ tabloidly parochial instincts: “How do you solve a problem like Gordon?”; “Government: better than the alternative”; “In defence of politics”; “Telly”; and so on. If the European Union was mentioned in any serious way, I certainly missed it.

There may be no better way of presenting such previously blogged material, but the themes scarcely hang together. Effective political blogging delivers what the writer hopes are insightful thoughts on the emerging issues of the day, if not the hour. Detached from the flow of events, individual pieces lose impact and context.

Tom Harris does have trenchant views of a trenchantness calculated not to endear itself to cosy Left thinking. Thus on the terrible fate of Baby P (note: who died from appalling domestic abuse under the noses of official social workers): “Whatever God and the Bible says (sic) here’s what I say: sometimes it’s good to hate”.

On abortion: “if someone feels the number of abortions that take place in this country is too high, why is it he or she is accused of being a misogynist?”

On teenage girls getting pregnant: “Teenage girls shouldn’t be having underage sex. Why? Because it’s wrong”.

On Afghanistan: “some on the Left in Britain try to give the impression that they’re opposed to fascism while marching in support of the Taliban and Saddam’s former regime… They are liars and hypocrites”.

Trenchant indeed. In the ultimate act of Socialist Betrayal he even extols McDonald’s: “as far as I can see, they sell extremely tasty food at reasonable prices”.

All these opinions and more no doubt go down well enough among some Labour voters in Glasgow South, but nothing in the book suggests what body of belief and principle pulls such views together. There are teasing references to Mr Harris’ earlier convictions as an Evangelical Christian, and even his fleeting membership of the Conservative Party.

On 25 October 2010, just before he closed the blog, Tom Harris explained why he was not, in fact, a Conservative. Even here no political philosophy is identified. He blandly lists various policy positions and concludes that he is considered “insufferably right wing” because he actually believed in what the last Labour government did: “Tony Blair remains, for me, a brilliant and principled leader who (sic) I was proud to follow in the voting lobby”.

All in all, this is not a book but a bubble of ex-blogging, floating prettily in the air until it popped. Struggling through it I found myself recalling Jeeves’ famous description of Bertie Wooster (Thank You Jeeves, 1934): “mentally somewhat negligible but he has a heart of gold”.

As Tom Harris himself put it about his own blog: “If you believe that politicians take themselves too seriously, you might enjoy it. If you think they should take themselves very seriously indeed, or shouldn’t have any interests outside politics, I would avoid it, frankly. Try John Redwood.”

Charles Crawford’s blog www.charlescrawford.biz was voted one of the UK’s top 12 Independent Blogs in the 2011 Total Politics survey.

Why I’m right… And Everyone Else is Wrong. Tom Harris MP. Biteback Publishing. September 2011.

Book Review: Page One: Inside the New York Times and the future of journalism