The Chancellor’s new economic model may be built on unstable foundations. Lee Hopley argues the economy’s productive capacity will continue to be eroded if companies continue to delay expansion as they wait for a clearer growth forecast from the government.

The Chancellor’s speech yesterday got off to a promising start. He opened with a commitment to build a new economic model by backing businesses: giving them the confidence to hire, expand and innovate. Delivering a pro-growth budget is a difficult trick to pull off when there isn’t any spare cash.

The government stuck to its guns on delivering an internationally competitive corporate tax rate with a further cut to the headline rate, effective from April. It also reiterated its commitment to move the R&D tax credit above the line and to take steps to scrap the 50p rate.

That’s all good news for some companies, but further down the supply chain, the signal for hiring and expanding was considerably less clear. Continuous steps to ease the flow of finance and to lower the cost of it down will help. But the strong investment intentions we’ve seen amongst our members have yet to translate into increased capital expenditure. There are still some big question marks around whether this budget will do anything to get companies to make that commitment immediately and in the UK.

The Office for Budget Responsibility would seem to agree. Going back to the Autumn statement, the government’s official forecaster was expecting a strong 7.7 per cent year on year expansion in business investment. This was to be  the biggest contributor to overall growth. This expansion was a much needed turnaround from the previous decade and the foundation for better balanced growth in the medium term.

But the picture on investment is now much less optimistic. While GDP overall should fare better, investment is now forecast to increase by less than 1 per cent. This won’t be a concern for policy makers right now. A technical recession will be avoided albeit with an uneven quarterly growth path through 2012.

But beyond that? The Chancellor’s new economic model may be built on unstable foundations. The economy’s productive capacity will continue to be eroded if companies continue to postpone investments in modern machinery. This bodes ill for our ability to compete and gain market share in growing world markets, or deliver £1 trillion of export sales by 2020.

Manufacturers wanted a clear sense of what the government’s growth priorities are, and measures in this and every budget between now and the end of parliament to make them a reality. The Chancellor kicked off with some good ideas, but rebalancing the economy looks as challenging now as it did yesterday morning. 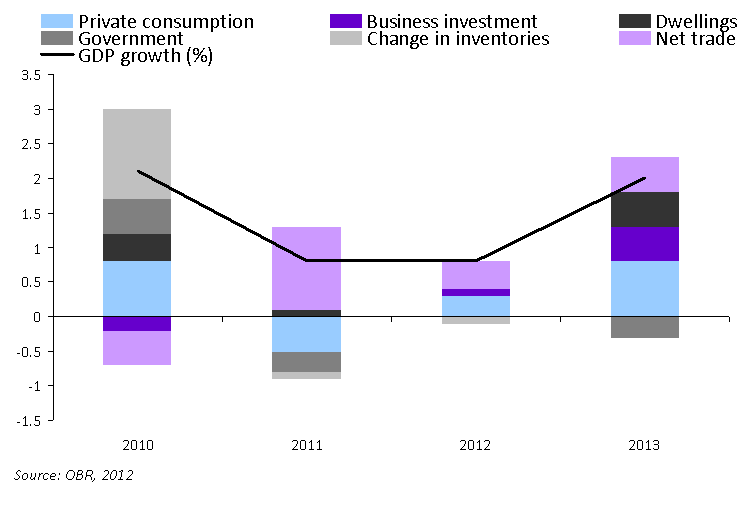 Lee Hopley is chief economist at EEF and blogs at http://www.eef.org.uk/blog