Lee Elliot Major and Stephen Machin explain just how badly those aged under 25 appear to be faring in the labour market. They outline five proposals through which the government can help address both the classroom and workplace inequalities facing this generation.

‘Life is unfair’ is a common refrain uttered by children. It will be a sentiment acutely felt by thousands of teenagers (and their parents) more than ever in this year’s unprecedented exam grades season. Many will feel they have been harshly treated by a system cobbled together to estimate A-level and GCSE grades following the cancellation of exams in the wake of COVID-19.

What will the furore mean for disadvantaged students, and for long-term social mobility trends? The system of calculated grades, using historical school data, sought to maintain the same broad distribution of grades as for previous cohorts. Exam regulators in England reported that this system had not increased the socio-economic gap in results between poorer pupils and their more privileged counterparts.

But it is now unclear how this gap will change in light of the very different last-minute U-turn policies enacted by governments in England, Wales, Northern Ireland and Scotland to allow grades to be bumped up. In Scotland, where grades will be based on teacher assessments, the gap has narrowed; in Wales, a minimum threshold has been introduced; in England, where mock exams can be used instead, the fear will be that this could further disadvantage poorer pupils. What is certain is that the credibility of 2020’s grades has been seriously undermined. Universities and employers will be understandably nervous about the results. It will also cast doubt on another aspect of fairness. If students now end up with inflated grades in 2020, then that will not be fair on those taking exams next year.

Our research reveals that injustices are set in train long before examination grades are produced; and they are likely to extend for decades into the future. Social mobility is shaped by inequalities both outside and inside education. And on both counts, the COVID generation, the under 25s, currently look like the generation whose luck has run out.

Education as a race

Social mobility research tells us that education operates primarily as a positional good. What matters is how much better you have done than your fellow pupils – and whether you have got the marks that allow you to get into sixth form or university or to get a job. If education is a race then those from poorer backgrounds are penalised from the start. And at every hurdle they face a bigger fall.

Partial school closures during the pandemic have exposed the stark inequalities in children’s home lives. Often living in cramped and crowded conditions, without computers let alone help from private tutors, disadvantaged pupils have suffered devastating learning losses. Many have had to take on work to ensure their families survive. Our research project ‘Generation COVID and Social Mobility’ aims to produce robust estimates of the losses suffered. Early indications suggest that poorer pupils have fallen significantly further behind their more privileged peers, thus reinforcing and widening already existent educational inequality.

At the same time, because of rising labour market inequalities and job losses that disproportionately impacting particular sections of society, the education stakes are now higher than ever before. Failure to pass a grade may result in longer-term scarring exacerbated by the recession: unemployment and lower wages that will persist over the life cycle.

The COVID-19 recession is already showing sharply uneven effects that are raising labour market inequalities. Experiencing job loss, reduced hours of work or being furloughed are all affecting the already disadvantaged by more. Yet these inequalities are taking time to show up in official statistics. The unemployment rate is stable, but not because the labour market has little slack, but because much of the job loss and hours cuts are not yet visible in data.

The COVID generation is not faring well in the labour market. Recent analysis calculates a realistic employment rate where individuals in jobs but doing zero hours of work are treated as not working. In the post-lockdown period (April to June), this matters massively. The figure below shows the realistic employment rate for those aged between 18-64 drops by 16 percentage points between February and June 2020. In February, 78% were working. This drops to 54% in April when there was complete lockdown, and whilst rebounding a little, it remains far lower by June at 62%.

The situation is considerably worse for those aged 18-24. Their realistic employment rate drops by an enormous 34 percentage points between February and April, and then only recovers on the easing of lockdown to be 26 percentage points lower at 47% by June. 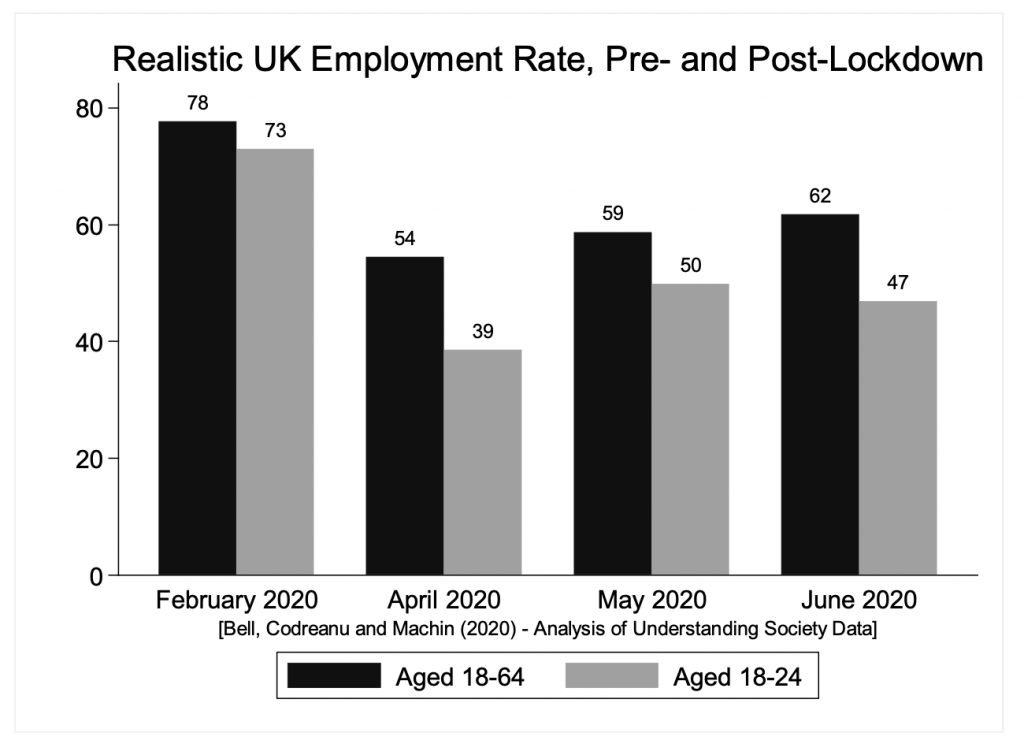 From a social mobility perspective, this does not bode well for the young generation – school leavers and university graduates – who have yet to move into their first jobs. It seems inevitable that they will be hard hit, especially those from lower income backgrounds and with lower educational levels who would be likely to work in the sectors that the COVID recession has, and will, continue to decimate. This includes employment in the services and hospitality sectors, for example, which disproportionately employ younger and lower-paid workers.

We believe there are five ways the government could help to level up an even more unequal playing field created by the pandemic. Education and employment have become central battlegrounds for this government as part of its ‘levelling-up’ agenda. The key insight from our research is to address both inequalities in the classroom and the workplace.

First, we need assurances for the one million students getting A-level and GCSE grades in 2020, that universities, colleges, sixth forms and employers will make even greater efforts to identify and enrol talented pupils from poorer backgrounds. That means clear lower grade offers for those pupils who can show they have been particularly disadvantaged during these difficult times. Extra support will also be needed to ensure poorer pupils are not further disadvantaged when appealing against grades or taking school exams in the autumn.

Second, we need children to return to face-to-face teaching as soon as possible. As soon as the exam season subsides attention will switch to the school start in September. Our evidence on the long-term damage from learning loss is clear. We welcome the government’s National Tutoring Programme, and hope it will provide schools with access to extra tutoring support – although details of how this will be implemented in practice remain unclear.

Third, we should guarantee jobs for those who are at risk of long-term unemployment. The huge economic, psychological, and social costs of long-term unemployment must be avoided at all costs. These jobs could be productive for the country in other ways, creating a more sustainable environment, for example. Parental unemployment is damaging to individual life prospects, but also has negative impacts on the future educational outcomes of children.

Fourth, we need to create a proper vocational and training system. That means a credible vocational stream in schools from the age of 14, and a lifelong levy to support training in the workplace (to replace the current apprenticeship levy). Retraining will become even more important as people seek new jobs in the post-COVID world. There could be incentives for reskilling in the tax system, in the form of human capital tax credits.

Fifth, we should introduce a one-off progressive wealth tax assessed on the net worth of the top 1% of richest individuals. As we look to recover from the COVID-19 recession, economic history suggests that such a tax would put the country on a path of inclusive growth and economic rejuvenation. This would be enough to repay all the extra debt due to the pandemic after ten years.

As the summer’s debate over exam grades rages, the biggest worry is that we all collectively fail the social mobility test: education and employment during COVID-19 will become the great differentiators, not the great equalisers we all hope for. If we fail a whole generation, that certainly would be unfair.

Note: ‘Generation COVID and Social Mobility: Evidence and Policy’ is a UKRI ESRC-funded project which will produce a detailed assessment of COVID-19’s impact on education and economic inequalities facing younger generations and study the longer-term consequences for social mobility in the UK. The authors’ book What Do We Know and What Should We Do About Social Mobility? will also be published by Sage in 2020. 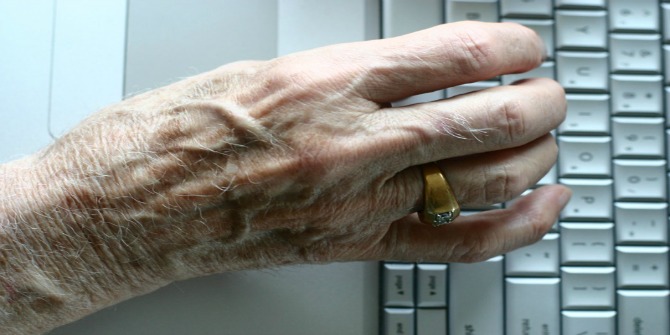