Police officers more frequently stop and search members of the public in neighbourhoods where well-off and economically precarious people co-exist. Joel H. Suss and Thiago R. Oliveira show that this pattern holds up even when accounting for other important factors, such as previous local crime rates and a neighbourhood’s ethnic makeup. Although the evidence is that stop and search activity does little to reduce crime, the police persist with the practice in order to maintain social order.

Increases in the police use of stop and search powers in the UK are often followed by intense public discussions about the effectiveness of such policies. Policymakers usually defend stop/search practices praising their effective deterrent effects, especially on drug offences and knife crimes. However, previous work both in the UK and elsewhere has demonstrated that pulling up citizens for searches has at best a marginal effect on preventing future offending behaviour. In London specifically, only drug offences appear to be affected by an increase in stop/search practices, and only to a small extent. So, what lies behind the persistence of this policing strategy?

Previous research over decades has suggested that stop/search is not solely about crime-fighting, rather it is also about social order maintenance – i.e. it is a tool used by police officers to assert power and control in a situation or locale. This argument finds support in studies about who tends to be stopped and searched by police officers. For England and Wales, ethnic disparities in stop/search suggest that police officers tend to discriminate against black and minority ethnic (BAME) groups in comparison with white citizens.

In a new paper, we focus on where stop/search practices tend to concentrate. If they are indeed employed as a tool of social control, economic inequality is likely to play a role, with more stops occurred in more unequal locations, even when holding previous crime rates and other demographic characteristics constant. According to a model of social control, aspects of police behaviour and activity can be seen as seeking to ‘subordinate sections of society’, who can be deemed by police officers as more inherently criminal. Poor people are one such section of society, and it is therefore in areas where the poor and the well-off or rich live side-by-side that police are either more likely to be deployed, or are more primed to wield stop/search as a tool of social control – to protect one segment of society from other subordinate sections of society. 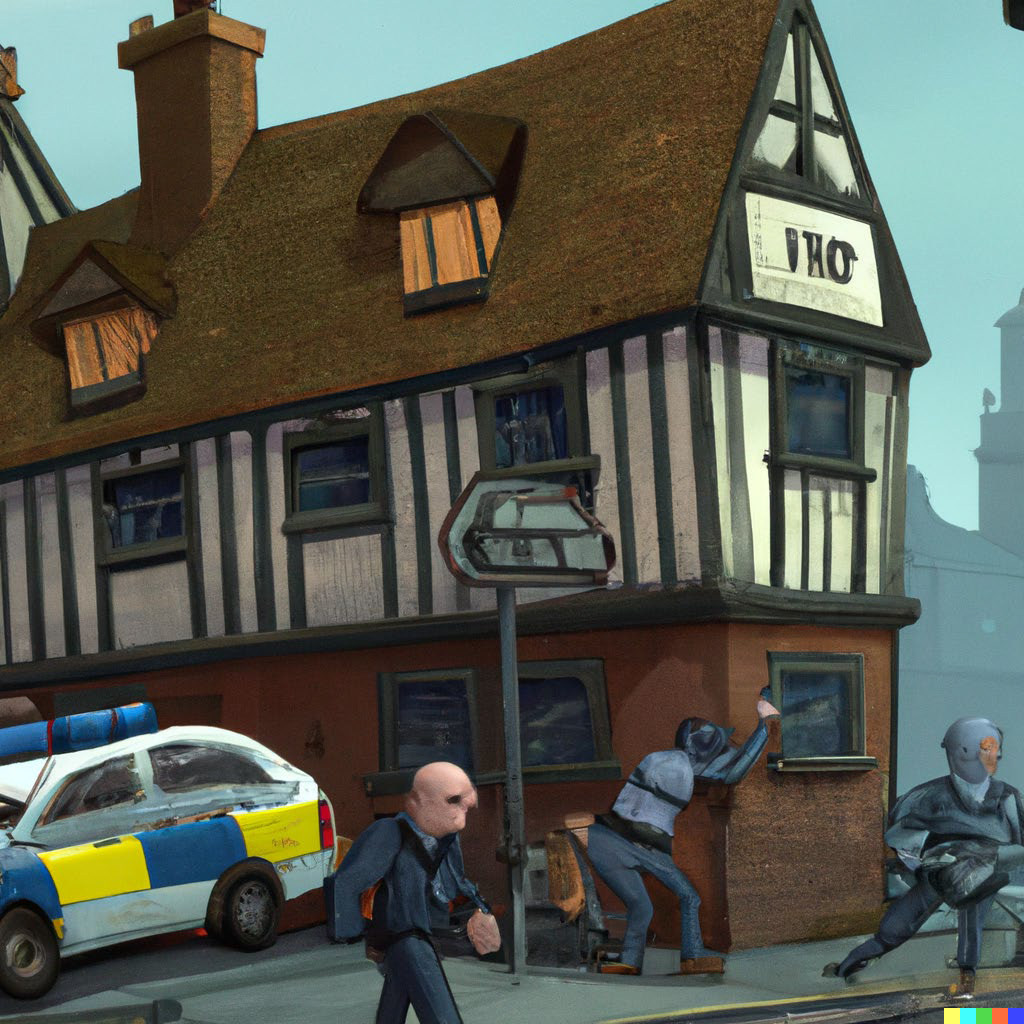 Image created by the authors with DALLE-2.

Measuring inequality and stop/search at the neighbourhood-level in London

To test our hypothesis, we use a novel measure of salient, spatially granular economic inequality at the neighbourhood-level. This was developed in a recent paper and is based on the estimated value of around 23 million UK residential properties. Chart 1 shows the spatial distribution of housing value inequality for London in 2019 at the neighbourhood-level, as measured by the Gini coefficient – a commonly used measure of economic inequality amongst social scientists. A Gini score of 0 indicates complete equality, and a score of 1 maximum inequality. As anyone who lives in London knows, very high levels of inequality are prevalent in many parts of the capital – areas in west and south west London tend to be highly unequal, while others are characterised by high degrees of equality (either by being relatively wealthy or poor). [For the geeks amongst our readers, inequality is calculated at a very small area level, called the Lower Super Output Area (LSOA). LSOAs are areas designed for census purposes to improve local statistics in England and Wales. They are also population-weighted and contain on average 1,691 residents (with a standard deviation of 263 above or below this mean).]

We combine this inequality information with stop and search data from all London neighbourhoods in 2019, as well as lots of other local information. [Again, for the geeks these controls were the average property price, population density, Index of Multiple Deprivation income and crime scores, the drugs crime rate, the proportion of residents who are non-white, distance to the nearest tube station, and the borough in which the neighbourhood is located]. Chart 2 shows the spatial distribution of the stop and search count by neighbourhood – it varies substantially, with larger concentrations of stops occurring in the lightest shaded areas, notably in Westminster borough, and extending into the south west parts of the capital, with a few other southern pockets. 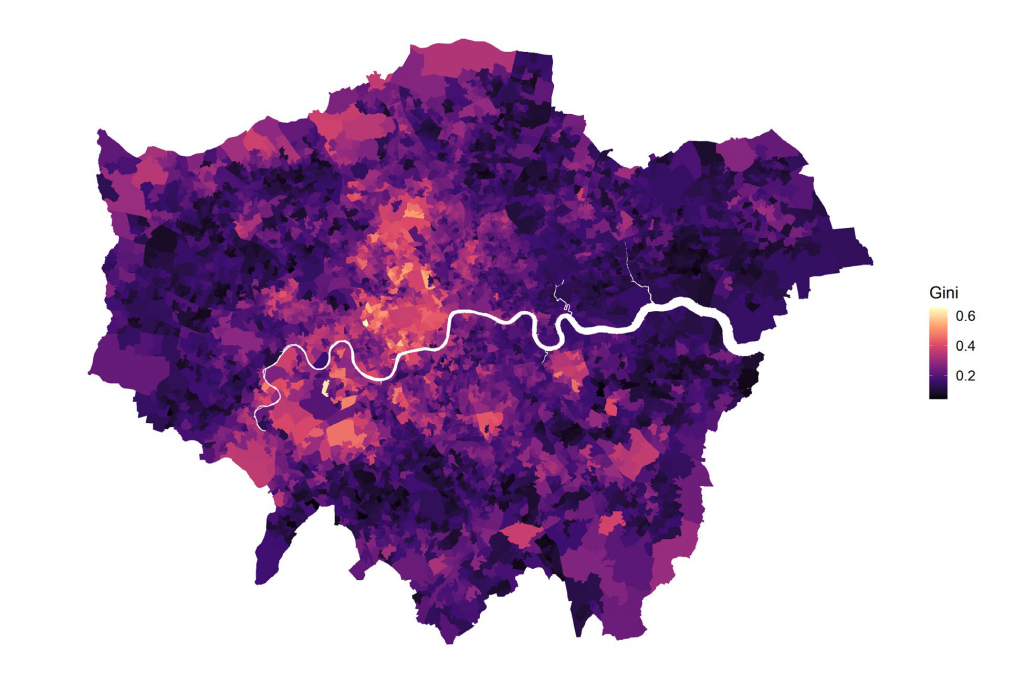 Note: The map shows the spatial distribution of within-neighbourhood housing value inequality for London, 2019. Data comes from “Measuring local, salient inequality in the UK” by Joel H. Suss and can be downloaded (here).

Chart 2: The number of stop and searches within local neighbourhoods – London, 2019 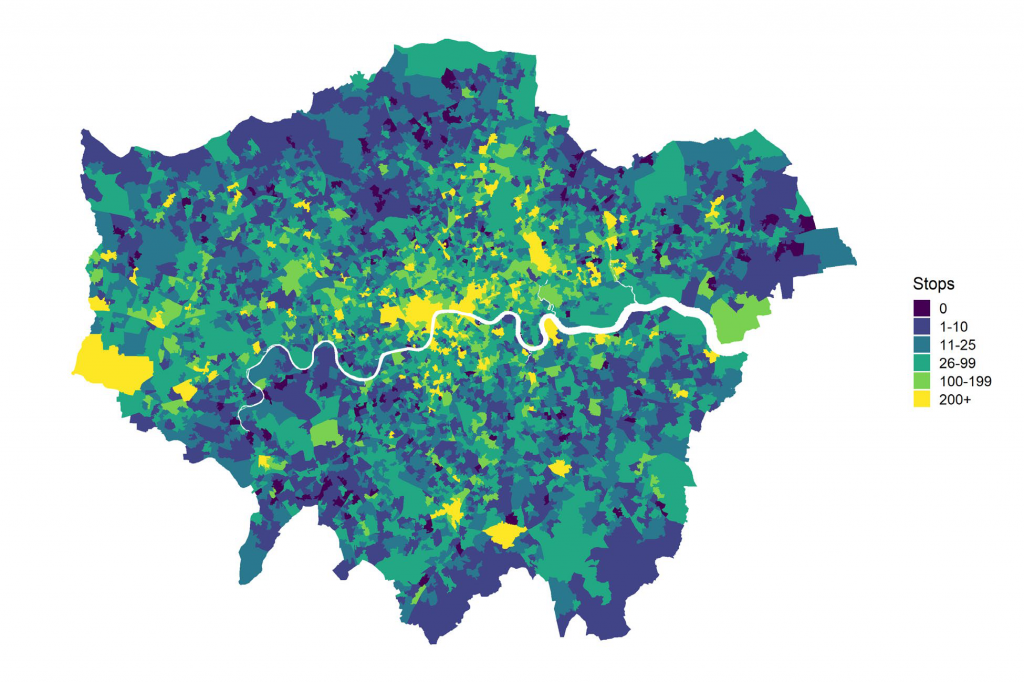 Note: The map shows the spatial distribution of police stops and searches in London at the neighbourhood-level, 2019. The data was downloaded from https://data.police.uk/.

Neighbourhood inequality is associated with stop/search

Putting these patterns together, and controlling for many other variables in the process, our analysis finds that the greater the level of economic inequality of a neighbourhood, the higher the number of stops. This relationship is clear, even when accounting for all other important control variables and spatial dependence (e.g. the possibility that inequality in adjoining neighbourhoods affects stop/search activity).

The expected number of stops is expected to increase by 33% for a one standard deviation increase in inequality (i.e. an increase in the Gini measure of inequality of 0.09), controlling for all other variables in the model. This is a large figure. To put it into perspective, the equivalent figure for the rate of drug offences is 52%, and the same score for crime deprivation is 25%. So, the expected percent increase in stop/search stemming from inequality is over half of the effect of drug offences and 8 percentage points larger than the effect of the crime score.

We also find that the effect of inequality on stop/search depends on the local level of affluence, with the magnitude of the effect getting larger as a neighbourhood’s affluence increases. This is a striking finding. When a given neighbourhood is characterised by high levels of income deprivation (i.e. is relatively poorer), the relationship between economic inequality and stop/search is weaker. When a neighbourhood is relatively affluent, the expected effect of economic inequality on the number of stop/searches is much higher. Chart 3 plots the predicted number of stops to visualise this, with the linear model assuming no interaction like that discussed above, and the right-hand Chart showing the marked effect when interaction is included. Relatively affluent areas (defined as being two standard deviations below the mean income deprivation score), are expected to see approximately five times fewer police stops when inequality is low versus when it is high (defined as two standard deviations below versus above the mean Gini value for inequality).

Chart 3: The effect of the interaction between inequality and income deprivation on predicted stop/search 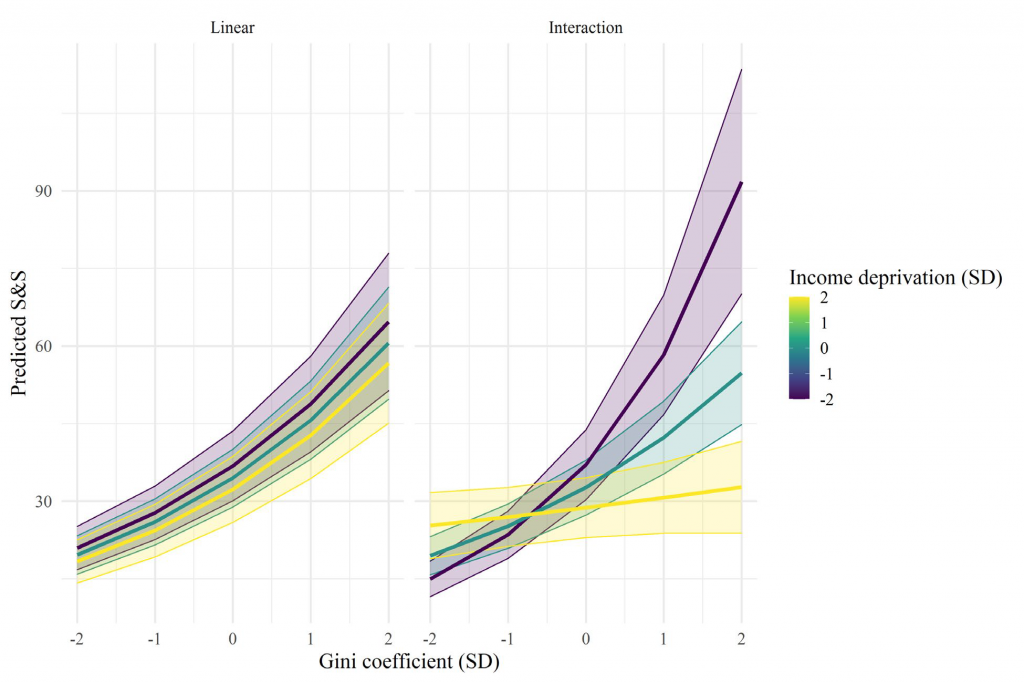 We also run a number of additional statistical checks, including verifying if our results are London-specific or whether the relationship between economic inequality and stop/search generalises to other urban contexts. To check this, we looked at three other major cities in England – Birmingham, Liverpool and Manchester. The results showed that local economic inequality is associated with a higher number of police stops and searches in these cities as well.

Stop/search as a tool of social control

In our recently published paper, we argue that highly unequal neighbourhoods could draw the attention of officers conducting police searches. The empirical evidence supports this hypothesis, suggesting that stop/search powers are indeed employed as a tool of social control, protecting and asserting power over some segments of society. The police contribute to maintaining social order by symbolically reproducing two groups of people: law-abiding citizens, who are the ones police officers seek to protect; and potential criminals, who are the ones that police officers police. Highly unequal neighbourhoods where the rich and the poor co-exist are areas in which the two groups get juxtaposed, with both citizens to protect and individuals to police occupying the streets, which attracts a heavier police presence. By disproportionately stopping and searching members of the public in economically unequal locations, police officers contribute to ascribe identity and maintain social order.

This article is based on the recently published and open access article entitled “Economic inequality and the spatial distribution of stop and search: evidence from London” in the British Journal of Criminology. Data and replication code available here.

Joel H. Suss is a Visiting Fellow at the LSE’s International Inequalities Institute (III) and Centre for Analysis of Social Exclusion (CASE). You can see more of his work on his website and find him on Twitter.

Thiago R. Oliveira is a Lecturer in Criminology at the University of Surrey and Associate Member at Nuffield College, University of Oxford. You can see more of his work on his website and find him on Twitter.