The 2008 global financial crisis unexpectedly thrust the nation state back to the centre of political and economic decision-making, and left much-vaunted global policy institutions struggling ineffectually. Yet Patrick Dunleavy argues that the huge government interventions triggered by the collapse of the economic ‘boom’ years have now very quickly sparked perverse efforts to deny that these events happened. A strong reluctance to recognise that society depends upon the state across many dimensions has been compounded by the sovereign debt crisis – as smaller European states buckle under the burden of forcibly socialized bank debts. Meanwhile the decline of west and the rise of the east and south in world politics increase the unease and anger in western public opinion.

In a 2009 book called Theories of the Democratic State, John Dryzek and I explored some key long-run trends of political thought during the last thirty years, including

We also charted the attempt to displace responsibility for government interventions upwards to the global level or region level (like the EU), with nation states apparently sidelined by their weakened efficacy in the face of global market trends.

However, in late 2008, very quickly and without much warning, nation states came swiftly back into focus as the key institutions averting the worst of the financial crisis, with their decisions also dominating the follow-on austerity period. My chart below shows the consequences in eight industrialized states for government spending as a share of GDP (which has increased) and for government net borrowing as a share of GDP (which has also grown strongly in many countries). In all countries the movement across the period from 2005 to 2009 has basically been downwards to the right, although a few countries show attempted moves back to the left in the 2010 projected numbers here.

Changes in government spending and borrowing across Western nations, from 2005 (top-left of chart) to 2010 (bottom right) 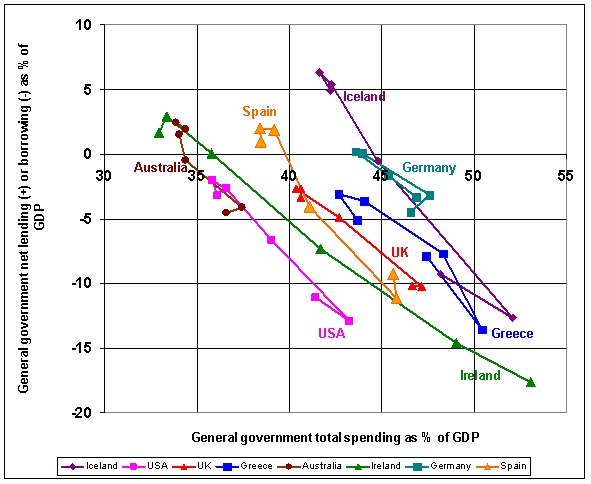 At the heart of the crisis government interventions were fatalistically endorsed even by the most right wing governments and interests, in order to avert an evident risk of imminent capitalist collapse. Yet national governments ‘stepping up to the plate’ has also sparked a perverse reaction to government that denies all efficacy or legitimacy to governments. We see a strong emotional and ideological rejection of the state in a range of contemporary phenomena, such as the Republicans’ push-back to strong right positions and the rise of the Tea Party movement in the USA. Liberal commentators have noted that Tea Party leaders and supporters display a super-strong disillusionment from politics and high levels of anger. Even conservative commentators note the movement’s ‘childish’ features.

In British politics Nick Clegg has led the Liberal Democrats so far off the political centre ground to the right that the party not only endorses but fuels the coalition government’s austerity push, while the Conservative backbenchers juvenilely shouted ‘More, more’ as George Osborne outlined public spending cuts. On both sides of the Atlantic these aversive reactions resemble the tantrums of a teenager, desperately needing their embarrassing Mum and Dad for income and transport, but psychologically unable to handle or even acknowledge this dependency in any way.

Modern societies depend on the nation state across the five key dimensions or spheres set out below. As these dependencies become apparent they can give rise to resentment and denial, particularly as change in one sphere can fuel a strong aversion in another, producing compound reactions.

The nation state is a critical institutional store of accumulated future value of tax receipts. As events since 2008 illustrate over and over again, it functions as the ultimate guarantor of economic life, markets and future economic survival, regardless of size. From the economic colossus of the US and the European economic powerhouse of Germany; through medium size economies like the UK, Spain, and most other EU countries and to small countries like Ireland, Greece and Portugal or micro-states like Iceland, the scale of bank lending in the boom years has trigged a (belated) recognition that states are critically undersized vis-à-vis the global economy. This became painfully clear during Iceland’s 2008 banking crisis and more so today with Ireland and the European PIGs (Portugal, Italy, Greece) facing sovereign debt crises.

Keynesianism (again) prevented system crises tipping over into economic collapse and proved that maintaining social safety nets are crucial for both limiting the depth of recession and for sustaining growth. This recognition even allowed Obama’s healthcare extension to pass in the US (which seems likely to survive republican efforts to scrap it). Yet this period has also triggered an extraordinarily aversive right wing media scape-goating of the welfare population and a profound reassertion of self-reliance and self-help as foundational values both in the UK and US. In the UK the government has capitalised on this atmosphere of debate by introducing forced labour plans for unemployed people and pushing for what even London mayor Boris Johnson has acknowledged as  ‘social cleansing’ of welfare populations from prosperous cities. These developments uneasily co-exist with a pervasive discourse of ‘fairness’ and commitments to protect the National Health Service and elderly pensions. Similarly schizophrenic phenomena include the protection of schools services while massively cutting state funding for higher education.

Within official and professional circles there has been an unprecedented change of heart. There is a new recognition that capitalism cannot (ever) avoid boom and bust cycles without external regulation, and that even with much tighter regulation the system will continue to experience very strong wobbles. The belief in light touch regulation and market rationality, which dominated the boom years, has been replaced by an effort to avert systemic threats that markets cannot adequately plan for. Yet while key actors inwardly recognise the need for re-regulation there is a weakness of will to effect real changes against corporate resistance. Instead, politicians rely on exhortations and rhetorical regulation alone to try and reign in the financial sector, such as cutting back bank bonuses. The need to concert actions internationally and the difficulties of dealing with ‘laggard’ nations further impedes progress.

During the credit crunch and financial crisis the global institutions of capitalism failed to work by moving too slowly and too remotely to create much co-ordinated action. Only actions by individual nation states stemmed complete collapse, because they could re-regulate quickly and draw on the ‘tax state’ capacity above to mount emergency bailouts, bank guarantees and now bank recapitalization. Any joint action cobbled together by states meeting in ‘emergency mode’ amounted to little more than opportunistic policies to paper over their fragmentation. The pre-eminence of nation states acting alone has continued into into the austerity and recovery phases. It is clear that the EU has fallen into a major crisis in the Eurozone with Germany’s renewed inwardness withdrawing a key lubricant of subsidies for the Euro area. The quasi-state institutions of Eurozone governance have crumbled in the face of the Eurozone sovereign debt crisis, which has rapidly extended into a wider crisis of the EU itself.

The collapse of the noughties economic boom crystallized in a sharpened form a long term recognition by voters at large that the era of European and then American dominance is over. The only ‘western’ state almost untouched by recession has been Australia, which is mostly locked into the wider Asian economy, especially exporting its mineral heritage to China. By contrast, most of the Asian states (except China) already took a big hit earlier in the 1997 Asian financial crisis and have not been as affected by the latest crisis.  In the US and Europe part of the revulsion against the state is therefore bound up with fears of Western economic decline versus the East and South- particularly China, India, and Brazil.

This dread of long-run decline is strongest in the USA and UK, where it is closely bound up in an additional and specific crisis of the western defence state, with its strong historic proclivity to rely on vigorous use of force overseas against ‘uncivilized’ states and peoples, and its reliance on advanced military/security technologies to counter a domestic shortage of (willing) military manpower. The conspicuous failure of the neo-liberal/Blairite hard power solutions – in Iraq and Afghanistan, and now also in Pakistan and along the Arabia/Africa border zone – has created strong public unease over the re-appearance of a West versus Islam mobilization (on both sides). This ‘clash of civilizations’, long-foretold and welcomed on the US right, has not worked out as planned. Instead it has created fears and denial pressures in American public opinion, which become manifest as an angry disbelief that the US state is no longer what it once was. Although the USA’s population will grow from 300 to 500 million people by 2050, relative economic decline is still likely to drain away America’ capacity to sustain world wide military hegemony.

In Europe the same reaction (plus the economic crisis) has sapped Turkey’s chances of ever joining the EU and wrecked Eurocrats’ ambitious earlier plans to stabilize its borders with Africa in the Sahara, south of the Mediterranean’s Arab states (which would have entered the European Economic Area).

We are now coming over the top of the post-crisis period of escalating state dependency. The forced austerity backlash still has a long way to run in the USA, the UK, Ireland, Spain and Greece. At worst, it has the potential to push all of their economies into deflation and prolonged recession, or at best to allow only sluggish recovery. Even if this threat recedes, the political and cultural reactions to state dependency still have a long way to run. In another post next week I will explore several ways in which the role of the state may be transformed in the long-term.