In this post, the team at electionforecast.co.uk discuss their predictions for the East and West Midlands. They find that the battle between the Conservatives and Labour to become the plurality party is likely to be decided in the Midlands.

See Cherry Miller’s analysis of the campaign in the (West) Midlands here.

The 105 constituencies that comprise the East and West Midlands sit at the geographic and political centre of the 2015 general election. In 2010, these constituencies were largely dominated by two-way contests between the Conservatives and Labour, with a small fraction contested by the Liberal Democrats. Since at least 1997, the party that won the most seats in the Midlands also won the most seats across the UK as a whole. At the last election, the Conservatives won 64 seats, Labour 39, and the Liberal Democrats 2. The plot and map below show the seats won by each party at the 2010 election. Our headline forecasts for the region suggest that there will be significant changes in 2015. In particular, we expect a much closer battle between Labour and the Conservatives for plurality status within the region.

The graph below gives our point predictions for each constituency in the region. Our current prediction is that Labour will increase their number of MPs to 51, but that the Conservatives will continue to be the largest party (just) with 54 Midland MPs. We predict that the Liberal Democrats will hold Birmingham, Yardley, but will lose Solihull to the Conservatives. 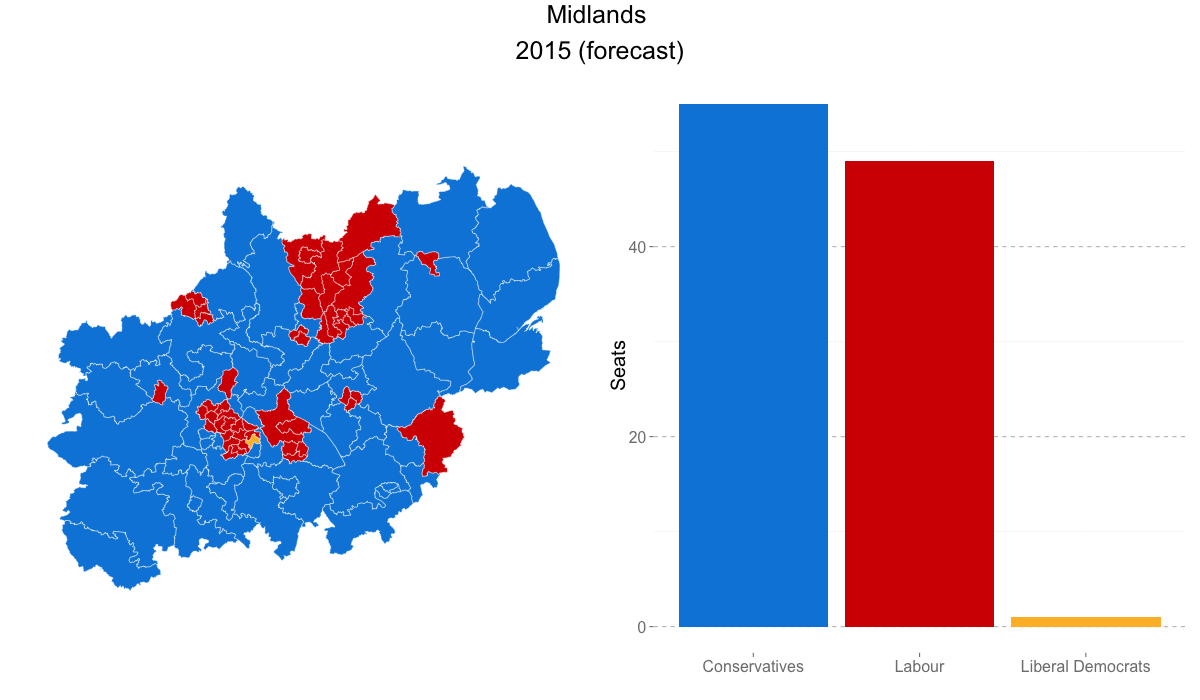 These point predictions suggest only a small lead for the Conservatives over Labour in the region, and, even with only hours to go before voters start filling their ballots, our forecasts are still marked by a significant degree of uncertainty. The probability that the Conservatives will be the largest party in the constituencies in the Midlands is 80%, and 20% for Labour.

The plot below shows the probability that Labour or the Conservatives will hold the most seats across the UK as a whole. The first bar for each party gives our baseline plurality probabilities, and the second bar gives the probability conditional on the party winning a plurality of seats in the Midlands. The graph makes clear the importance of winning the battle in the East and West Midlands for the two largest parties. Our baseline probability for the Conservatives being the plurality party is 66%. This increases to 83% if the Conservatives win most seats in the Midlands. For Labour, the increase is even more dramatic: from 32% in the baseline scenario, to 94% when they are the largest party in the region. (The missing percentage points in the baseline scenario come from the simulations in which the two largest parties are tied in their number of seats).

Much attention has been paid to bell-weather seats across the UK, but if the goal is to predict which party is likely to hold a plurality, you could do worse than to examine the regional contest in the Midlands. On Thursday night and Friday morning, broadcasters, pundits, voters, and political scientists will await the results in key marginal constituencies with baited breath. The bulk of the seats in the Midlands are unlikely to start trickling in until about 3am. When they do arrive, they will give the first indication of which party is likely to come out of the election as the largest party. 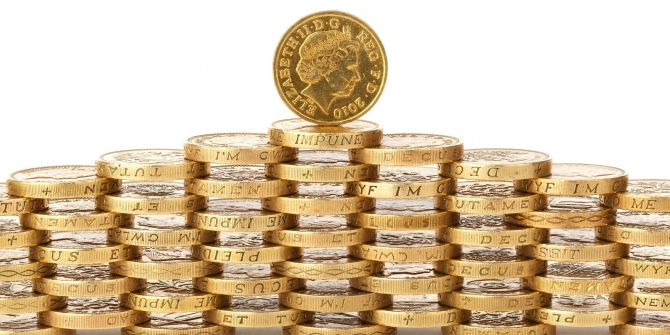