Decades of chronic housing undersupply have meant that housing price growth has consistently outstripped income growth, driving up costs across tenures and meaning that households spend a growing share of their disposable incomes on their accommodation. New research by Laura Gardiner examines the UK households that are spending more than half of their disposable income on housing costs. Most of the ‘housing pinched’ are working and more than a quarter live in London.

Reading the housing headlines recently you could be forgiven for breathing a sigh of relief. House prices have showed signs of cooling in recent months, thought to be partly down to tighter mortgage lending rules that have dampened down demand. In addition, at least outside of the South, private rents have been through a year of below-inflation increases on both government and many commercial indices. And the sustained period of historically low interest rates since the downturn has reduced the burden of ongoing housing costs for existing mortgage payers: we estimate that a household with a £75,000 tracker mortgage has saved around £12,400 since 2009 as a result of such a long period of low rates. In this light, perhaps the housing affordability problem we’ve become so familiar with isn’t one we need to worry about quite so much?

Such a view overlooks the long-term trajectory of housing affordability and the likely direction of travel in coming years. Decades of chronic housing undersupply have meant that housing price growth has consistently outstripped income growth, driving up costs across tenures and meaning that households spend a growing share of their disposable incomes on their accommodation. Indeed, between 2001-02 and the beginning of the economic downturn in 2008-09, the number of UK households spending more than a third of their net income on housing – the conventional benchmark for high costs relative to incomes – more than doubled. The years immediately following the downturn have seen what looks like a dip rather than a reversal in this trend.

Recent analysis by the Resolution Foundation has focused on a subset of this group who spend more than half of their disposable income on the ongoing costs of accommodation, a group we call the ‘housing pinched’. Finding out who these households are and where they live is an important first step in identifying the circumstances in which housing costs bite hardest and who needs most help.

Figure 1: Characteristics of UK households spending more than half of their net income on housing costs, 2011-12 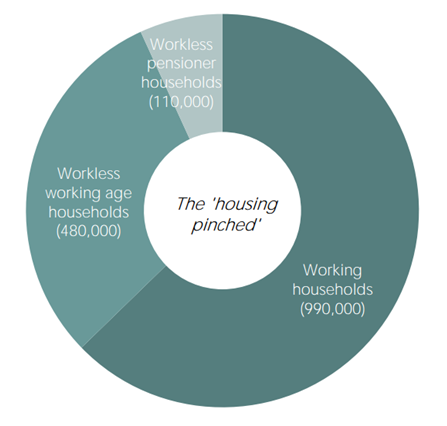 An important feature of this group is that it is not rich. It is reasonable to assume that spending very high proportions of net income on housing may be as much a choice made by households with high incomes as a constraint that high housing costs place on the less well off. After all, wealthier households have the relative freedom and capacity to live in larger houses in more sought-after areas, and in the case of mortgagors, to pay off debts more quickly. Even if these wealthier households spent a high share of their net income on housing, they would still have a comparably large amount, in cash terms, left over for other things.

But only a minority of households are in this position. Just 1 per cent of the 1 million working ‘housing pinched’ households lie in the top fifth of the income distribution, whereas 830,000 lie in the bottom half. Strikingly, in 2011-12 these 830,000 households had an average of just £60 per week left over after paying for their accommodation. The inadequacy of such a residual budget is highlighted by the fact that in 2012 the average household spent around £60 on each of food and non-alcoholic drinks; transport; and recreation and culture.

The data doesn’t allow us to look at what has happened to the ‘housing pinched’ since 2011-12 – but what might we expect? It is possible that their number may have been held down for some of the period since as low interest rates continued to be passed through to mortgage payers and nominal pay and incomes improved slightly. However, expectations for weak income growth across much of the distribution, house price growth and rises in interest rates in the near future are very likely to return us to the long-term trend of increasing numbers of UK households spending very high proportions of their disposable income on housing.

Most households will have found ways of coping with the pressure that spending very high proportions of income on housing causes, but the scope to accommodate further pressure if housing costs and incomes follow their expected paths may be limited. An understanding of which households were ‘housing pinched’ in 2011-12 is an understanding of which households are most at risk of falling over the edge.

Note: This article gives the views of the author, and not the position of the British Politics and Policy blog, nor of the London School of Economics. Please read our comments policy before posting. Featured image credit: Metro Centric CC BY 2.0

Laura Gardiner is Senior Research and Policy Analyst at the Resolution Foundation. She tweets from @lauracgardiner 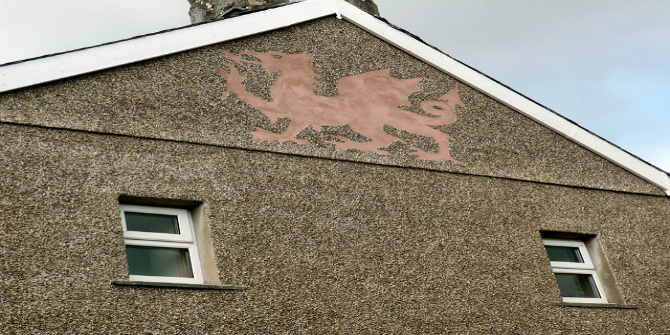