Voters are in the process of seeking comfortable places in a party system still reflecting old divides, writes Paula Surridge. She explains how changes within Labour’s constituency provide further evidence of a re-ordering of British politics, where the old divides of left and right gradually give way to generationally-based divides on social values.

The received wisdom on British electoral politics came under significant strain in 2017. From a starting point some 20 percentage points behind the Conservatives, the Labour party ended just over 2 points behind on polling day, leading some to question how this had changed the party and its supporters. But changes in the patterns of support for Labour have been occurring over a much longer period. In fact, over the last decade Labour support has been gradually becoming younger, more well educated, and more ‘liberal’. This is part of a longer-term realignment of the electorate where ‘values’ matter and where those among Labour’s traditional base who do not share the perceived values of the party have moved on.

Using data from the British Election Internet Panel Study (wave 13) and taking voting at the 2017 general election as the starting point, we can look back at the previous voting behaviour of Labour and non-Labour voters to identify different key groups of (ex)Labour supporters. The groups are defined according to their voting in 2017 and their previous voting in 2005, the last election at which Labour won an electoral majority. Data are included for England only due to the different party competition and links to identities elsewhere in the UK. Those too young to vote in 2005 are also excluded from analysis. The groups identified and their sample sizes are:

The socio-economic and demographic profile of each group of voters is shown in Table 1 (the proportion of each ‘type’ that is drawn from a social group). 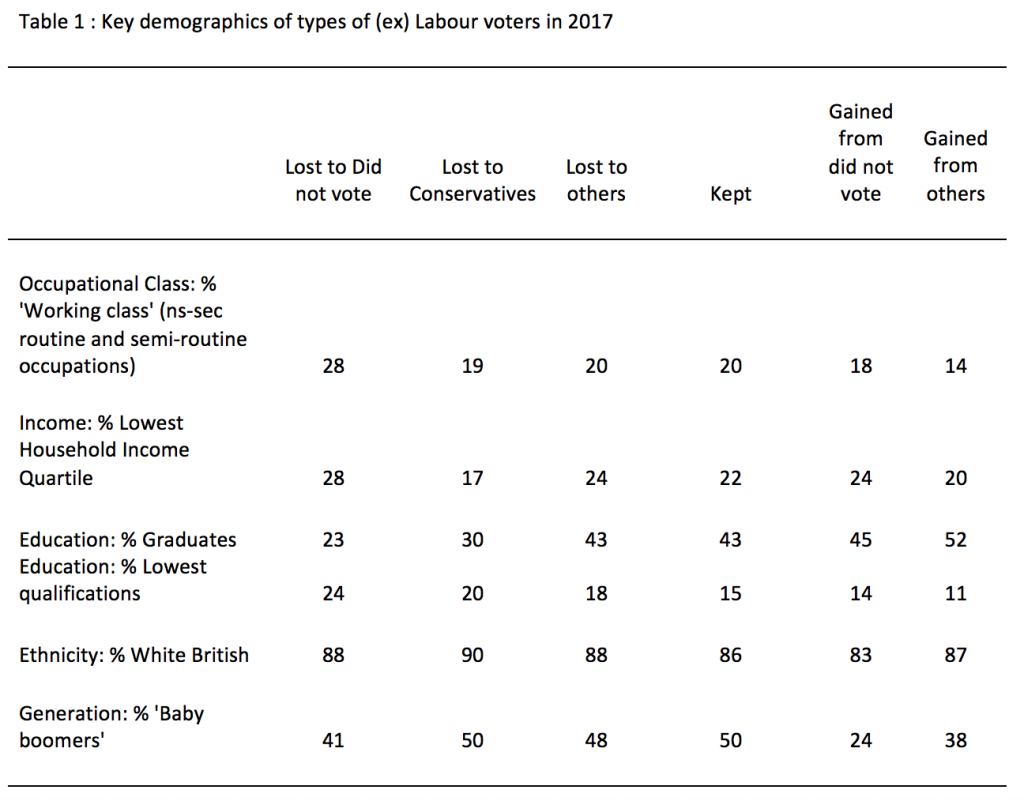 Differences according to economic characteristics are relatively small; there is a greater tendency for those who moved from Labour to non-voting to be drawn from working class occupations but little evidence that those who have moved to the party since 2005 are more likely to be middle class (a similar pattern is seen for household income).

Education and age differences are much more marked. The ‘kept’ and the ‘gained’ voters’ are much more likely to hold graduate level qualifications than those who did not vote Labour in 2017 having done so in 2005. Conversely, those who voted Conservative or who did not vote in 2017, having voted Labour in 2005, were much more likely to have the lowest levels of educational qualifications. Focussing on the ‘baby boomers’ also reveals substantial age differences; with voters ‘gained’ being younger than both those lost and those kept; half of those who voted Labour in 2017 and 2005 were ‘baby boomers’ compared with 1 in 4 of those who were gained from previous non-voting.

Some explanations for the changing patterns of voting according to age and education levels in the US have focussed on ‘identity politics’. Class and national identities of each group of voters, shown in Table 2, reinforces the pattern seen in the socio-demographic data; a majority of the ‘kept’ Labour voters describe themselves as ‘working class’ as do a majority of those who did not vote in 2017 having voted Labour in 2005. 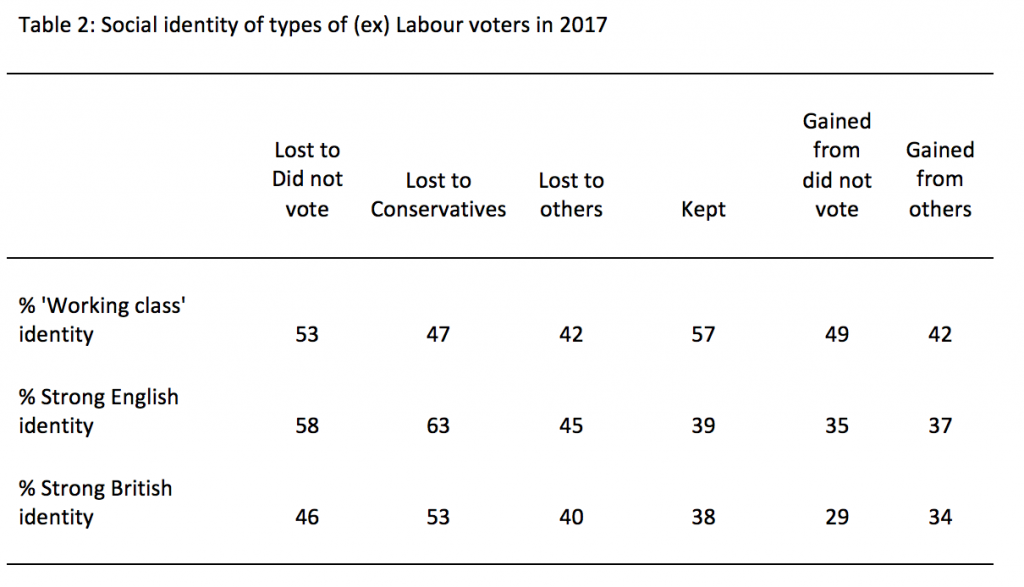 The ‘gained’ voters are little less likely to describe themselves as working class. A larger difference is found with respect to national identity than class identity. A majority of those who voted Conservative or did not vote in 2017 having voted Labour in 2005 hold a ‘very strong’ English identity (Englishness as ‘7’ on a 1-7 scale). Whilst among ‘kept’ voters and those gained between 2005 and 2017 less than 2 in 5 expressed ‘very strong’ Englishness.

The strengthening link between age, education, identity, and voting behaviour is observed elsewhere, notably in the US Presidential elections and in elections in Europe. This has been closely linked with the reordering of political debate from the traditional ‘left-right’ economic dimnsion to what is variously called the ‘liberal-authoritarian’, GAL-TAN, nationalist-cosmopolitan or sometimes simply ‘other’ dimension of values.

Figure 1 shows how each of our groups of voters were positioned on these scales. The scales are coded to take values between 0 and 10. 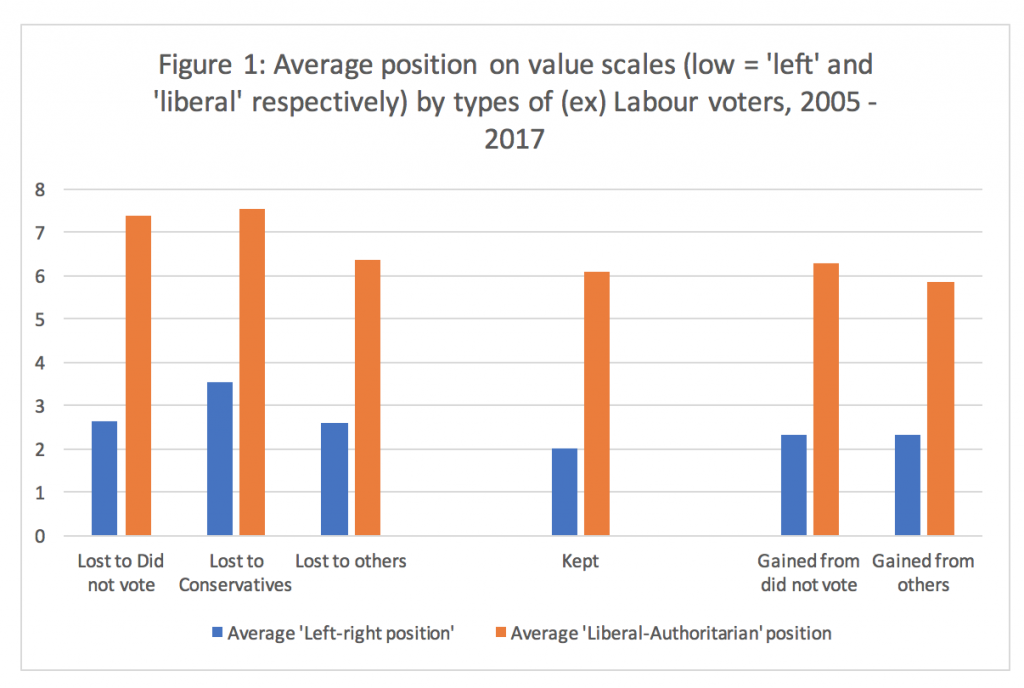 There are some differences between the groups on the traditional ‘left-right’ value scale. But these are small; with those switching to non-voting or other parties similar to those gained from elsewhere. Those who voted Labour in both 2017 and 2005 are the most ‘left’ on this scale; while those who moved to the Conservatives are a little more towards the centre of the scale, though still to the left of other Conservative voters (the average position for all Conservative voters in 2017 is 4.35).

Both age and education are strongly related to these ‘core’ values and multivariate analyses confirm that these differences are largely explained via their influences on values. The key factor which demarcates ‘lost’ Labour voters from those it retained are their social values. Voters moving to both the Conservatives and non-voting in 2017 from Labour voting in 2005 are notably more authoritarian (socially conservative) in their values than those who remained Labour voters and those ‘gained’ between 2005 and 2017.

This pattern in the electorate is similar to that found among Labour members; the party elite and their broader support base are becoming (a little) younger, better educated and noticeably more liberal over time. This process did not begin with Jeremy Corbyn, but was not reversed in 2017 either. This is further evidence of a re-ordering of British politics as the old divides of left and right gradually give way to new, generationally-based, divides on social values. This process has been occurring for some time but seems to have been given heightened salience through the EU Referendum and looks set to continue to challenge the received wisdom on British electoral politics for some time to come.

Note: the above draws on the author’s EPOP 2017 paper, “Leaving Labour: Values, valence and vote switching”. 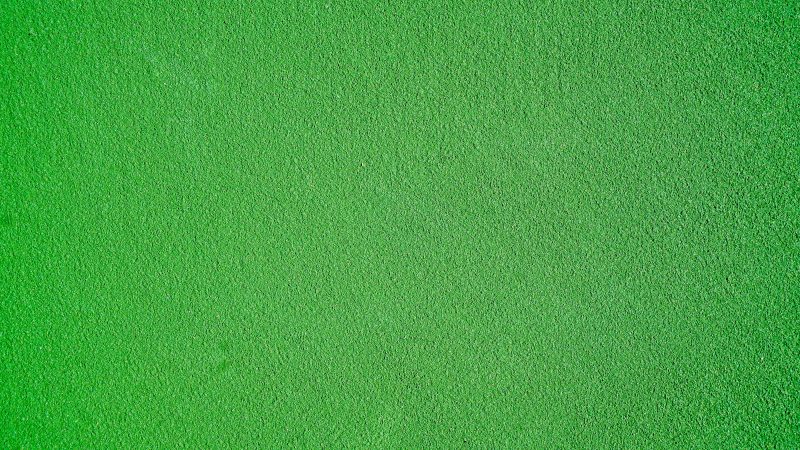