There is undoubtedly a major issue of political disengagement between voters and Westminster’s system of government. However, the Westminster political class appears to regard the solution to the current maladies as finding ways to reinforce the existing system, rather than embracing the need to re-think the current nature of politics. It is clear that many of the recommendations offered by the recent PCRC Report chime with the wider response to the UK political crisis. What we need from political leaders is a serious process of engagement with citizens that is capable of stepping beyond vested party interests, argue Martin Smith, Dave Richards and Patrick Diamond.

The recently published Political and Constitutional Committee’s Fourth Report on Voter Engagement in the UK has made a number of eminently sensible suggestions in relation to encouraging greater participation in politics. Since its creation in 2010, the Committee has taken seriously the task of both engaging with and deliberating on what has become one of the most salient, slow-then-quick burning political issues of our time. This is both welcome and to be applauded. We certainly support key recommendations in the PCRC report, not least the suggestion that: ‘When manifestos are being written, party leaderships make real, not least in England, the undertakings given to ending overcentralisation and to extending devolution, not least as a means of engaging the electorate much more in deciding their own affairs’. Nevertheless, there is something of a risk here of ‘fiddling while Rome burns’. The scale and nature of the reform proposals from the Committee illustrate two salient points:

The concern raised by this inquiry, but also in recent similar inquiries elsewhere, relates to the manner in which the issue is being framed.  From the Westminster perspective, the issue is depicted as being one of people feeling disengaged from traditional forms of Parliamentary politics. Consequently, the cure for this malady is to seek out whatever mechanisms might encourage engagement; the proposal to make it a legal requirement for people to vote; the provision of state funding for parties; awareness raising by illustrating the importance of Parliament and the commitment, diligence, hard work and indeed day-to-day challenges facing elected representatives; or even seeking a new climate of media reporting by persuading those in that profession to be less cynical, both about politics and politicians. In other words, the issue is being framed predominantly as one of nascence – how to find ways of breathing life back in to the institutions and the associated practices of Westminster politics.

Is this the right approach or starting point for addressing the 21st century pathology associated with the UK’s model of representative democracy? We have argued elsewhere that the problems faced by the British polity are much more fundamental than the approaches expressed above are willing to publicly acknowledge. The core mechanisms of our model of democracy are institutions formed in and by the 19th century: political parties and Parliament. As David Judge illustrated many years ago, the nature and type of parties we have are explicitly shaped by Parliament. Essentially, Labour, Liberals and Conservatives were created within Parliament and this has left an indelible mark on each of them. They were not social or political movements that then sought election, but parties created as the franchise was expanded to reflect new social interests within parliamentary institutions.

The outcome of this is the embedding of what has been referred to as a dominant British political tradition: a political culture formulated on a top-down, leadership view of democracy. The vehicle for sustaining this elitist tradition has been, since the mid-nineteenth century, its two core institutions, Parliament and political parties. Hence, we have in practice a series of parliamentary dominated parties that seek election in order to govern from Westminster. Representation occurs through people voting for or joining parties, and through party candidates they have their interests represented.

One of the legacies of this dynamic is that parties represent often long forgotten parliamentary cleavages and alliances. Declining and transformed social classes are still the main focal point of political debate and representation in the UK. A crisis of politics is identified when parties fail to collect either members or votes. Since 1945, there has been a well-charted exponential decline in party membership. As a recent House of Commons research paper highlights party membership is at an all time low with less than 1 per cent of the electorate joining parties; this is down from 3 per cent in 1983. Despite this general trend, membership of what are frequently labelled  ‘insurgent’ parties – be they nationalist parties or the UK Independence Party (UKIP) – is rising. In terms of voting, the trends in turnout have long been clear; it is likely that in the 2015 election, the combined vote share of the three main parties will be lower than it ever has ever been in modern political history. 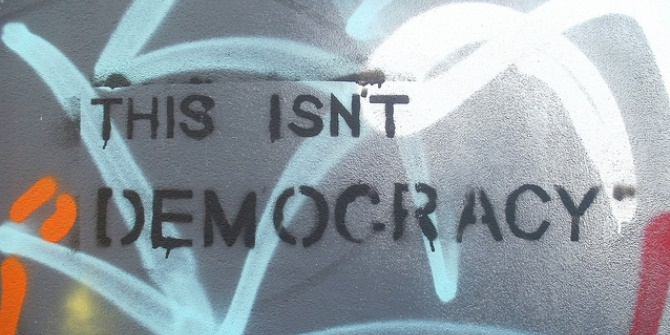 In this context, the current response from within the Westminster village may well, in time, be seen as having misread the popular mood underpinning this whole debate. To illustrate this, let us pick up on two of the more headline grabbing recommendations from the aforementioned PCRC Inquiry – that of state funding to support political parties, and compulsory voting in parliamentary elections. What is the cure offered to the perceived pathologies underpinning public disengagement from traditional Westminster forms of politics, also linked to the ‘live’ issue of a further decline in trust? It is to compel the public to support the existing model of politics through top-down mechanisms including legal enforcement. These remedies may well do more to accentuate the problem they were originally designed to address.

As a mounting body of evidence illustrates, there is a major issue of political disengagement between voters and Westminster’s system of government. It is of course a trend that is by no means unique to the UK as support shifts from traditional, centre-left and centre-right parties to nationalist parties or those more on the fringes of the left and right spectrum. This partly relates to the short-term consequence of what is now nearly six years of economic crisis and declining real wages, but part of it is the result of a long-term dynamic in which the electorate is no longer firmly attached to the traditional political parties, increasingly disillusioned with the nature and actions of the Westminster class.

If we broaden our perspective on this issue further, what is striking is that the current UK government promises further austerity, and that the idea of a social Europe seems to have been abandoned by Westminster’s mainstream – what some might identify as the UKIP ‘ratchet effect’. From this broader perspective, the Westminster political class appears to regard the solution to the current maladies as finding ways to reinforce the existing system, rather than embracing the need to re-think the current nature of politics.

It is clear that many of the recommendations offered by the PCRC Report chime with the wider response to the UK political crisis. The reaction to the recent Scottish Referendum vote has been pressure for English votes for English laws [EVEL], or further devolution of power to City Regions such as Manchester. However, both of these solutions have been shaped, rather grudgingly, by Westminster. Robin Hambelton somewhat caustically, but perceptively refers to this rather ironically as ‘centralisation on steroids’. For what is revealing about the Manchester case triggered by events in Scotland is that a Mayor has now been imposed on the city, the range of powers to be devolved has not yet been discussed with the public, nor has the process been made particularly transparent. Indeed, it does not seem unfair to claim that there has been almost a complete absence of overarching devolution principles to guide the decentralisation process. Why haven’t the powers devolved to Manchester been made available to all? What have been the bottom-up mechanisms that have been employed to help shape this process? It is hard to envisage any democracy in the world where supposedly real powers are devolved, as they have been now in Scotland and Manchester, merely at the whim of politicians. But then the nature of the British political tradition has always been that the source of political power has cascaded down from above, be it originally from the Monarch, but nowadays the executive, rather than from below.

How then might this debate move forward from the iron-cage of a defence of the British political tradition in which it currently appears incarcerated? What we need from political leaders is a serious process of engagement with citizens that is capable of stepping beyond vested party interests. Politicians need to accept a debate about the future of the UK constitution that is not shaped by what will produce the best outcome for them (which is essentially what is happening at the moment, as political parties have positioned themselves to ensure they benefit from any reform).

A wider discussion would focus on processes outside of Westminster, what people really want in terms of how the decisions that affect their lives get taken. It would examine different mechanisms of accountability and new forms of political representation, including those beyond traditional party channels. What is all too apparent is that people are increasingly disinclined to express their political preferences and activities through political parties alone. People are not anti-politics, nor do they take democracy for granted, but they do not currently feel properly represented by political institutions or their representatives. We need to find new ways of enabling individuals to engage outside the existing model, which allows people and communities to shape and take control of their own lives. We need models and processes of democracy shaped by the 21st century, rather than seeking to sustain a British political tradition whose practices and view of politics largely evolved from a 19th century mind-set that is no longer relevant to today’s circumstances.

Note: This article gives the views of the authors, and not the position of the British Politics and Policy blog, nor of the London School of Economics. Please read our comments policy before posting. Featured image credit: Feral78 CC BY 2.0

Dave Richards is Professor of Politics at the University of Manchester.