The Liberal Democrat surge puts us into new territory in forecasting how the 2010 Parliament will look. However, things work out from now on, it seems much less likely that David Cameron can command an overall Commons majority. His best outcome may now be a ‘shallow hung Parliament’, with the Tories as the largest party but no majority for legislation – which might lead to a second general election as early as May 2011.

Instead, the odds have dramatically shortened on a “deeply hung“ Parliament. And here the analysis is not as simple as you might think. A great deal depends on two key thresholds:

Brown’s case is made stronger here by the fact that Labour has done a lot of preparation for a coalition and has a lot to offer the Liberal Democrats, whereas David Cameron has done nothing to prepare for a hung Parliament. But if the Tories have most MPs, this puts Nick Clegg in a difficult situation, especially since the Tories will almost certainly have more votes in the electorate than Labour.

Suppose the Liberal Democrats get 77 MPs

To see how these possibilities work out, I consider a pretty conservative estimate of the consequences of the current polls, which assumes that the Liberal Democrat surge dies away a good deal by polling day (perhaps getting 25-27 per cent support in the final vote) but that they still do well enough to get another 15 MPs.

The pie chart below shows what this means for the two main parties. There are 650 MPs in total, but 18 of these are for Northern Ireland (a completely different party system) and I assume that 15 will be won by the Nationalist parties in Scotland and Wales and a scattering of independents. With 77 Liberal Democrats that means that the combined 3rd, 4th, 5th and smaller parties would have 110 MPs between them. 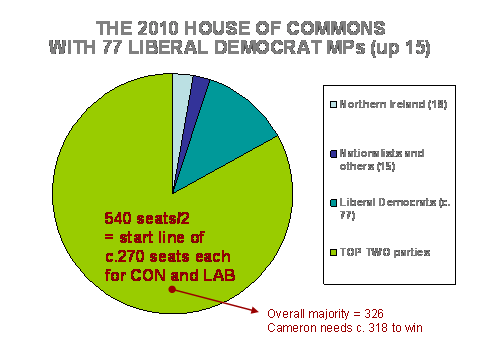 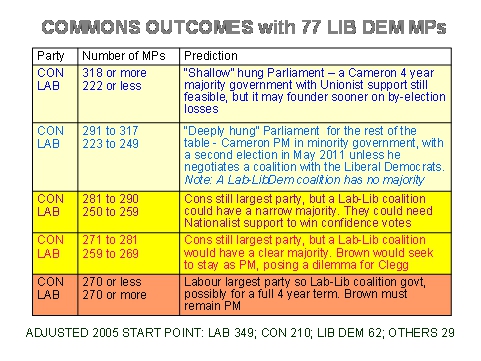 Once Tory MPs drop below 281 seats then a Lab-LibDem coalition could begin to govern with a majority, and once Labour reaches 260 MPs such a government would be able to survive confidence votes. When Labour gets to 270 MPs (highly likely on this scenario) then Gordon Brown would have an unchallenged right to stay in Downing Street and to either form a coalition government with the Liberal Democrats (which could have a full four year term) or soldier on as a minority government (which would be very difficult indeed)

Now suppose the Liberal Democrats do brilliantly and get 93 MPs

If the Liberal Democrat surge does not die away but continues on at full force until polling day, they will still find it surprisingly hard to win MPs – because the electoral geography works against their relatively even spread of support across the country.

Suppose however that Clegg’s wave can somehow break this problem – which might happen, since many bets are now off. A realistic top ambition would then be for the Liberal Democrats to get 93 MPs – improving their current tally of 63 MPs by winning another 30 new constituencies.  Again the pie chart below shows that this would further reduce the number of MPs that the Conservatives and Labour could share between them – to just 524 seats. 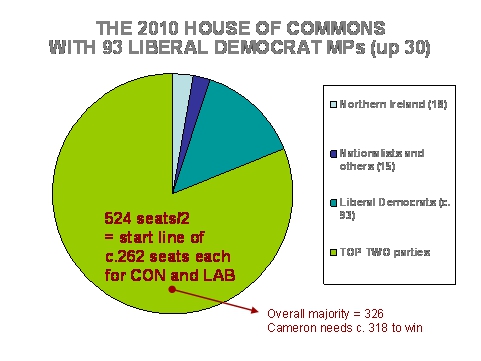 The Table below now shows that only “deeply hung” Parliament scenarios are now foreseeable. In theory Cameron could still lead a minority government, but the Conservatives would need to gain more than 90 seats from Labour to do so – a very hard to achieve objective with Liberal Democrat support riding high, unless the Labour vote should collapse in some way not seen so far. Even for Cameron to be clearly the largest party might be difficult, because Labour should still win many more MPs per million votes than the Tories will. 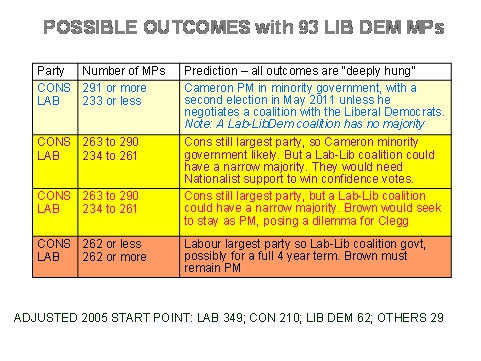 If Labour can stem its losses to less than 87, Gordon Brown would lead the largest party in this House of Commons and would need to negotiate a coalition with the newly numerous Liberal Democrats, and would have a strong incentive to do so in order to avoid the risks and perils of a minority government. In which case the many commentators who have written him off and pronounced the death of ‘new Labour’ may suddenly need to revise their views, and constitutional reform in the UK would be back on the agenda with a bang.