With the price of oil dropping dramatically over the last several months, many are asking what this means for the renewable energy sector. Jennifer Baka finds that the potential for growth in wind and solar is strong and unlikely to be impacted by recent oil price declines. Declining oil prices can, however, impact the transportation sector, specifically the markets for biofuels and hybrid vehicles.

International crude oil prices declined by over 40 per cent in the last half of 2014 reaching the lowest prices since economic recovery began in June 2009 (Figure 1). How might these declines impact the renewable energy sector and how should policymakers respond? 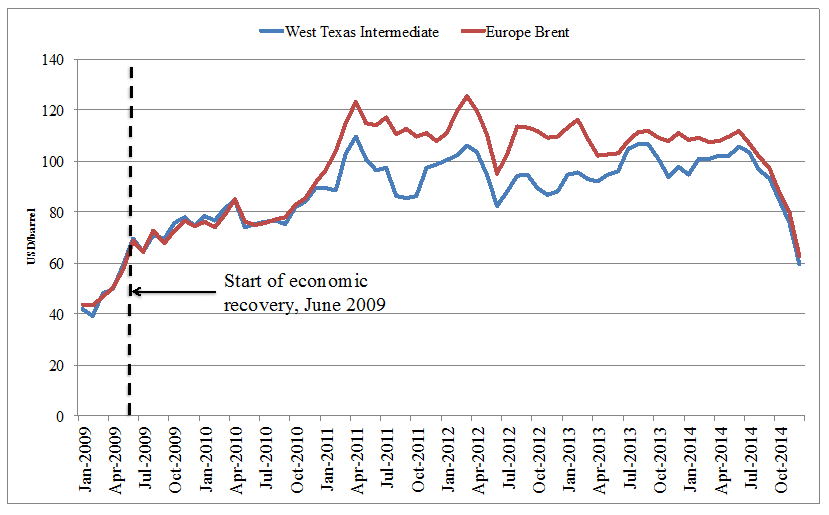 According to the Intergovernmental Panel on Climate Change’s (IPCC) latest analysis, the LCOE of wind and solar – excluding government subsidies – are currently competitive with the LCOE of coal and gas power plants. Additionally, installed capacity in wind and solar has steadily increased with both sectors currently accounting for nearly 9 per cent of electricity generation. If current policies to promote renewable energy remain in place, the IEA estimates electricity generation from wind and solar could reach over 20 per cent by 2020. Thus, the potential for growth in wind and solar is strong and unlikely to be impacted by recent oil price declines.

Declining oil prices can impact the transportation sector, specifically the markets for biofuels and hybrid vehicles. Global production of ethanol and biodiesel has steadily increased over the last decade (Figure 2). 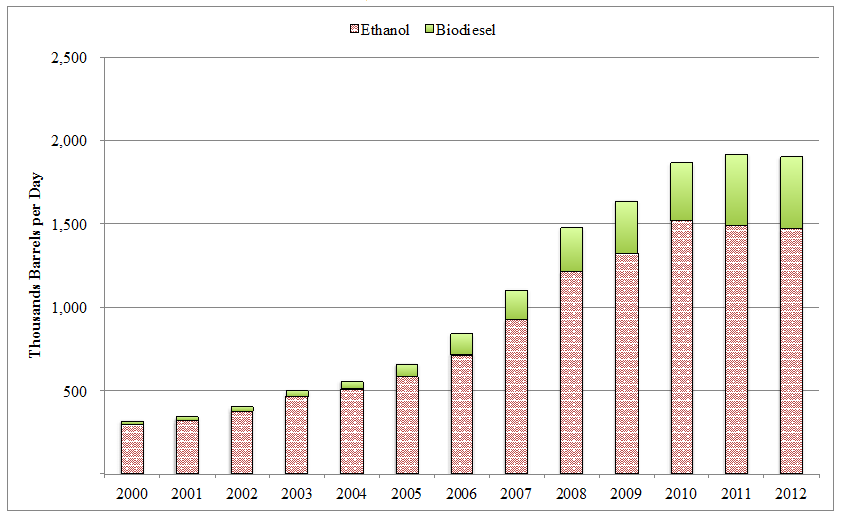 Despite numerous efforts to stimulate the industry, including government blending targets and production subsidies, biofuels account for just under 3 per cent of transportation fuels globally (on an energy equivalent basis). Various technological and political factors contribute to this low market share. First, the US, currently the world’s largest ethanol producer (and largest consumer of gasoline), is steadily approaching the so-called ‘blending wall’, the maximum amount of ethanol that can safely be blended with gasoline for use in internal combustion vehicles. Technological modifications are required for a vehicle’s fuel system to handle ethanol blends above this limit, currently set at 10 per cent. Low oil prices typically discourage consumers from investing in such modifications or purchasing alternative technology vehicles.

Preliminary evidence indicates that low oil prices are impacting sales of more energy efficient vehicles, such as hybrid electric vehicles (HEVs) and electric vehicles (EVs). December 2014 sales of HEVs in the US were down 7.9 per cent compared to December 2013 while sales of more fuel intensive sport utility vehicles (SUVs) increased by 17 per cent. As a result, the sales-weighted fuel efficiency of the US vehicle fleet stagnated in the final months of 2014 after years of steady increases.

Regarding political factors influencing biofuels, numerous researchers have questioned the land use change and social impacts of biofuel production, particularly in developing countries. In my own work on Jatropha biodiesel production in India, I found that Jatropha directly competes with an existing woodfuel economy for land. Replacing the existing woodfuel economy with Jatropha may actually reduce the country’s energy security, particularly in rural communities. Further, competition for land has facilitated questionable land acquisitions that have displaced rural agriculturalists. A better understanding of how biofuels impact the livelihoods of rural communities – accompanied by appropriate legal protections – is needed before biofuels can make a more sizeable contribution to a more sustainable energy future.

A key question is how long oil prices will decline and how we should respond. Figure 1 highlights the volatility of oil markets in recent years, a factor that should motivate policymakers and consumers to respond cautiously. Further, because the energy sector is currently the single largest emitter of greenhouse gases accounting for roughly 35 per cent of global emissions (IPCC), continued commitment to renewable energy and energy efficiency policies are needed to address climate change.

Significant strides have been made in recent years highlighting the need for a more diversified, inclusive and sustainable energy system. For example, the UN’s Sustainable Energy for All campaign seeks to provide universal access to electricity, double global energy efficiency rates and double the share of renewable energy in the global energy mix by 2024. This campaign has tremendous potential to improve the livelihoods of the 1.3 billion people currently living without access to electricity and the 2.6 billion people living without access to clean cooking facilities. Additionally, the International Renewable Energy Agency (IRENA) was established in 2011 to help promote renewable energy and to diffuse technologies throughout the world. We should not lose sight of these achievements at the pump, especially not on the road to the UN Climate Change Conference in Paris, December 2015.

Note: This article gives the views of the author, and not the position of the British Politics and Policy blog, nor of the London School of Economics. Please read our comments policy before posting. Featured image credit: Berardo62 CC BY-SA 2.0

Jennifer Baka is an Assistant Professor in LSE’s Department of Geography and Environment.