Americans go to the polls today to decide who will be their next President. John Van Reenen analyses the causes of what should be a central topic in the debate; growing inequality. Rather than talking about the underlying causes of increased inequality, and debating how to tackle it, the presidential candidates have focused on dealing with its consequences, particularly over taxes and welfare.

Inequality doesn’t usually feature in US presidential election debates. Compared with Europeans, Americans are more relaxed about disparities of income, seeing high pay as the reward for effort and ability. What matters, they typically say, is equality of opportunity not equality of outcomes.

This time is different. The Occupy movement reflected the general anger towards Wall Street bankers who raked in millions during the boom years and then got bailed out in the bust that they helped to create. One of the main differences between the two candidates in this election is whether or not to raise taxes on the rich.

These differences are caused by what happened in the labor market (Figure 2). In 1970, the richest tenth of men earned about 3.2 times as much as the poorest tenth; by 2010, this ratio had risen to 5.2. 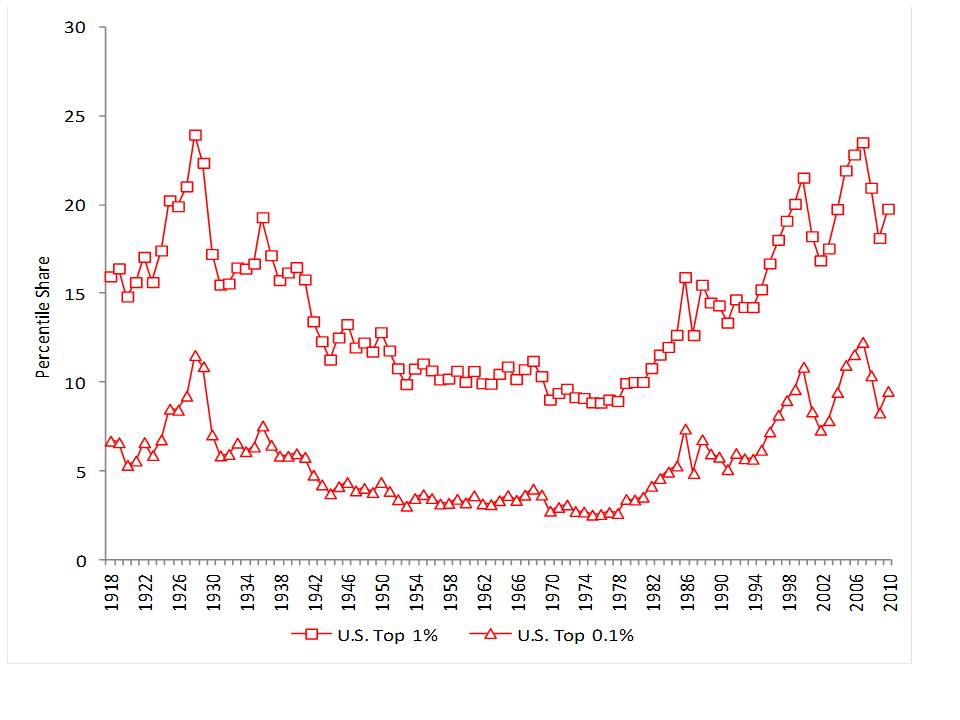 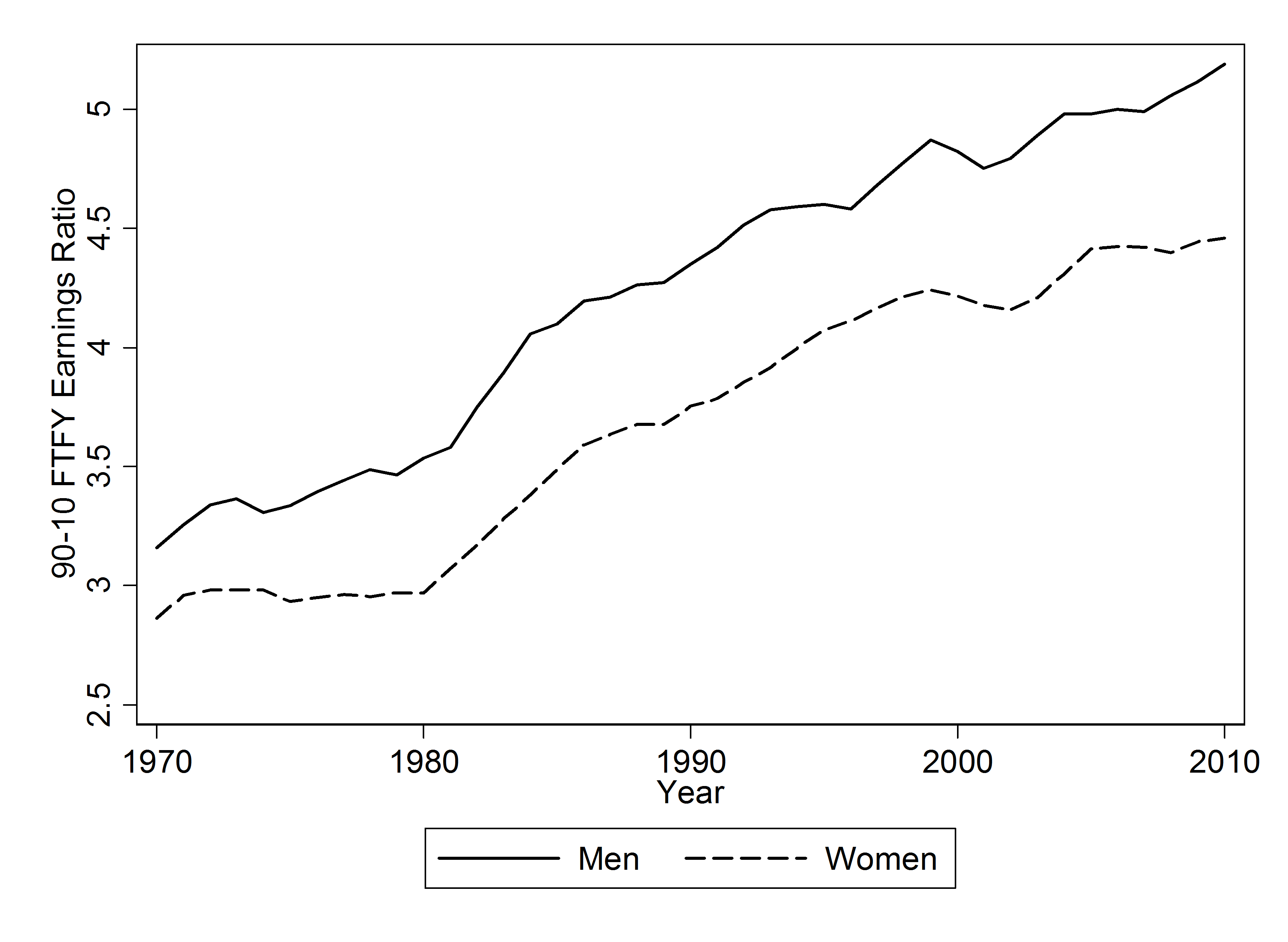 Rising inequality between workers and businesses

The US economy has not done badly over the last four decades. Productivity as measured by real GDP per hour grew by 84% between 1972 and 2010 (Figure 3). Labour compensation, the second line from the top, tracks productivity for most of this period, but since the early 2000s it has fallen behind. This means that company profits are an increasing share of the income pie.

More stunning is the fact that median wages rose by a measly 20% since 1972, way less than average compensation, which grew by 71%. There are two main reasons for the wedge. First, the upward march of wage inequality means that average wages have increased much faster than median wages. Second, non-wage parts of compensation, especially healthcare costs, have dramatically risen. 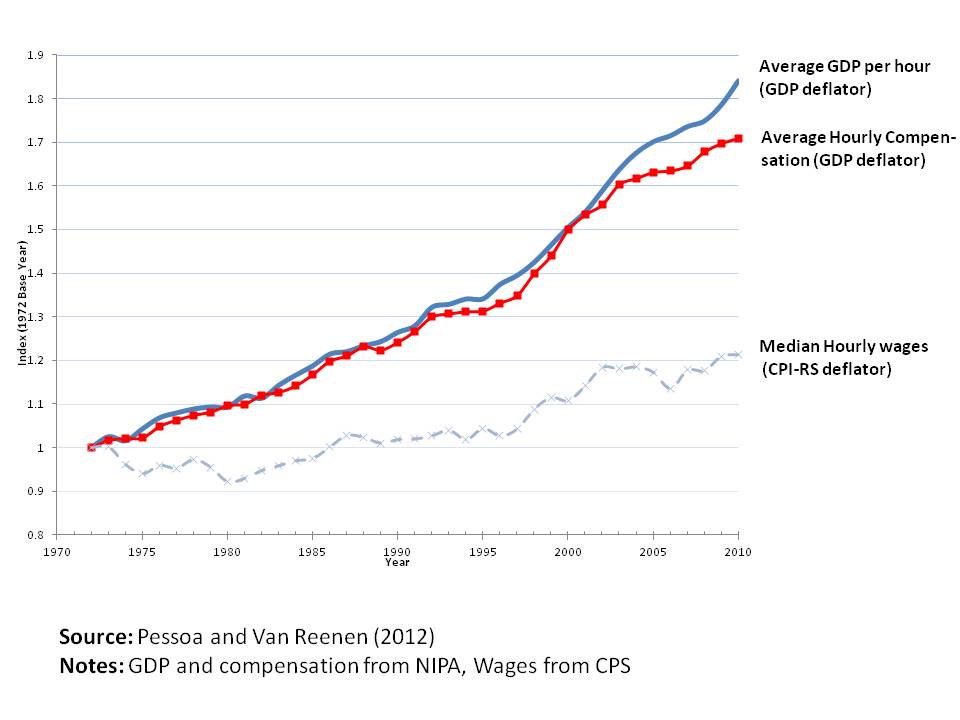 The stagnation of median wages resonates with the ‘polarisation’ debate where the middle classes feel squeezed by both the top and the bottom. Workers in the middle of the pay-scale have fallen behind those in the top 10% for over 40 years, but in the last 15 years they have also lost ground to those below them in the bottom 20%. Since it’s usually the middle that decides elections, no wonder politicians are nervous.

Social mobility in the US

But what about the ‘American Dream’? Although the US has more inequality than other rich countries, isn’t it easier for the children of the poor to become wealthy through hard work?

Surprisingly, the effect of being born rich on future life chances is stronger in the US than in almost every other rich country. The correlation of a son’s earnings with his father’s earnings at the same age is really high.

Some of this lower intergenerational mobility is because poor American kids really struggle to get a good quality education. It could also reflect high inequality of overall earnings. If the rungs of the income ladder are very far apart as they are in the US, then it is much harder to climb to the top. The ‘Great Gatsby’ curve in Figure 4 chimes with this idea, showing that countries with higher inequality tend to have lower mobility.

Figure 4: Countries with more inequality seem to have lower earnings mobility between generations

What are the causes of rising inequality?

Among economists, the consensus is that technological change is the main culprit for these inequality trends by massively increasing the demand for skills. The growth of US average years of schooling has slowed for entrants to the labour market since the late 1970s. With not enough people with skills coming out of schools, the premium for education rose and inequality took off.

Trade with low wage countries like China could also make life tougher for the less skilled workers. But inequality started to climb long before China and India joined the global economy, making it a less likely explanation.

The forces of technology and globalisation may also have created a ‘winner takes all’ society, where the prize for being a superstar in sports or business is huge. But another story is that bad regulation has allowed plutocrats to cream off profits in industries like finance, exploiting the government’s bailout guarantee.

What are the candidates’ policies?

Rather than talking about the underlying causes of increased inequality, the presidential candidates have focused on dealing with its consequences, particularly over taxes and welfare.

President Obama has pledged to keep all the 2001 Bush tax cuts except for those households with income over $250,000 a year and restricting tax loopholes for millionaires. For example, the top rate of income tax for the rich will increase from 35% to 39.6%.

One criticism of this tax reform is that it only affects about 1.5% of US households and therefore does little directly about inequality across the great majority of Americans. Another criticism, focused on by Governor Romney, is that these tax increases will mean lower incentives for entrepreneurs and wealthier individuals to work hard and will therefore be a drag on growth.

Clearly, Soviet-style levels of equality would stifle incentives, but the US is a long way from that. Indeed, some argue that high inequality in the US squanders the potential of poor but talented children, as in the Great Gatsby curve. Empirically, there is no robust relationship between inequality and growth in OECD countries. But it is plausible that extremes of both equality and inequality will damage growth – and the US seems to be moving into extreme inequality territory.

Income inequality has been rising in the US for almost four decades. President Obama plans to increase taxes on those with high incomes and Governor Romney is against such ‘class warfare’.

Both candidates want to impose tougher restrictions on imports from China. Governor Romney has vowed to label China a ‘currency manipulator’ and President Obama has been increasing trade sanctions. China-bashing will only damage growth and is ineffective in tackling inequality. A better focus would be on restoring America’s place as a world leader in public education and thereby tackling the human capital deficit that is at the heart of the inequality challenge.

This is the fourth in the CEP’s US Election Analysis series.