The study of foreign policy has always contained a healthy focus on how cognition and psychology impact on the beliefs of foreign policy actors. Here, Oliver Daddow explains how published data by and about those actors can be used to interpret the beliefs that underpin decisions taken on behalf of the state by leaders and elites.

Foreign policy is difficult to define succinctly. It can be considered the sum total of external activity undertaken by a state, usually by a government supported by an accompanying bureaucratic machinery. How do we interpret what foreign policy elites are trying to do when direct access to those elites is minimal? Interpretation is slightly less of an issue for historians because of the volume of archival records available. But how can political scientists explore contemporary decision-making?

The outlooks and personality types of individual leaders, group decision-making dynamics, and the ways in which factors such as perception and misperception influence decision-making have all been treated at some length. At the heart of this work is often an interest in explaining how the beliefs of leaders – their ‘fundamental assumptions about the world’ -affect their foreign policy choices. For example, does the leader believe conflict is an inevitable feature of international life? What are the basic interests of the nation as seen through the eyes of the leader: sovereignty, security, economic or influence? How are these interests inter-related and best secured through foreign policy activity? How much control over events does the leader believe he or she can exert? Put differently, how do leaders construct the world around them, and their own agency within it, and what does this mean for their foreign policy practices?

Some writers have been directly involved in the decision-making process itself in an advisory or other capacity. For those less fortunate – academic ‘outsiders’ – the study of foreign policy beliefs has to take place at one remove from what remains a relatively closed process of foreign policy decision-making. As a result, interpreting individual or collective cognitive constructions poses a series of epistemological and methodological challenges.

Yet the beliefs of foreign policy actors can be accessed, even at one remove. More often than not this is via the interpretation of published data by and about those actors, rather than via first hand or ethnographic observation, which has often been a strong component of the interpretive method. This is because a form of agent-centred qualitative public policy discourse analysis permits us to identify the textual markers that indicate core elements of the worldview of foreign policy decision-makers. The emphasis is on foreign policy narratives and the links that can be made between those narratives and government foreign policy outputs.

The positive news is that national elites leave traces of what they do on which to build inferences. These ‘marks’, as it were, are physical and visual (the conduct and outcomes of military interventions for example), as well as textual, including legislation (policy documents), deliberation (parliamentary debates and appearances in front of parliamentary committees) and justification (policy speeches, tweets, newspaper articles and autobiographies/memoirs). The latter can often become post-hoc rationalisations of messier decision-making from the time, although they are no less useful for that caveat. Clearly, however, each mark of foreign policy activity comes with its own value for the researcher, depending on the questions being asked.

Constructivist accounts have usefully put the view that foreign policy practices tend to be the product of three issues. First, they rely on an implicit or sometimes explicit judgment about the kind of national identity elites want to express through foreign policy activity. Second, elites possess assumptions about the character of the international environment in which they operate. Again, these are sometimes acknowledged, but more often than not remain unspoken assumptions. Third, elites tend to merge values and interests in foreign policy decisions, often in complex ways.

In finding reference points from past experience (personal to the leader or from the broader organisational or collective memory) leaders draw on traditions of thought about their nation’s role in the world. It is through a conscious engagement with, and adaptation of, these past traditions, that foreign policy trajectories emerge, evolve and develop (for more on this see here). The crux is that methods such as discourse analysis can tap directly into the identity-policy nexus that lies at the heart of a constructivist-interpretivist appreciation of foreign policy decision-making. In this regard, discourse and other data about elite beliefs are treated as analytical prisms through which we see identity questions unpacked and different sources of material power and influence being weighed up and acted upon to produce foreign policy decisions. In a discourse account the agents are central to the analysis, with the agents’ views on the relative importance of different inputs and influences on policy being the guide to what features in the final analysis.

The method of analysing foreign policy beliefs used in my research into British foreign policy activity works from the idea that where we see linguistic or soundbite repetitions used to describe and justify foreign policy decisions, then something important is going on (for relevant work see here). It assumes that when a politician repeats a central idea in various places to different audiences, then he or she is setting out to persuade those interlocutors of the rectitude of the politician’s position. It further assumes that politicians do not use language – all the time – as a smokescreen to hide or obscure their ‘real’ intentions.

Linguistic repetitions, such as the idea that Britain must ‘lead’ in Europe, be a ‘special’ ally of the US, a ‘force for good’ in the world, or that Britain is an ‘island’ nation, indicate the nature of the ideational backdrop against which contemporary policy problems are thought about and acted upon. Coding for these keywords or phrases, and then interpreting them in context, enables the researcher to study the linguistic markers of foreign policy thought. Given that national foreign policies are rarely subject to radical or sudden upheavals as are alterations in domestic policies, the discourse method can deal very effectively with continuity, change, and incremental steps in between.

Note: this article represents the views of the author and not those of the British Politics and Policy blog nor of the LSE. Please read our comments policy before posting. 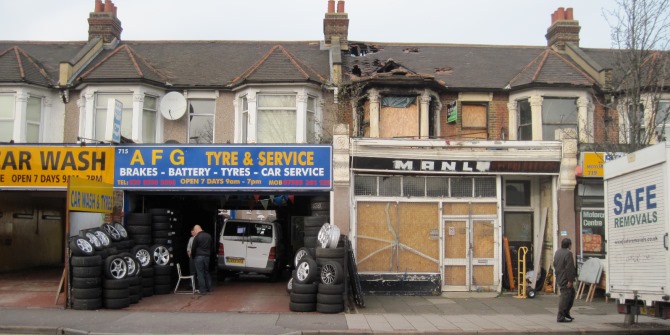