The Labour Party once had a clear ideological identity but it is now far harder to locate its vision of society within political debate. Over time both the language of ideology and its persuasive importance have diminished as the party has become reliant on alternative means of gaining appeal. Katharine Dommett argues that the rhetorical move away from ideology towards more abstract values and personal attributes has affected the way in which the public view the Party.

What would Labour do if they get elected in 2015? Ask this question and you will likely be greeted by an array of shrugs, equivocations or partial explanations which cite a tax on bankers bonuses, house building and an energy price freeze. With just over a year to go it appears that few voters have a clear idea of what the party stands for, but why is this?

Academic analysis and political commentary has tended to pinpoint a convergence between the main political parties. This explanation rings true for many people as key political announcements, such as George Osborne’s recent decision to impose a welfare cap, provoke not fiery political rows, but placid agreement. Hence, Ed Balls responded to Osborne’s benefits policy by asserting:

Clearly, we will do things differently from the Government. For example we have said we will abolish the bedroom tax. We’ve shown how we will pay for that. We actually think our measures on housing and on young people and jobs can get the wider bill down. We’ll do things in a fairer way, but the idea of a welfare cap was proposed by Ed Miliband and we’ll support it next Wednesday.

In such a landscape political difference is hard to discern. In accounting for why Labour is struggling to define a clear identity in the public mind it is interesting to look beyond policy to the realm of ideology. Whilst parties once had clear ideological identities it is now far harder to locate conflicting visions of society within political debate. Labour politicians in particular seem to have become almost allergic to ideology, rarely using the term except to condemn opponents as doctrinaire or dogmatic.

This approach to ideology from Labour is relatively new. Whilst the Conservatives have long eschewed the term, in the post-war period Labour embraced ideology and cultivated an ideological identity allied with the principles of socialism. Building on a foundation of class strife and trade union activism Labour leaders gave impassioned political speeches laden with ideological references that gave a clear image of what the party stood for.

In Clement Attlee’s speeches, for example, it is possible to find an array of positive references to ideology. He stated that ‘in every sphere of Government you have seen our Socialist impulse, our Socialist outlook’ (1947) and asserted ‘our Socialist principle of placing the welfare of the nation before that of any section and of dealing with any problem in a practical and businesslike way’ (1946). The language of ideology therefore offered a picture of what the party stood for, but it was also crucial to the way the party persuaded the public to vote for the party. Labour leaders from Attlee onwards made rhetorical links between Labour’s ideological identity and the party’s credibility and competence, seeing ideology as central to retaining or gaining office.

Over time the relationship between the Labour Party and ideology has altered. Both the language of ideology and its persuasive importance have diminished as the party has become reliant on alternative means of gaining appeal. Within the Labour Party a dramatic shift in approach can be seen under the leadership of Tony Blair.

Whilst Blair by no means rejected ideology he sought to re-present the party’s ideology as founded on ‘a tradition far above ideology but not beyond ideas’ (1996) and emphasised ‘a belief in society, working together, solidarity, cooperation, partnership’, ‘not the socialism of Marx or state control’ (1994). Labour’s identity was therefore tied to Blair’s personal beliefs and values, creating a more abstract message which emphasised the values Labour shared with the public, and Blair’s personal credibility as a leader. This approach altered the way in which Labour’s identity was defined, moving away from an overarching narrative to emphasise transient and personality centred attributes.

Under the leadership of Ed Miliband this approach has continued as Labour elites reject the language of ideology and attempt to cultivate appeal by emphasising shared values and the party leaders’ personal background and perspective. Miliband’s speeches therefore attempt to create personal bonds with the audience in assertions such as: ‘I’m not with the Prime Minister. I will never write off whole parts of our country by calling them sick. We are not a country of bad people but great people. Great people in a great country’ (2011). The Labour leader has had some success using this approach as his ‘cost of living crisis’ narrative has resonated with the public and led to support for the party’s agenda on energy prices. However, in many other areas Labour lacks a convincing policy narrative and the overarching vision offered historically by ideological statements is not present to fill these gaps.

Viewed from this perspective Labour’s current problems stem not simply from a lack of policy announcements, but from a more general uncertainly around the party’s identity and the kind of society Labour would seek to create. This is not to argue that Labour lacks an ideology, indeed many of the ideals evident post-war remain intact, but it indicates that the rhetorical move away from ideology towards more abstract values and personal attributes has affected the way in which the public view the Party.

On this basis it appears that rather than focusing on policy announcements and Miliband’s personal poll ratings the Party should reconsider its relationship with ideology, recognising that principles, vision and integrity can be as, if not more, important than policy when seeking to cultivate an appealing party persona.

Note:  This article was originally published on the PSA’s Insight blog and gives the views of the author, and not the position of the British Politics and Policy blog, nor of the London School of Economics. Please read our comments policy before posting. Image: Ed Miliband CC BY 2.0

Katharine Dommett is a research fellow at the University of Sheffield. Her research interests focus primarily upon the intersection between ideas, institutions and actors. These themes have inspired an interest in ideology, political parties, political rhetoric, political communication, parliament and governance. 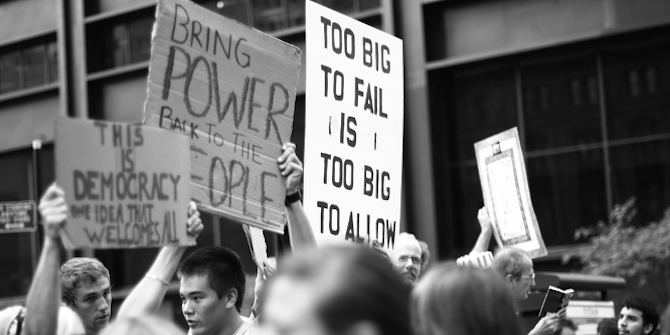