Contrary to what is often believed, people hold sophisticated interpretations and understandings of socio-economic inequality, writes Sarah Irwin. She draws on her own research to explain participants’ reactions to social structure, as well as to suggest that social science can do more to effectively understand lay perceptions of inequality.

How do people perceive social inequalities and see their own position within wider society? In recent research and commentary it is often held that, as individualists, people fail to see the social processes which shape their circumstances and life chances. They see hard work and ambition as keys to success and believe themselves and others to be authors of their own lives and fortunes. Social influences are not invisible but they are in the periphery of people’s vision, ever more so it seems in a ‘post-class society’. However, I argue that whilst they are individualists, people are sharper interpreters of socio-economic inequalities than they are often held to be.

In a recent article I show that people hold sophisticated understandings of the social shaping of opportunity and constraint for themselves and for others. In current times of anxiety about how some ‘left behind’ groups are finding voice there is an urgent need to tap into widely held inclusionary instincts.

In a project looking at parents’ values and experiences, run from 2008 to 2014, I explored participants’ experiences and perceptions of social class, the kinds of comparisons they make in describing how they are getting on, and their perspectives on social structure and inequalities. In the latter analysis I started with a question from the International Social Survey Programme, also asked in the 2009 British Social Attitudes Survey (see Figure 1). When asked ‘what type of society is Britain today?’ and ‘what do you think Britain ought to be like?’ people typically see society as being extensively unequal (40 per cent choose type B as a description) and commonly desire it to be more equal (with 58 per cent opting for ‘type D’ as a preferred distribution; see here).

These five diagrams show different types of society. Please read the descriptions and look at the diagrams below. What type of society is Britain today – which diagram comes closest?; What do you think Britain ought to be like – which would you prefer? 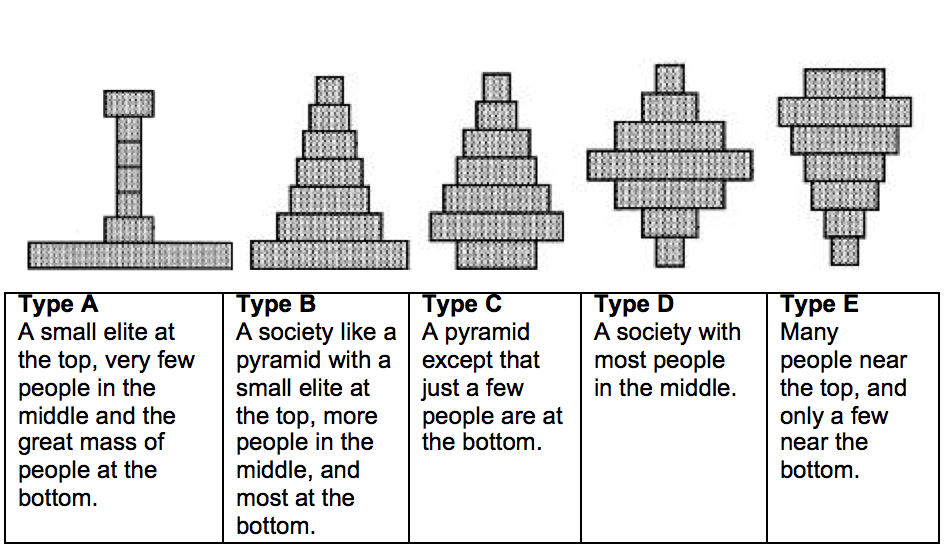 My participants echoed these wider patterns, and talked with concern and sometimes anxiety about inequality. Most participants saw the social structure as very unequal and judged it negatively. They spoke about the uneven distribution of opportunities and life chances, injustice, polarisation, social exclusion, an elite with too much power, and the entrenchment of disadvantage. Middle and working class participants criticised what they saw as a narrowing of opportunities, in particular the loss of meaningful chances for disadvantaged groups to get on. Many participants criticised the moral injustice of extensive material inequalities and were troubled by growing exclusion in contemporary society. Some working class participants expressed frustration at the stagnation of wages over the past decade and longer.

I asked people where they saw themselves within the picture of social structure they had identified. This kind of question has been used in quantitative research which has shown a tendency for people to assign themselves a more middling position than might be expected. Researchers point out that people interact mostly with others in a similar position in society and therefore misapprehend massive inequalities of wealth and power. Again, it appears that social processes are pushed into peripheral vision. However, such summary measures of a middling self-placement miss the richly complex and multi-dimensional understandings which people convey in their accounts of inequality and social structure. What was especially revealing in the study was asking participants about if and how things had changed over their lifetimes.

When participants spoke about continuities and changes they offered detailed accounts of social structural patterns and change and strongly articulated their own experiences and biographies within the wider social context. For example, some who felt they had been successfully upwardly mobile recounted their own determination and drive, but they also saw themselves to be part of a group which had done better than others left behind. They linked their own biographical pathways to a set of historically specific education and work opportunities they believed had become closed off to younger generations.

Some provided nuanced accounts of links between personal fortunes and upsets and wider structures of opportunity and constraint as these had changed through their lifetimes. They described adulthood experiences of family building, housing pathways, employment, unemployment and changing economic fortunes, and trajectories of upward and downward mobility. There were participants in manual jobs who felt that their own lifetime position had remained constant or become more difficult due to the declining value of their wages. They described how opportunities for progression had been undermined and felt no better off than they had been several years previously. Biographical stories were told against a backdrop of wider changes, but so too descriptions of the social configuration of opportunity and constraint were woven through accounts of personal fortunes and misfortunes.

Throughout their accounts, participants were giving ‘a view from a place’. I am not suggesting that they provided an objective account of inequalities or social change. However, whilst they gave situated accounts they also provided detailed narratives of how social contexts shape opportunity and constraint for themselves and others. In this respect, people are rather good sociologists.

Social science can do more, I suggest, to effectively grasp and understand lay perceptions. There are extensive commonalities across people in very diverse circumstances and they spoke with concern about issues relating to how, as a society, we marry up individual well-being and collective responsibilities. In addressing the same question there is an important opportunity – and pressing need – to build progressive and inclusive alliances around renewed visions of public good. Sophistication in lay understanding of structured inequalities requires, indeed demands, more reasoned public debate about how we redress widening inequalities and social marginalisation.

Note: this article draws on the author’s published work in Sociology. The original can be found here and an open access version is available here.

Sarah Irwin is Professor of Sociology at the University of Leeds, and Director of the Centre for Research on Families, the Life Course and Generations (FLaG). 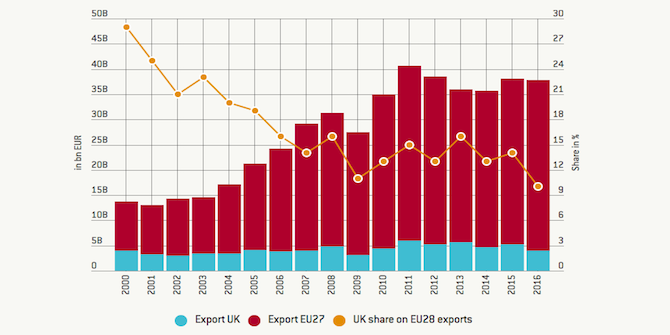