In our recent book, The Rise and Fall of Social Cohesion, we argue that the US and the UK are caught in a vicious circle: the combination of higher levels of poverty and a targeted welfare system produces a large amount of negative stories about the poor and welfare recipients. In contrast, Sweden and Denmark seem to be caught in a virtuous circle. There, the combination of lower poverty levels and a universal welfare system reduces the amount of newsworthy negative stories and creates room for positive narratives about the ‘deserving poor’.

The Study of Newspapers

In order to substantiate this argument, we studied a sample of 1,750 British, 1,750 Danish and 1,750 Swedish newspapers. We covered five major newspapers published between 2004 and 2009. From a number of American studies, we already know that media in the US tend to present poor welfare recipients in a very stereotypical way. The ‘black man of the ghetto’ or the ‘welfare queen’ are two of these well-established stereotypes. However, it is hard to tell from such studies whether this media portrayal is caused by negative racial stereotypes, or by perceptions of antisocial behaviour.

In the book, we argue that negative stereotypes are not just a matter of race. The UK proves to be an interesting case in this respect, as the poor are predominantly described as a ‘white phenomenon’. Looking at the pictures newspapers attached to their stories about ‘the poor’ and welfare recipients, we calculated the numbers of white and non-white people presented, finding that UK stereotypes tend to be very similar to those seen in the US. Research in Sweden and Denmark, however, shows that in societies with moderate levels of poverty and inequality those at ‘the bottom of society’ are presented in a very different light.

Categorising media content is a tricky and cumbersome exercise. In the book, we label stories focusing on the poor and welfare recipients as either ‘negative’, ‘positive’ or ‘other’. As expected, we found fewer positive stories about the poor and welfare recipients in the British newspaper sample than in the Swedish and Danish samples. The overall findings were that 41 per cent of stories in our British sample depict ‘the poor’ in a positive light, whereas in Sweden and Denmark the share was 62 and 55 per cent, respectively. What keeps the British press somewhat positive is the publication of stories related to old-age poverty and anti-poverty policies aimed at easing living conditions for those at the bottom of society. Yet, we know that in the media it is the negative stories that have the potential to create what sociologists call a ‘moral panic’. The Chart below illustrates these results.

Chart: Share of ‘positive’, ‘negative’ and ‘other’ stories about the poor and welfare recipients in five major British, Swedish and Danish newspapers (2004 – 2009) 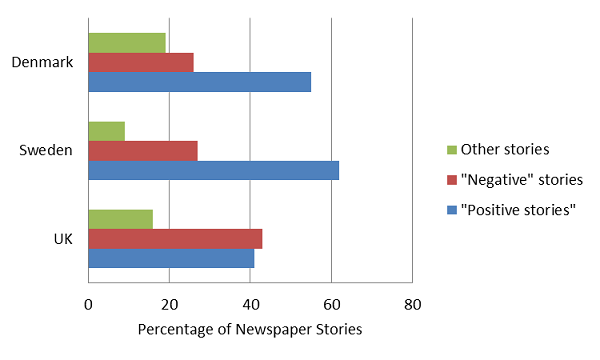 Note: Full calculations are available in the author’s book.

The most negative topic on poverty was by far the abuse of benefits and services. Although this abuse can take various forms, a frequent story in the British media focuses on the issue of benefit fraud. We find these stories are often based on preliminary charges or court convictions of people that have falsely claimed welfare benefits. In our UK sample, 10 per cent of all stories had a benefit fraud theme. In the Swedish sample we only found one such story, while in the Danish sample there was no story focusing on benefit fraud.

Another frequent narrative found in the British press is that of single mothers who abuse the welfare system. This abuse is not considered illegal, however the stories clearly present these single mothers supported by the welfare state in a negative light. Overall, stories concerning the abuse of benefits made up 19 per cent of the British articles in the sample. In contrast, such stories of abuse only made up 2 per cent of the Danish stories and only 1 per cent of the Swedish stories. When combined with a number of other negative storylines, 43 per cent of the British stories were negative, compared to 27 per cent in Sweden and 26 per cent in Denmark. What keeps the Swedish and Danish newspaper samples somewhat negative in tone are stories and pictures of immigrants living in deprived areas.

It is a fact that negative stories are more sensational than positive ones. Therefore, we expected to find that the tabloid press across all countries publishes more negative than positive stories. This turned out to be the case in the UK, where 56 per cent of poverty related stories in the tabloid press were negative. In contrast, in the British broadsheet press, 39 per cent of all stories had a negative focus, 41 per cent had a positive main topic, and 20 per cent were classified as ‘others’.

The difficult origin of stereotypes

In our opinion, the presence of harsh media content in the UK and its absence in Sweden and Denmark indicates that differences in the level of poverty and the reach of welfare systems influence the amount of negative newsworthy stories about the poor. This is not to claim that ethnic divides are of no importance. In our data, we find that the American tendency to depict non-white races in negative stories and whites in positive stories is present in the UK, as well as in Sweden and Denmark. One should acknowledge that the exact origin of stereotypes is difficult to trace. They are produced and reproduced in a complex system of interactions between mass culture, mass media and politics. However, there is little doubt that these stereotypes, once established, are highly significant in shaping public opinion and are therefore also highly important for policy makers in their bid for re-election.

For a longer discussion of the topic covered in this article, see the author’s book, The Rise and Fall of Social Cohesion: The Construction and De- construction of Social Trust in the US, UK, Sweden and Denmark’ (Oxford University Press, 2013).

Christian Albrekt Larsen – Centre for Comparative Welfare Studies, Aalborg University
Christian Albrekt Larsen is a Professor at Aalborg University’s Centre for Comparative Welfare Studies in Denmark. In 2006, he published ‘The institutional logic of welfare attitudes’ based on his PhD thesis. His latest book is ‘The Rise and Fall of Social Cohesion: The Construction and De- construction of Social Trust in the US, UK, Sweden and Denmark’ (Oxford University Press, 2013).