New research shows that homelessness in England is far worse than previously thought. Lígia Teixeira presents findings from new research into the growing problem, which the findings suggest is the result of the combined impact of welfare reform and sharply rising rents. This tide of rising homelessness will not turn until the welfare safety net, including access to genuinely affordable housing, starts to be restored.

This is a concerning time for homelessness in England. New research published by Crisis and the Joseph Rowntree Foundation reveals that the problem is far worse than previously thought. The findings are from state-of-the nation series The Homelessness Monitor: England – an annual independent study analysing the impact of economic and policy developments on homelessness.

When you look at what is driving homelessness upwards, it is clear only political will can turn the rising tide of homelessness. A key prediction in the first report has now come to pass: the Localism Act and welfare reforms are undermining the UK’s national ‘housing settlement’, which has until now softened the impact of poverty on homelessness: housing benefit; a relatively large social housing sector; and the statutory homelessness safety net.

The result? The highest levels of homelessness in years. In the past four years, the number of people seen sleeping rough on London’s streets has risen by 64 per cent to 6,500 in 2013/14. Nor is the trend confined to the capital. The government estimated that across England 2,414 people slept rough on any one night last year, a rise of 37 per cent since 2010. And street homelessness is only the tip of the iceberg (and a fraction of the actual total as based on single-night snapshots or guess estimates). 113,000 people in England approached their council as homeless in 2012/13, a 26 per cent increase on the 2009/10 figure. At 52,000, annual statutory ‘homelessness acceptances’ were 12,000 higher across England in 2013/14 than in 2009/10.

More importantly, this year’s report reveals that the official homelessness figures mask the true scale of the problem. Increasingly, potentially homeless households don’t show up in those statistics as they are encouraged to choose informal ‘housing options’ – such as financial assistance and debt advice, help to stay in a tenancy or family mediation – instead of making a statutory homelessness application. More than three quarters of cases are now dealt with this way and prevention activity increased by 12 per cent in the last year.

As a result, official figures don’t tell the whole story. To get a better picture the report argues we must focus on all government statistics and doing so reveals a steep increase. As illustrated by the graph below, despite a small reduction in statutory homelessness cases in 2013/14, the total number of ‘local authority case actions’ has continued to rise – up to 9 per cent on 2012/13. 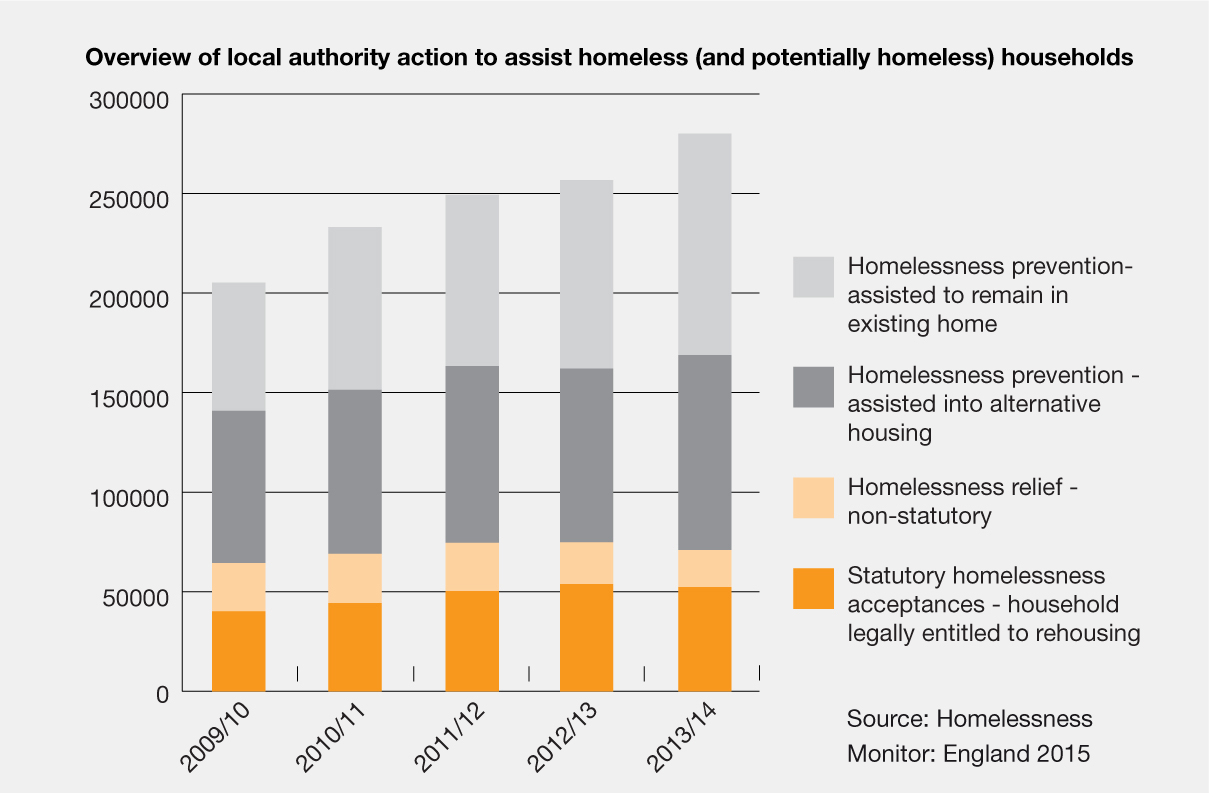 The fact that England has a housing shortage is a key structural factor. The private rented sector in particular is being increasingly relied on to resolve homelessness, yet is failing in too many instances. There’s been an alarming growth of statutory homelessness resulting from the ending of a private tenancy. Homelessness acceptances were 12,000 higher in 2013/14 than in 2009/10. Nearly three-quarters of this increase comes from the sharply rising numbers made homeless from the private rented sector, up by over 9,000 (200 per cent) in four (see figure below). This is now the leading cause of homelessness in England and in June 2014 accounted for 30 per cent of acceptances. In London, the increase was even starker: the annual number of acceptances rose from 925 to 5,960. 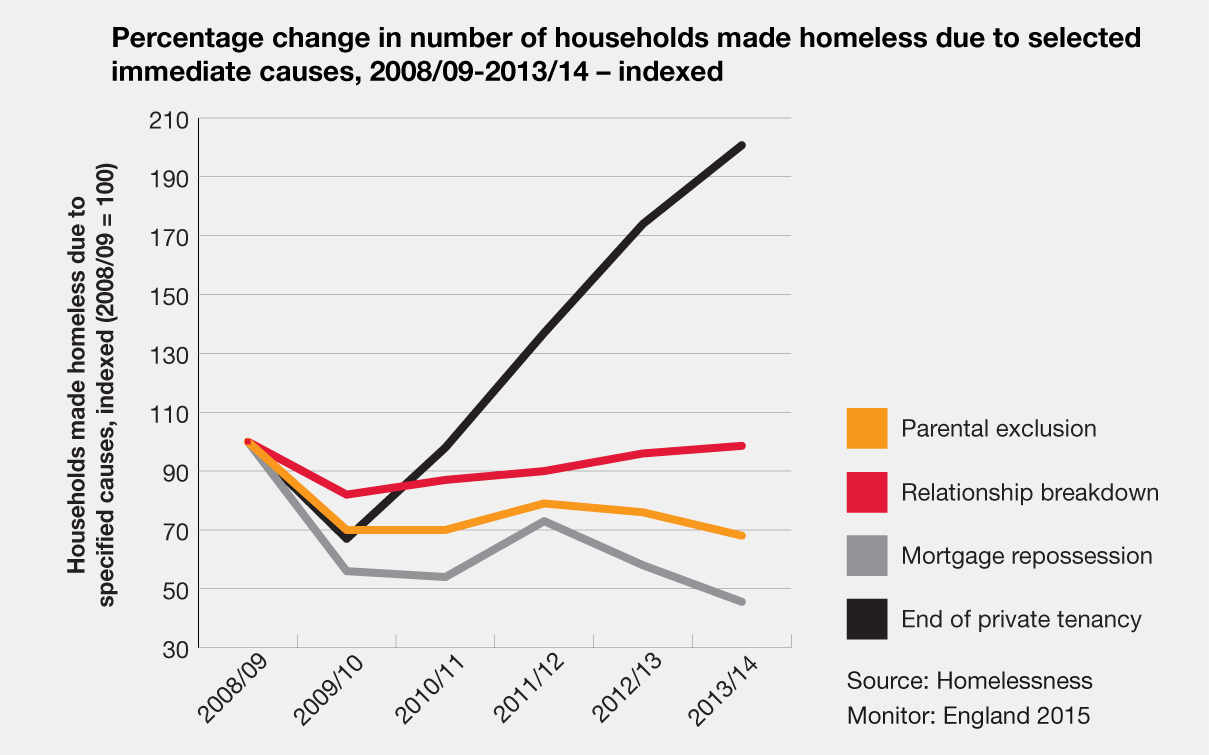 The findings suggest this is the result of the combined impact of welfare reform and sharply rising rents. The sector is becoming increasingly unaffordable and inaccessible for people who are homeless or on low incomes. The situation in London is particularly alarming – it is becoming a world apart in homelessness terms, because of the extraordinarily tight housing market and the disproportionate impact of certain welfare reforms, particularly benefit caps. But the situation outside the capital is also set to get worse over the next two years.

As some of the measures that have helped to mitigate the impacts of welfare reform are removed, deepening benefit cuts will have a bigger impact on homelessness. The budget for Discretionary Housing Payments (DHPs) – the hardship payments which have until now stopped the worst effects of the ‘bedroom tax’ – will go down from £165 million to £125 million in April 2015, at a time when the need for them remains acute. All of this makes it harder for councils to house families and vulnerable people, far less give single homeless people meaningful support. We’ve long believed that single people are being failed by the current homelessness legislation, which does not provide most with rights to housing. And the situation seems to be getting worse: the proportion of single households accepted as homeless in England has fallen from 30 per cent to 23 per cent over the 8 years to 2013/14.

Young people are particularly vulnerable due to the combined impact of high unemployment, benefit cuts and the weakening of the housing safety net. Young adults are also hit hardest by benefit sanctions, and for single and youth homelessness service providers not only in England but across the UK, the severity of the new sanctions regime is a huge concern. On top of this both the Conservatives and Labour have suggested they would remove Housing Benefit from 18 to 21 year olds. The Homelessness Monitor has always been crystal clear on this issue – removing housing benefit from young people will be responsible for a serious rise in youth homelessness.

We need decisive and immediate action to build more genuinely affordable homes; we need a commitment to review benefit sanctions and cuts to housing benefit; and we need greater funding and support for homelessness services. The shift towards local determination of priorities also needs reversing. And the government must collect better information from councils so we can track what’s genuinely happening on the ground. This tide of rising homelessness will not turn until the welfare safety net, including access to genuinely affordable housing, starts to be restored. As the general glection nears, now is the time for the main political parties to look at these findings and adopt the policies which can turn this tide.

Note: A shorter version of this article was originally published on the Crisis blog. This article gives the views of the author, and not the position of the British Politics and Policy blog, nor of the London School of Economics. Please read our comments policy before posting. Featured image credit: Garry Knight CC BY 2.0

Dr Lígia Teixeira is the Head of Research and Evaluation at Crisis, the national charity for single homeless people.