José M. Alonso and Rhys Andrews analyse the dispersal of asylum seekers across English local authorities before and after the Conservative-led privatisation of the system. They find that asylum dispersals to Labour Party ‘core’ constituencies increased since 2011, which suggests that governing parties can use privatisation as a political discipline mechanism.

To establish a more equitable distribution of refugees across their countries, various national governments in Europe have implemented a range of initiatives intended to divert asylum seekers away from large cities. In the UK, concerns about the costs of the dispersal system, led the then-Labour government to launch the Commercial and Operational Managers Procuring Asylum Support Services (COMPASS) project in 2009 – a project brought to completion by the Conservative-Liberal Democrat coalition in 2011. This privatised asylum dispersal regime is unique in Europe, and is rare in countries elsewhere in the world.

In our paper, recently published in Regional Studies, we argue that privatisation of dispersal can potentially be used as a political discipline mechanism to ‘reward’ core constituents and swing voters by diverting asylum seeker to other places. We illustrate this argument by showing that the dispersal of asylum seekers to Labour Party ‘core’ constituencies increased following privatisation of the asylum dispersal system. We also show how dispersals to places with more capacity for hosting refugees decreased, despite contractors being expected to settle asylum seekers in such areas.

It has long been recognised that electoral politics can play a decisive role in determining the geographical allocation and distribution of public goods. However, surprisingly little research systematically investigates the distributive dimension of the geographical allocation of perceived social and economic costs, or the variety of institutional mechanisms through which such distributive outcomes can be attained. According to the core voter model of distributive politics, governing parties reward constituencies that are loyal to them, while the swing voter model of distributive politics indicates that they may seek to induce moderate and nonpartisan voters to support them. Building on these ideas, we propose that a governing party may also reward ‘loyalists’ and swing voters by diverting unwanted social and economic costs away from them and instead imposing them on places populated by partisan opponents.

We further propose that centralized privatisation processes can serve as a political discipline mechanism, ‘a series of bilateral relationships operating though rules, incentives, and anticipated reactions‘, that facilitates distributive politics of this kind. Firstly, by extending the formal rule-making authority of the governing party to monitor and manage the new system. Secondly, by establishing arms-length arrangements that appear to de-politicise policy decisions.

In 2011, COMPASS contracts for the provision of asylum accommodation were awarded to three companies: Clearel, G4S, and Serco, who acted as prime contractors for a given region, with local authorities and voluntary organizations deciding whether or not they wished to opt-in to the property management services offered in their region. Aside from those local authorities already accepting asylum seekers, few authorities have chosen to opt-in to the scheme, as they have not been encouraged to do so by the government. In fact, the Home Office has ignored the advice of the Home Affairs Committee that mandate the involvement of all local authorities in dispersal, even though the Home Secretary retains the right to compel the co-operation of authorities.

Because asylum dispersal is of such high political salience, and because the Home Office has so much influence over authorities’ involvement in dispersal, it is easy to see how distributive political considerations can potentially be brought into play. In particular, because the governing party is responsible for the contract specification, monitoring, and renewal of asylum dispersal contracts, prime contractors have a strong incentive to place asylum seekers in areas that maximize the political advantage of that party.

To examine whether privatisation facilitated the diversion of asylum seekers to core partisan opponent constituencies and away from swing voter ‘battleground’ areas, we analysed the dispersal of asylum seekers across English local authorities during the period 2004-17 – before and after privatisation. In doing so, we focused on dispersals in: i) local authorities firmly in the control of the Labour Party versus authorities controlled by the Conservative Party and the Liberal Democrats; and, ii) in local authorities that are ‘swing districts’, with a narrow margin of victory for the ruling party versus dispersal to all other authorities. Furthermore, we include several key variables likely to influence dispersal in our regression models: house prices; housing availability; institutional capacity; foreign-born population; refugee charities; population size; urban location; and region.

Our results suggest that the dispersal of asylum seekers to Labour-controlled authorities has grown sharply under the privatised system. As Figure 1 indicates, Labour-controlled local authorities have taken vastly more asylum seekers than those with non-Labour party rule in the period after the Conservatives took office alongside the Liberal Democrats. It also highlights that Labour authorities were already accommodating more asylum seekers than other authorities prior to the introduction of the COMPASS contracts. Further analysis indicated that dispersal to core Labour constituencies increased following privatisation, but that swing voter districts accommodate no more or less asylum seekers than other areas. In addition, dispersal of asylum seekers to places with more capacity and better housing availability decreased following privatisation, even though private contractors are formally required to prioritise such areas and can cut their costs by doing so. 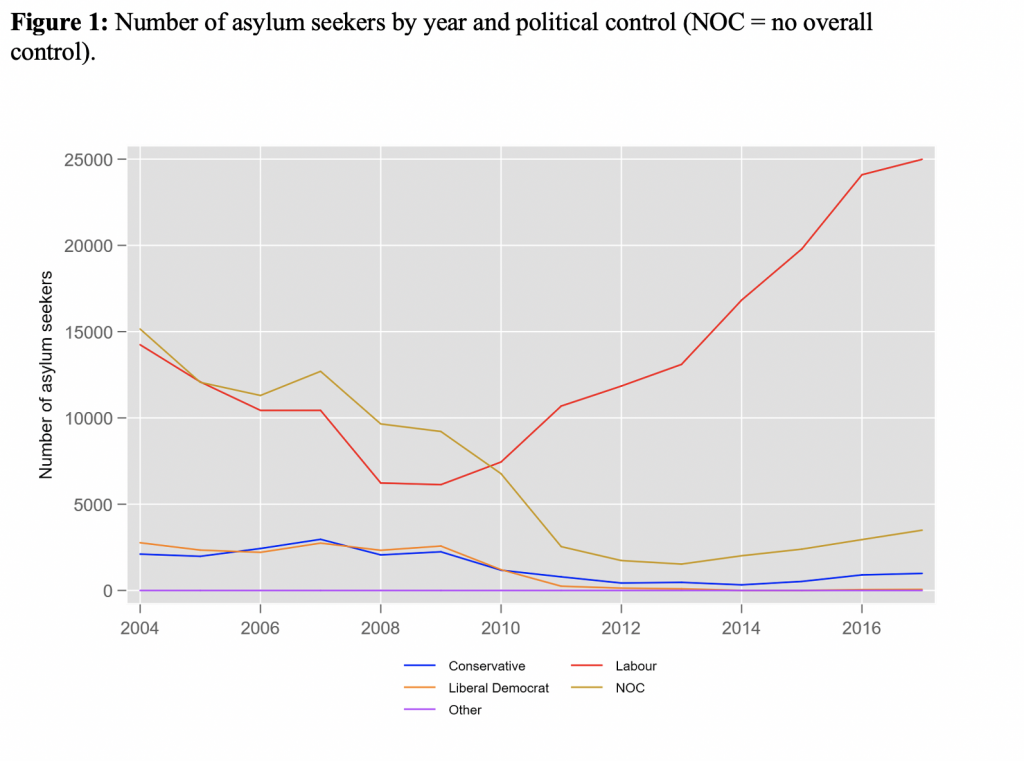 In a centralized and majoritarian political system, such as the UK, it may be especially difficult to guard against the dysfunctional consequences of distributive politics. However, we would argue that the potential for distributive decisions to distort the asylum dispersal system could be mitigated by restricting the scope for manipulation of the funding mechanisms used to allocate resources to local authorities. Indeed, English councils have requested that the present dispersal system be updated to acknowledge the additional resources needed to manage asylum dispersal. Given the ongoing problems with the privatised dispersal system, it would also seem likely that greater local authority involvement in asylum dispersal contracting decisions would be beneficial. It remains to be seen, though, whether a more equitable distribution of asylum seekers can be achieved under the ‘hostile environment’ for immigrants favoured by the current government.

José M. Alonso is Assistant Professor of Economics at the University of Cantabria and Honorary Research Fellow at the Cardiff Business School.

Rhys Andrews is Professor of Public Management at Cardiff University.

Photo by ev on Unsplash. 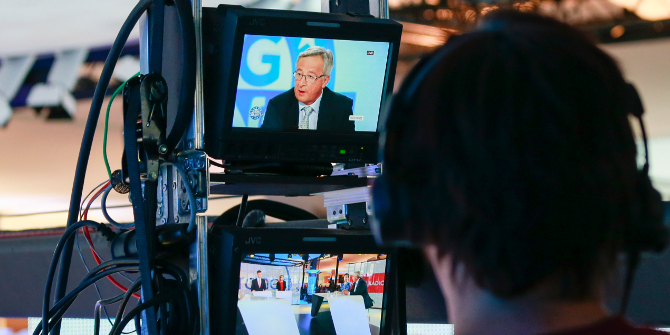