When Cameron used the phrase ‘progressive conservatism’ many assumed that he was moving the party to the centre and would promote some form of social justice. Not so, says Simon Griffiths. Cameron’s progressive conservatism can be seen, therefore, as progressive in the same specific – and less used – sense that Thatcherism was: the state has become an obstacle to progress rather than its conduit, and progress is equated with radical marketisation.

In 2009, a year before leading the Conservative Party back into government, David Cameron announced that his underlying philosophy was ‘progressive conservatism’. What did he mean by this seemingly oxymoronic term? The historian, Emily Robinson, has argued that progressivism has three broad definitions, which can contradict one another: progress as optimism; progress as rupture with the past; and progress as social justice. Cameron’s speech was understood to be about social justice: this was the philosophy which explained the wider changes that he had made to the Conservative Party since becoming leader in 2005, dragging it to the centre and jettisoning aspects of the party’s Thatcherite past. Expanding on an argument previously made in this blog, I argue that ‘progressivism’ for Cameron is much more about rupture with the past and optimism about the future, than the more common understandings of the term. Indeed, I argue his philosophy bears striking similarities to Thatcherism.

During the twentieth century, to be progressive in the Conservative Party traditionally meant some allegiance to centrist, ‘one nation’ forms of conservatism. This strand of thought began with Benjamin Disraeli and included, in the post-war period, R. A. Butler and Harold Macmillan. It stressed the paternalistic obligation of the rich to the poor and tended towards the use of the state to build housing, promote education, provide welfare and healthcare and take an active role in the economy. It understood progressivism as social justice and it was firmly wedded to the state to achieve that end. It was this strand in the Conservative Party that proved a thorn in the side of Margaret Thatcher during her early years in office. For some commentators, Cameron’s embrace of progressive conservatism was part of a rediscovery of that tradition. In 2006, the Daily Telegraph reported that Cameron was ‘heir to Disraeli as a One Nation Tory’.

It seems odd then to draw similarities between Cameron and Thatcher. Yet, like progressive conservatism, Thatcherism was also described in oxymoronic terms. The cultural theorist, Stuart Hall, defined Thatcherism as a project of ‘regressive modernisation’ – a project that is ‘simultaneously, regressive and progressive’. On the one hand, Thatcherism included a backwards-looking, patriotic element focused on restoring British greatness and a moral mission to reassert Victorian values which had been challenged by the permissiveness of the 1960s. Yet on the other hand, with its concentration on free markets, privatisation, deregulation and enterprise, Thatcherism sought to wrest Britain into a modern bourgeois era. Hall’s account of Thatcherism as ‘progressive’ is counter-intuitive. It conflicts with the traditional associations of the term with social justice. Thatcherism was progressive in the less used senses that it included both ‘optimism about the future’ and ‘rupture with the past’. This interpretation pits the moderate, one nation conservatives, who were largely happy with the post-war consensus, against a progressive Thatcherite right, who were seeking to remake Britain.

Since 2010, Cameron’s government has been characterised by retrenchment of the scope and scale of the state. At one level this is seen in the coalition’s stance on fiscal policy. The cuts in government expenditure are severe: ‘the longest, deepest and most sustained period of cuts in public services spending at least since the Second World War’ as the Institute for Fiscal Studies has commented. At another level, the retreat from the state involves a rethinking of the role it plays in promoting social ends in favour of the use of markets or quasi-markets in health, welfare and higher education. Of course, many of these changes continue a trend begun by earlier Conservative and (New) Labour administrations. Under Cameron, however, a pro-market approach has dominated all else. Cameron’s progressive conservatism can be seen, therefore, as progressive in the same specific – and less used – sense that Thatcherism was: the state has become an obstacle to progress rather than its conduit, and progress is equated with radical marketisation.

How does Cameron’s progressive conservatism compare with the ‘regressive’ elements of Thatcherism? Here there is some distance between the two. Cameron has not explicitly sought to re-moralise public discourse through a return to Victorian values, as Thatcher had done, or by going ‘back to basics’ as John Major disastrously attempted. Cameron is more comfortable with modern society than many Conservatives, but he is not entirely relaxed. His support for marriage to be incentivised through the tax system pushes particular ‘traditional’ values. Similarly, his claim that Britain is ‘broken’ involves a regressive element – implying that there was a time in the past when it was not. Cameron’s conservatism is not a regressive project in the strong sense that Thatcherism was, but there are obvious conservative elements to it.

These arguments are developed in an article, What was Progressive in ‘Progressive Conservatism’?, published in Political Studies Review 12(1), January 2014

Simon Griffiths is Senior Lecturer in Politics at Goldsmiths, University of London. He tweets at @spgriffiths. 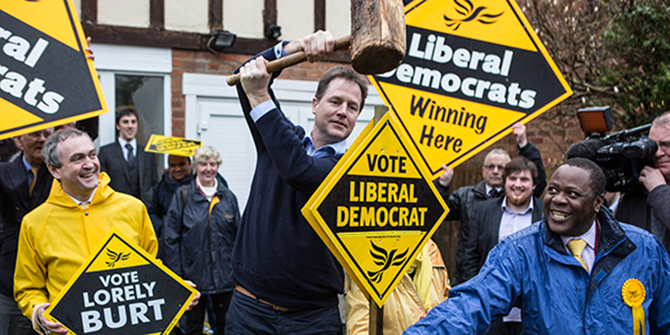