In Red Ellen: The Life of Ellen Wilkinson, Socialist, Feminist, Internationalist, Laura Beers presents a dynamic account of the life of Ellen Wilkinson, a working-class girl from Manchester turned humanitarian, campaigner and politician. Beers’s book offers an insight into Wilkinson’s sometimes controversial life and a period of British history when young people from all walks of life were driven by the desire to enact social change, both at home and abroad. Katherine Williams recommends this book to those interested in the history of the radical left in the UK, social history and, of course, Ellen Wilkinson herself.

On Friday 24 February, author Laura Beers will be speaking about her new biography of Ellen Wilkinson for the LSE Space for Thought Literary Festival 2017. This year’s theme is Revolutions – not only marking the centenary of the Russian Revolution, but also other anniversaries of revolutions in literature, international relations, politics, religion and science. Tickets to all events are free and available here. 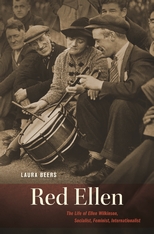 Red Ellen: The Life of Ellen Wilkinson, Socialist, Feminist, Internationalist, authored by Laura Beers, gives readers a vivid insight into the life of one of the most important figures in the history of the British radical left.

Ellen Wilkinson’s accomplishments speak for themselves: she helped to found the British Communist party; was the tenth woman to earn a seat in parliament; advocated for the poor both in the UK and abroad; was one of the first female delegates to the United Nations; helped lead the Jarrow Crusade; and played a central role in the post-World War Two Labour government. As part of her political career, Wilkinson met Lenin and Trotsky in Moscow and not only befriended the leaders of the Indian Congress Party, but also German anti-fascist groups and the Spanish Republican government.

Wilkinson was a self-made woman, and her exceptionalism highlights the scope of opportunity afforded to women active in politics within the interwar period. The boundaries between the private and public spheres were beginning to blur, and women were no longer forced to conform to the oppressive Victorian ideal of the ‘Angel in the House’: the notion that young women were duty-bound to devote themselves to household chores and raising a family. Ellen’s success, however, was not without controversy: her affairs with colleagues garnered accusations of favouritism, and many of her personal papers were burnt by her brother after her death to avoid further scrutiny. Whilst Red Ellen provides an in-depth insight into Wilkinson’s remarkable life and career, it also raises questions about both the history and the future of the radical left in the UK: where has it been, and perhaps more importantly, where it is going.

This relatively short review cannot possibly give the reader a truly in-depth insight into the life and times of Ellen Wilkinson – that is what the book is for. Instead, I have attempted to give the reader a brief glance into Ellen’s early development as an intellectually curious and vivacious child and teenager before turning to the midst of her political career, a period that saw her travel the world in pursuit of social justice. The looming spectre of fascism over Europe in the interwar years triggered something of a crisis in Ellen’s understanding of impending political events: the outbreak of the Spanish Civil War, in particular, did not see the left coming together to overthrow fascism as she had anticipated, despite men and women from across Europe travelling to Spain to fight in the resistance. Europe did not unite, and was subsequently plunged into darkness. 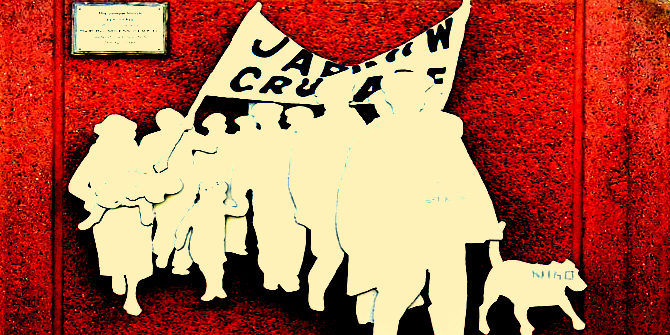 In order to gain an understanding of Ellen’s life, we must start with a look at its foundations. In Chapter One, ‘The Only Girl Who Talks in School Debates’, Beers gives the reader crucial insight into both Ellen’s early life and the Wilkinson family dynamic. Ellen Cicely Wilkinson was born in October 1891 to Methodist parents, Richard and Ellen. The family lived in a house south of the river Medlock, downriver from an area described as ‘Little Ireland’ by Friedrich Engels in The Condition of the Working Class in England (1845), his exposé of the dire living conditions facing working-class families in Manchester and Salford. Regardless of the area’s less-than-favourable associations, the Wilkinson family were considered ‘lower-middle class respectable’ and lived in a community that was relatively socially diverse, getting on well with their neighbours. Despite his lack of formal education, Richard Wilkinson took a strong interest in religious and world affairs, a quality that his daughter shared. Both parents encouraged the passions of their children, but Ellen had more in common with her father, who facilitated her learning.

Ellen was not intellectually stimulated in school, but found ample opportunity to learn about the world through attending Methodist Sunday school classes and by reading voraciously at home. At the age of fourteen, Ellen was reading Ernst Haeckel, Aldous Huxley and Charles Darwin. Her Sunday school classes also afforded Ellen a chance to hone her oratory skills, which would become invaluable to her political pursuits in later life.

Ellen’s formative years saw her develop into a passionate, intellectually curious and politically aware young woman. Instead of going into teaching, as was the norm for young lower-middle-class women at the time, Ellen won a scholarship to study History at the University of Manchester in 1910 with the full support of her family. Yet, Ellen’s political awakening had begun as early as 1908 when she attended meetings of the Independent Labour Party (ILP), and the Church Socialist League (CSL). By 1909, Ellen had not yet ‘found’ feminism, but came into contact with women through the ILP; she would later work alongside them in the women’s movement. Whilst Ellen enjoyed university, she became increasingly distracted by her political activism, but still graduated with a 2:1 in 1913: the highest honour given to a woman that year. Afterwards, Ellen was hired by the Manchester Society for Women’s Suffrage (MSWS) as a paid organiser. Subsequently, Ellen’s lifelong commitment to the women’s movement began; and the rest, as they say, is history.

The Jarrow Crusade of 1936 is seen today as the pinnacle of Wilkinson’s political career. Following the 1935 General Election, Ellen was returned as MP for Jarrow. Ellen was the only woman to participate in the campaign – though she didn’t complete the whole route due to previous commitments – which saw protestors march from their home in north-east England to London to protest the closure of local shipyards and the poverty caused by their subsequent unemployment. However, as Beers notes in Chapter Twelve, ‘Pursuing Social Justice in Britain and Beyond’, it was but a small part in Wilkinson’s transnational quest for justice.

Throughout her career, Ellen’s detractors had argued that her commitment to transnational affairs distracted her from domestic issues. However, there had been less call for her attention at home towards the end of 1934. Despite being the Women’s Organiser for the National Union of Distributive and Allied Workers (NUDAW), there were few strikes to organise. Ellen had argued that the MP salary of £400 was not nearly enough to live on; writing and lecturing therefore became the dominant source of her income. Ellen set sail to the US on the penultimate day of 1934 to investigate Franklin D. Roosevelt’s ‘New Deal’: a series of post-Depression-era programmes that focused on the so-called Three R’s of ‘relief, recovery, and reform’.

Ellen’s own prescription for Britain’s economic woes had been to increase consumer purchase power, in theory similar to Roosevelt’s ‘New Deal’. However, as Ellen observed during her time in the US, industrial control remained the exclusive domain of capitalists. She argued that such moves only increased corporate powers over the state: corporations would be content to give higher wages to workers instead of reorganising inherent structural inequalities. (One can arguably see a parallel in global politics today, particularly in light of President Donald Trump’s cabinet choices.)

Despite her trip to the US, the growing threat of Nazi Germany, the volatile political situation in Spain and Italy’s invasion of Abyssinia, Ellen was nonetheless forced to rethink how best to achieve reform at home and abroad and redefine her political priorities, which ultimately centred on the alleviation of national poverty. Government debates over its stance on the seemingly unwinnable Abyssinian crisis, Ellen argued, detracted from important issues at home, fostering accusations of insincerity and careerism. Beers is careful to point out that whilst Ellen was variously labelled throughout her career, ultimately she was adaptable, and her priorities as a politician shifted with the peaks and troughs of the domestic and international landscapes and reflected the ‘real world’ concerns of her constituents.

On 27 January 1947, Ellen attended her final cabinet meeting as Minister of Education. Unusually, she did not participate in the debate. Her health had become increasingly poor at this point, due to a mix of overwork, addiction to caffeine, asthma and the reputed abuse of both asthma and over-the-counter medication. She died on 6 February 1947 from heart failure resulting from an attack of bronchitis. There was no evidence of foul play, but an autopsy pointed to an overdose of barbituric acid, a key ingredient in sleeping pills.

Today, left-wing activists struggle to find parity in an ever-globalising world. And although Ellen herself could not claim to provide all the answers needed to get by in life, politics and beyond, her career is testament to the importance of questioning the status quo and dismantling the structural inequalities that prevent others from living a life free from the threat of war and socio-economic dissimilitude. Ultimately, if we can learn one thing from Ellen’s example, it is that we must strive to work together for a fairer future for all.

Note: this review was published on the LSE Review of Books.

Katherine Williams graduated from Swansea University in 2011 with a BA in German and Politics. She received a distinction for her MA dissertation on the motivations of women involved in ethno-national liberation movements. Her academic interests include feminist methodologies and political theory, memory and reconciliation politics, and gender in IR. You can follow her on Twitter: @polygluttony. Read more reviews by Katherine Williams.

Editor’s Note: This review was amended on 23 February 2017: the original post read that Ellen Wilkinson retained her seat in Jarrow. This has been corrected.