As the dust begins to settle on the 2017 General Election campaign, Graeme Baxter, Simon Burnett, John Isaacs, Iain MacLeod, Sarah Pedersen, and Elizabeth Tait reflect upon the Twitter response to the two televised Scottish leaders’ debates held in the lead-up to polling day.

Continuing a longitudinal study that has previously investigated Twitter response to televised debates during the 2014 Scottish Independence Referendum and the 2015 General Election campaigns, the research team at Robert Gordon University collected and analysed those tweets sent during the two events that contained the hashtags promoted by the programme makers.

The first debate, broadcast by the BBC, was held at the Mansfield Traquair Centre in Edinburgh, on Sunday, 21st May. Here, the panel consisted of six Scottish party leaders: Nicola Sturgeon (SNP), Ruth Davidson (Conservatives), Kezia Dugdale (Labour), Willie Rennie (Lib Dems), Patrick Harvie (co-convener of the Scottish Greens, and the only one of the six actually standing for election to Westminster), and David Coburn (UKIP). During this debate, over 47,000 tweets containing the programme’s #LeadersDebate hashtag were captured.

The second debate (originally scheduled for 24th May, but cancelled because of the Manchester bombing attack) came from the Tron Theatre in Glasgow and was broadcast by STV on 6th June. Neither Coburn nor Harvie was invited to participate in this event, the latter’s exclusion proving particularly controversial. Compared to the first debate, less than half the number of tweets (just over 22,000) using the programme makers’ hashtag #ScotDebates were sent during the event, perhaps reflecting the haste with which this debate had been rescheduled.

Figure 1 illustrates the frequency with which tweets mentioning the six leaders were sent during the first debate. As can be seen, throughout the 90 minutes Twitter traffic was very much dominated by comments about Sturgeon and Davidson, particularly when the pair exchanged blows over the prospects of a second Scottish independence referendum (‘indyref2’) and when Sturgeon brandished a 4-page Tory campaign leaflet that reportedly contained 26 uses of the word independence. 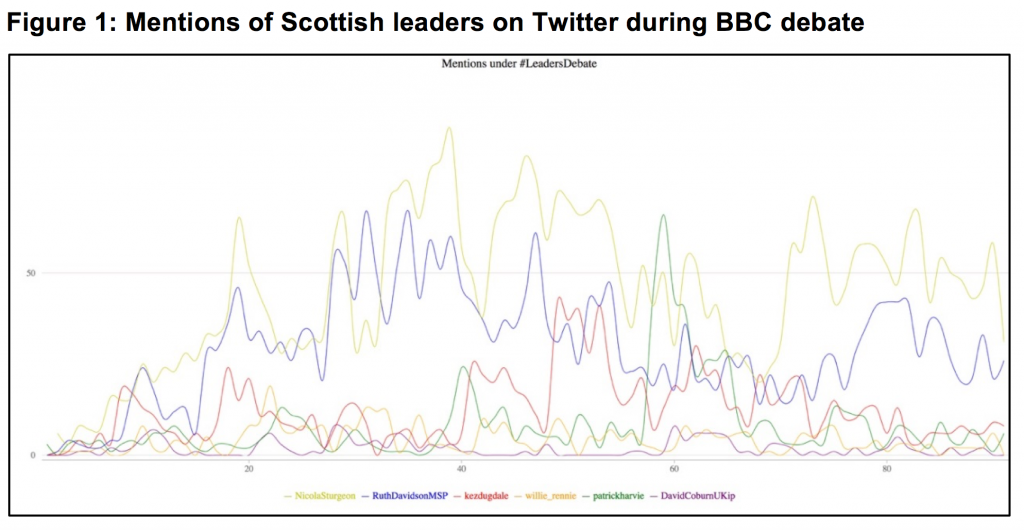 As Figure 1 also shows, Harvie and Dugdale only had a significant impact on the Twitter conversation on one occasion each: when Harvie discussed inequality, describing successive Westminster governments’ corporation tax policies as “a race to the bottom”; and when Dugdale accused Sturgeon of telling “a porky” regarding the education gap between Scotland’s “richest and poorest kids”. Rennie and Coburn, meanwhile, made little impact on Twitter; nor did the two prime ministerial candidates, Theresa May and Jeremy Corbyn, who were rarely mentioned by Twitter users during the debate.

Figure 2 illustrates the extent to which the Scottish leaders (and the UK leaders) were mentioned on Twitter during the 90-minute STV debate. Here, the Twitter audience appeared to be stimulated most by the middle section of the programme, where the four participating politicians were allowed to cross-examine each other. This suggests that this type of feature resonates more with the Twitter audience at home, allowing for more focussed, probing and repeated questioning of politicians. 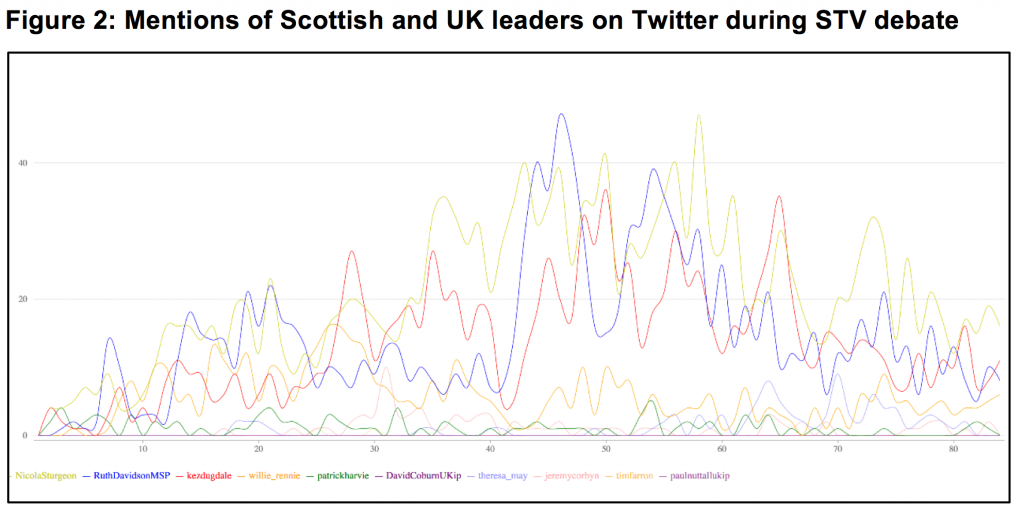 As can be seen, the three female Scottish leaders – Sturgeon, Davidson and Dugdale – featured prominently on Twitter during this section of the debate, in which gendered issues including the child tax credit ‘rape clause’ and ‘WASPI women’ (i.e. Women Against State Pension Inequality) were to the fore, and where the subject of Scottish independence was also discussed heatedly. Despite being mentioned regularly by the four panellists and the audience, May and Corbyn were again largely ignored by Twitter users. Indeed, Patrick Harvie, who of course was excluded from the STV debate, tended to feature just as frequently in Twitter discussions.

The research team has also conducted some preliminary sentiment analysis of the tweets sent during the second debate. As Figure 3 shows, Sturgeon received the most positive response of the night on Twitter, when she attacked the Labour Party’s social policies. Yet, the cross-examination section of the debate saw a huge drop in sentiment from positive to negative in those tweets mentioning Sturgeon, when she was being pressed on indyref2 and on the SNP Scottish Government’s 10-year record. Similarly, the Twitter discussion of Davidson took a very negative turn during the debate around the rape clause. 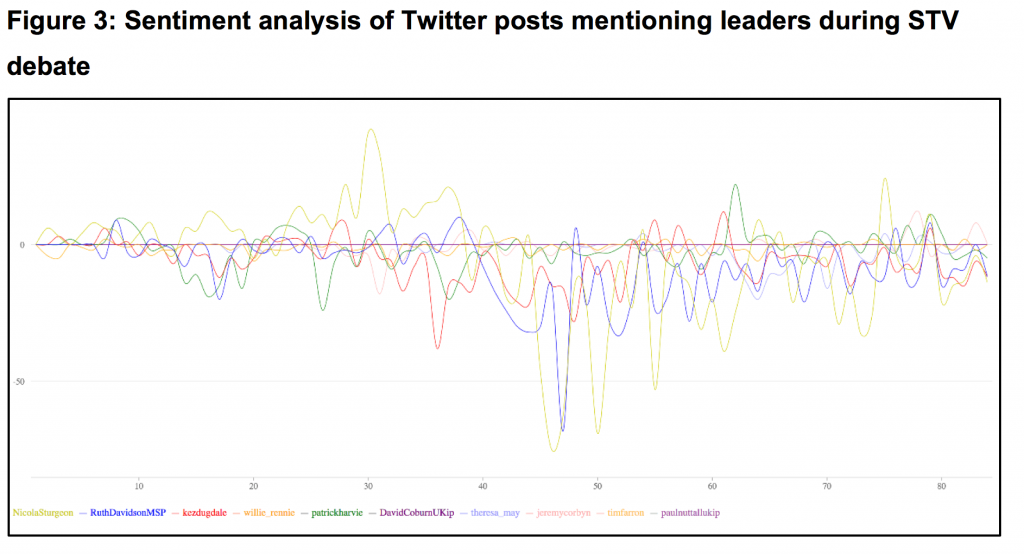 Throughout both debates, then, Twitter conversations paid little attention to the candidates for No.10. Instead, the focus was very much on the participating Scottish leaders (particularly the three women), and often on devolved rather than reserved policy issues.

Although Brexit was discussed on Twitter during the first half of the BBC debate, it featured rarely during the STV event. The prospects of an indyref2, however, figured prominently throughout both debates. And while Sturgeon tended to dominate Twitter discussion as she tried to steer the debates away from independence and towards other issues such as Brexit, Davidson, in particular, tended to make most impact on Twitter when attacking Sturgeon and the SNP on their plans for a second referendum.

Indeed, the election results from Scotland would appear to suggest that Ruth Davidson’s approach gained considerable traction, not only on Twitter during the televised debates, but also throughout the wider campaign discourse. The loss of 21 SNP seats (12 to the Conservatives, including those of political heavyweights such as Alex Salmond and Angus Robertson) and a 13.1% drop in the share of the overall vote, led the Deputy First Minister John Swinney to acknowledge that the question of an indyref2 “was a significant motivator of votes against the SNP”. Davidson herself immediately proclaimed that “indyref2 is dead”. It remains to be seen whether plans for a second independence referendum are dead, mortally wounded, or have simply received a temporary setback.

Simon Burnett is a Professor specialising in Information Management at Robert Gordon University.

John Isaacs is Lecturer in Computing at Robert Gordon University.

Iain MacLeod is Lecturer in Strategy and Policy at Robert Gordon University.

Sarah Pedersen is a Professor of Communication and Media at Robert Gordon University.

Elizabeth Tait is a Senior Lecturer in Information Management at Robert Gordon University.