Analysing the social media strategies of Labour and the Conservatives during the 2017 general election, Paolo Gerbaudo explains that the latter focused on negative issues such as Brexit and terrorism, while Labour focused on positive ones, such as the promise of higher social spending, generating higher levels of engagement.

Social media are widely held to have played an important role in the 2017 UK general election. But it is not altogether clear how exactly they contributed to the communication battle between Labour and the Conservatives. The rapid reversal of fortunes in Labour’s favour in 2017 was nevertheless largely down to the party’s ability to use social media and create a wave of enthusiasm and optimism among voters. Besides the important contribution of unofficial channels to this end, a central role was played by the official Facebook, Twitter, and Instagram accounts, which in the present social media-centered politics have become fundamental propaganda channels. Jeremy Corbyn’s Facebook page, for example, currently counts 1.5 million ‘likes’, while Boris Johnson’s trails behind at 780K. Posts from these channels then get a high number of shares, giving them a reach sometimes equivalent to official party political broadcasts.

Figure 1: Facebook engagement during the 2017 election campaign, per party

But successful campaigning it is not merely a matter of reach: it is essential that messages resonate with the electorate. In 2017, Labour outperformed the Conservatives on this point. Looking at user engagement over the 53  days of the 2017 campaign, we see that Corbyn surpassed May in terms of engagement by a much wider margin in terms of organic reach (i.e. excluding the impact of paid posts). Jeremy Corbyn’s personal Facebook page also outscored May’s page (5 million vs. 771,000). Similarly, Labour attracted 3 million user engagements during the campaign – almost three times that received by the Conservatives (1.3 million).

According to our research, this success was largely down to Labour emphasising hope and optimism, vis-à-vis the Conservatives’ narrow focus on Brexit. This is clearly seen in the type of content which the two parties concentrated on.

The Conservatives’ communication strategy on Facebook tended to focus on ‘negative’ issues, such as Brexit and terrorism. Also prominent was the issue of national security elicited by the two terrorist attacks that took place before and during the campaign in Manchester and London. Posts belonging to this category frequently employed words such as ‘security’ (47 occurrences), ‘safe society’ (18), ‘threat’ (12), as well as more specific references such as ‘extremism’ (30), ‘attack’ (17), and terrorism/terrorist (31). The Conservatives emphasised the fact that they were a ‘safer pair of hands’ compared to Jeremy Corbyn. This strategy proved disappointing in terms of user engagement, with comparatively low levels of interaction in the form of comments and Facebook reactions. 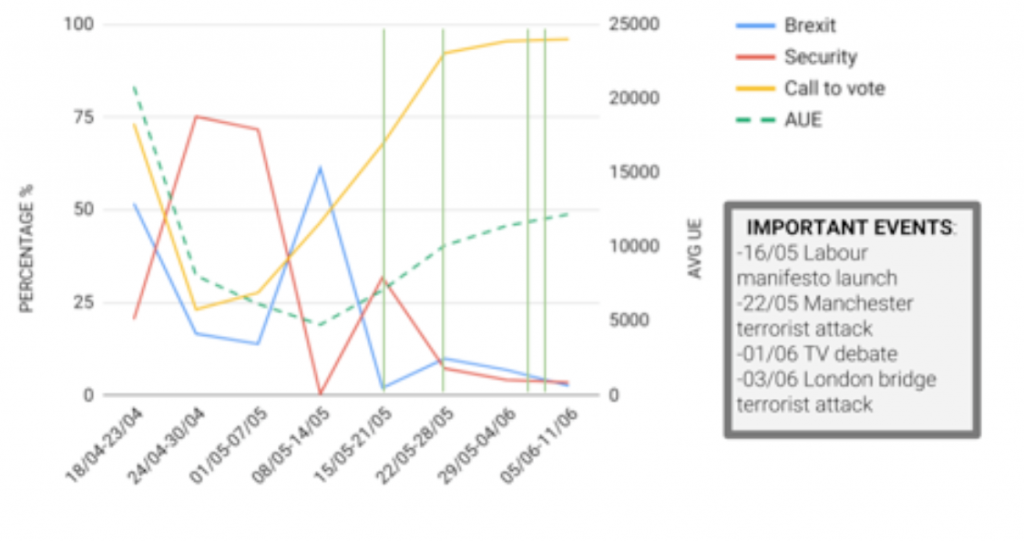 Labour adopted a diametrically opposed strategy during the 2017 campaign. It deliberately tried to avoid Brexit, concentrating instead on social spending, with the aim to project an optimistic and motivational narrative. Particularly important in terms of topics was also the issue of welfare. Posts falling under this category included terms such as ‘NHS’ (203 occurrences), ‘workers’ issues (130), assertions about the need to defend ‘rights’ (53), create ‘jobs’ (26), as well as to ‘support’ (50) and ‘deliver services’ (58). This enthusiastic messaging seemed to pay off, as Labour had a far higher level of engagement from followers; the content of posts and the content of comments left was also consistent.

Moving beyond a number of misconceptions that are prevalent in contemporary debates, what can be seen in this case is that positive messages can also go viral, as long as they manage to capture and inspire the targeted audience. In fact, psychological research conducted on Facebook by its own data science team seems to suggest that positive messages are more likely than negative ones to go viral. Our findings thus suggest the need for a more balanced understanding of the relationship between content, emotions, and user engagement on social media, moving beyond simplistic views of social media politics as necessarily biased in favour of aggressive and negative campaigning.

Note: the above draws on the author’s published work (with Federico Marogna and Chiara Alzetta) in Social Media + Society.