Katharine Dommett and Luke Temple discuss the potential for expert-inspired reforms to boost citizens’ satisfaction with parties. They provide evidence that a perceived lack of expert engagement in parties predicts citizen dissatisfaction, and explain the traits that define the appeal of expertise.

Frequently described as unrepresentative, undemocratic, self-interested and divided, it is well established that the public – in the UK and other western democracies – are far from satisfied with political parties. Less clear is how, if at all, parties might be changed to improve citizens’ views. Whilst creating supporter networks and opening up channels of participation has been a common response, we explore the role that might be played by greater engagement with experts to help improve public perceptions. This might seem counter-intuitive in an age of populist scepticism towards elites, but we find a broadly positive link between views on expert engagement in parties and satisfaction with parties. However, further data from deliberative workshops with both activists and the public demonstrates that this general trend hides complications and contradictions in public opinion. This means that parties face multiple challenges if trying to realise citizens’ desires for expert engagement.

The position of experts has been the subject of increasing debate in recent years. Whilst some have claimed the public have had enough of experts, there is in fact evidence that people are attracted to the idea of experts playing a role in politics. Indeed, a prominent study from the US found that:

‘People would most prefer decisions to be made by what we call empathetic, non-self-interested decision makers…The people are surprisingly smitten with the notion of elite experts making choices.’

Considering this possibility in the UK, we set out to examine citizens’ views of experts and expertise in the context of political parties. We examined public views through a nationally representative survey fielded by YouGov and three deliberative workshops. Supporting previous studies of expertise, we found that people have positive views. When asking how often parties should ideally think about the opinion of different groups we found that 50% of respondents wanted experts to be thought about more than half the time. This group statistically out-performed potential voters (43%) and party members (39%). But it was not the only favoured group as 65% of respondents also wanted the majority of the public to be considered. 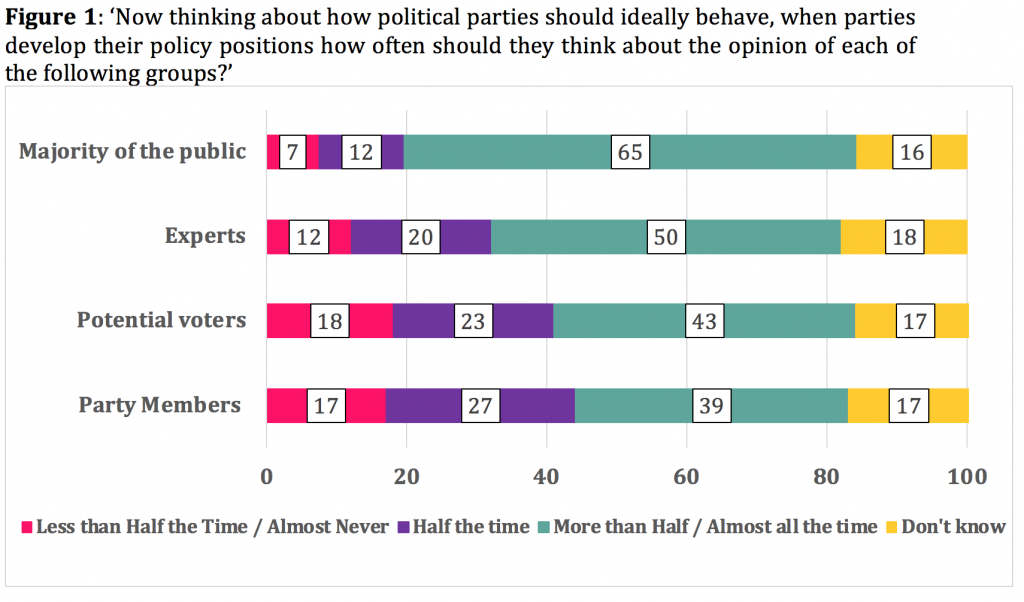 We then asked how often parties actually thought about these groups and, by looking at the gap between questions, found that 56% of people felt that parties listened to experts less than they would wish. Using regression modelling we examined if these attitudes towards who should be listened to might be associated with satisfaction with political parties (further accounting for party support, strength of partisanship, left-right ideology, age, gender, education, class and attention to politics).

And yet, in reaching this conclusion, it is important to think further about what this finding means in practice. Whilst notions of expertise and expert engagement can feel intuitive, findings from Science and Technology Studies show that people in fact have very different understandings of these ideas. For this reason, we used deliberative workshops to unpack citizens’ ideas and identified three important elements that relate to the role of the expert; who counts as an expert; and expert status and partisan affiliation.

First, when talking about their desires for experts and expertise, workshop participants showed that they had important preferences for the role of experts. Whilst people were comfortable with the idea of experts informing parties and aiding the formulation of policies and decisions, many had concerns about experts being given any power to make decisions.

Second, different participants felt that different people counted as experts. Although there was a widespread and instinctive belief that experts are people with qualifications or professional knowledge, some people – although only after a period of discussion – also argued that people could be experts on the basis of personal and lived experience. For instance, discussing expertise in healthcare, one participant noted ‘if you’re a carer say, then let’s speak to her and get her views on what it is like to be a carer’. Or, as a participant put it more generally, ‘If we go with academics you can potentially know how an aircraft carrier works, but do they know how to drive it?’.

Finally, we also found that the partisan status of experts mattered. Some people wanted experts to be ‘neutral’ and ‘value-free’ actors who gave advice to all parties; yet others wanted experts who only gave advice to parties they agreed with. The weight of support generally fell in favour of more neutral, independent actors, reflecting a commonly-held belief that values should have no influence over the reasoning of scientists. However, our participants acknowledged that parties would interpret even ‘neutral’ evidence in a partisan way, as the following exchange between participants highlights:

Looking at these three points, it appears that people have complex desires for parties and appear to favour a certain form of expertise.

In thinking about the implications of this finding for parties, it is also important to question the reliability of public views. Many parties already draw on expertise. Indeed, there have been relatively high-profile examples such as Labour’s creation of an expert panel to advise on economic policy (although, this initiative seemed to run aground relatively quickly). Even amongst the better-informed activists, few workshop participants knew that parties already used expertise. This suggests that public views may not be the most informed, raising questions about the degree to which parties will want to act on the basis of these ideas.

In summary, we find that whilst experts have appeal, they are not a panacea for parties’ troubles. Even if parties can navigate citizens’ specific and complex desires, recent examples suggest that there is no guarantee that these activities will even be noticed, let alone improve perceptions.

Katharine Dommett (@KateDommett) is Senior Lecturer at the University of Sheffield and Director of the Crick Centre for the Public Understanding of Politics.

Luke Temple (@la_temple) is Teaching Associate in Political Geography at the University of Sheffield.