The UK public voluntarily agreed to give up fundamental rights and liberties in the fight against COVID-19 on the assumption that this suspension applied to everyone – in other words, that governance remained democratic, writes Dimitris Skleparis. This is why Dominic Cummings’s lockdown breach has stirred a heated debate and this is why the government’s handling of the situation has already reduced public trust in democracy.

Both the government’s and the Prime Minister’s approval rates have recently recorded a significant drop, according to the latest Opinium/Observer public opinion poll conducted amid the Dominic Cummings row. Why has this story generated such a heated debate? We draw on an online representative public attitudes survey (n= 2100 people) about the coronavirus crisis, which was administered between 10 and 15 April – in retrospect, a key point in time: the UK was in its fourth week of lockdown, the Prime Minister was in hospital, and Dominic Cummings was in Durham. At that stage, a clear majority (66%) believed that the government had managed this pandemic very or fairly well. People also had more positive feelings about the way in which the British government had responded to this crisis: 44% felt hope; 42% felt acceptance; 38% felt confidence; and 35% felt unease.

Colleagues have already highlighted the key role of social solidarity in explaining the high levels of compliance with lockdown rules in April and May. They have also emphasised the importance of personal responsibility, as well as the need for clear communication from the government for ensuring that the public receive the right messages to continue to comply with the rules. It would be fair to argue then, that the public feel aggrieved because they perceive the actions of the PM’s Chief Strategist as compromising the widespread sense of personal responsibility and social solidarity in the fight against this virus.

However, there is more at stake here: the ability of democracy to self-regulate amid a state of exception. Equality before the law is the cornerstone of democracy. Everyone is and ought to be subject to the same laws. In liberal democracies, and in a warranted state of exception, such as the imposed lockdown in the face of COVID-19, civil rights and liberties are temporarily suspended, and emergency rules and laws take the place of ‘ordinary’ ones in the name of the public good. When one voluntarily agrees to give up fundamental rights and liberties, they do so on the assumption that, as laws apply horizontally to everyone during ‘normal’ democratic governance, so does their suspension during ‘exceptional’ democratic governance. In other words, one has faith that democratic governance is capable of remaining democratic, even in exceptional times.

In mid-April when our survey was conducted, the general concern about the spread of COVID-19 was very high among the population, with 90% worried (48% very worried), and women more worried than men (52% and 44% respectively). There was a widespread sense that the pandemic posed a threat to Britain’s future (79%), rather than to each one of us individually (59%). In other words, it was perceived as a collective, rather than an individual, existential threat. Indeed, a large majority (83%) perceived the government’s measures to combat the coronavirus as necessary to prevent a major national catastrophe. There was consensus (59%) that minimising the number of deaths from COVID-19 should have priority even at the expense of the national economy.

It was against this background that the public warranted the introduction and implementation of rules and laws that constituted, or would constitute, an unprecedented transgression of civil rights and liberties in peacetime. Draconian measures, such as allowing people to leave their homes only for essential reasons, closing all UK borders, enabling the government to use the military to enforce isolation measures, and maintaining the ‘lockdown’ for at least six months were met with exceptionally high levels of support (85%, 76%, 64%, and 50% respectively). The only ‘red line’, perhaps, drawn by the public in terms of civil rights and liberties concessions concerned the right to privacy, with only 42% being in favour of the government’s use of mobile phone records to stop the spread of the virus. In all, only 22% considered the government’s measures a greater threat to civil liberties than the virus itself, and only 32% were concerned about Britain becoming a police state.

This eagerness with which the public conceded fundamental rights and liberties surprised even the Prime Minister. Soon after announcing the easing of lockdown measures on 13 May, he allegedly stated to colleagues that “I’ve learnt that it’s much easier to take people’s freedoms away than give them back”. Indeed, this was not the first time, (and perhaps not the last one either) that public attitudes to civil liberties were comparatively less liberal and generally chimed with the direction of public policy, particularly in relation to issues of national security.

One should be careful, however, not to overstate this factor. This would run the risk of obscuring the British public’s trust in democratic governance, and the potentially important role that this attitude played in warranting a temporary state of exception. 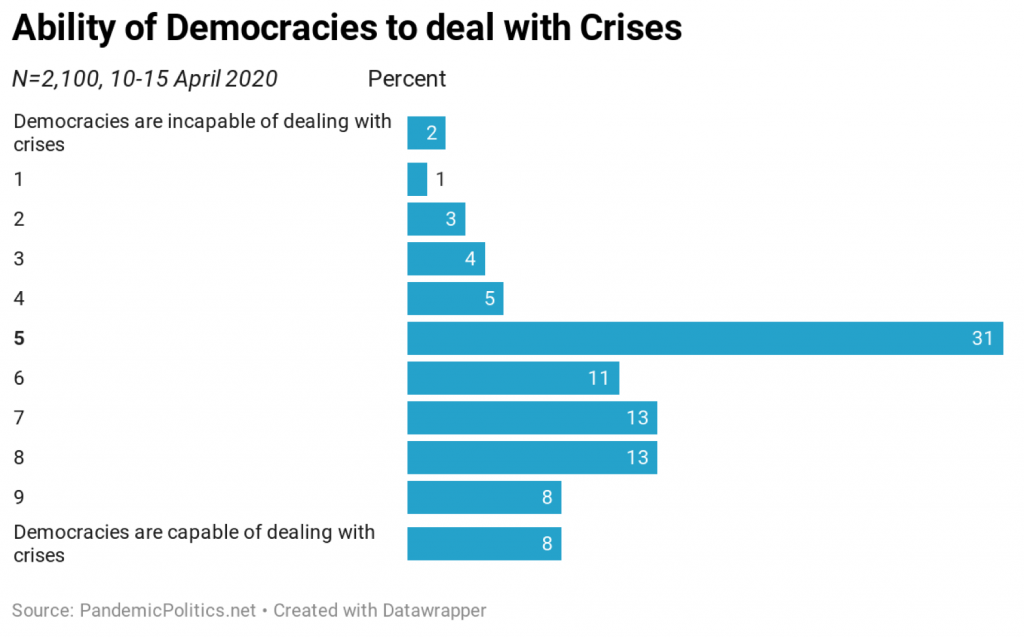 At the time of our survey, the public were fairly or very satisfied (77%) with the way democracy worked in the UK, and had trust (54%) in the UK government. On the whole, the majority (54%) had trust in democracies being capable of dealing with crises, compared to only 15% who were thinking otherwise. What is important to highlight at this point, however, is the 31% who placed themselves in the middle of this scale. This may suggest that approximately one third of the respondents were not yet convinced about the ability of democracies to deal with crises of such magnitude, or simply recognised that this is something that will only show in the long run.

It is primarily for this 31% who build their trust in democracy on a day-to-day basis that one needs to be very careful about the messages that are being communicated during this pandemic. The public agreed to temporarily give up their civil liberties with the premise that, as laws apply equally to everyone during ‘normal’ democratic governance, so does, or should, their temporary transgression during ‘exceptional’ times. The public’s perception that ‘all animals are equal, but some animals are more equal than others’ has stimulated a very heated debate. What is mainly at stake here, however, is the public’s trust in democracy’s ability to successfully counter a crisis of such magnitude, and, yet, remain democratic.

Dimitris Skleparis is Lecturer in the Politics of Security at Newcastle University. 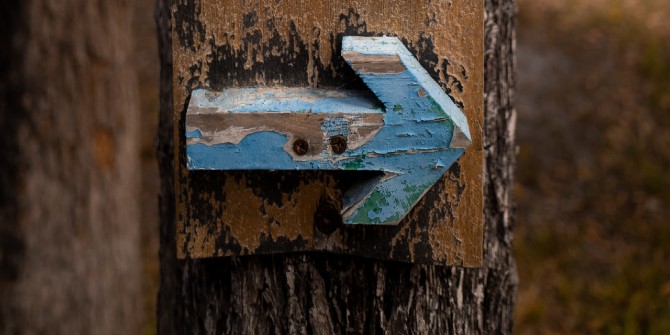