The restricted focus of mainstream economists has meant that not much attention has been given to the economic and social consequences of changing income and wealth inequality. Jon D. Wisman critiques their restricted scope and contends that it impeded them from seeing how 30 years of wage stagnation and soaring inequality were generating excessive speculation, indebtedness, and political changes that set the underlying conditions for the financial crisis of 2008.

The financial crisis of 2008 launched the second most severe depression in capitalism’s history. Although its causes have been endlessly discussed, attention has remained fixed on surface reality or proximate causes such deregulation, inadequate oversight, low interest rates, “irrational exuberance,” and moral hazard. Ignored has been what was going on beneath the surface: 30 years of wage stagnation and exploding inequality—powerful forces that were churning up complex dynamics to make a financial crisis all but inevitable. During the 1920s, the same forces had set the stage for the crash of 1929, but the economics profession missed that one too.

The magnitude of exploding inequality since the mid-1970s is captured by the following: Between 1979 and 2007, inflation-adjusted income, including capital gains, increased $4.8 trillion — about $16,000 per person. Of this, 36 percent was captured by the richest 1 percent of income earners, representing a 232 percent increase in their per capita income. The richest 10 percent captured 64 percent, almost twice the amount collected by the 90 percent below. Between 1983 and 2007, total inflation-adjusted wealth in the U.S. increased by $27 trillion. If divided equally, every man woman and child would be almost $90,000 richer. But of course it wasn’t divided equally. Almost half of the $27 trillion (49 percent) was claimed by the richest one percent — $11.7 million more for each of their households. The top 10 percent grabbed almost $29 trillion, or 106 percent, more than the total because the bottom 90 percent suffered an average decline of just over $16,000 per household as their indebtedness increased.

This soaring inequality generated three dynamics that set the conditions for a financial crisis. The first resulted from limited investment potential in the real economy due to weak consumer demand as those who consume most or all their incomes received proportionately much less. Not being capable of spending all their increased income and wealth, the elite sought profitable investments increasingly in financial markets, fuelling first a stock market boom, and then after the high tech bubble burst in 2001, a real estate boom.

As financial markets were flooded with credit, the profits and size of the financial sector exploded, helping keep interest rates low and encouraging the creation of new high-risk credit instruments. This enabled more of the elite’s increased income and wealth to be recycled as loans to workers. Financial institutions were so flush with funds that they undertook ever more risky loans, the most infamous beingthe predatory subprime mortgages that often were racially targeted. As the elite became ever richer, those below became ever more indebted to them. When this debt burden became unsustainable, the financial system collapsed and was bailed out by taxpayers.

The second dynamic resulting from wage stagnation and soaring inequality is that as the elite with ever more income and wealth ratcheted up their consumption on luxury goods in competition among themselves for the pinnacle of status, everyone below was pressured to consume more both to meet family needs and to maintain their relative status or social respectability. In effect, the elite’s dramatically larger shares of income and wealth led to a “consumption arms race.” Pressure was especially strong in housing, the most important asset and symbol of social status for most Americans. As a consequence, over the three decades building up to the crisis, the household saving rate plummeted from 10 percent of disposable income in the early 1980s to near zero by 2006, as Figure 1 illustrates. By 2007, the average married household worked 19 percent more hours than they did in 1979—the equivalent of over one extra work day per week, or an extra 14 work weeks per year—and household debt as a percent of disposable income doubled from about 62 percent in 1974 to 129 percent in late 2007. 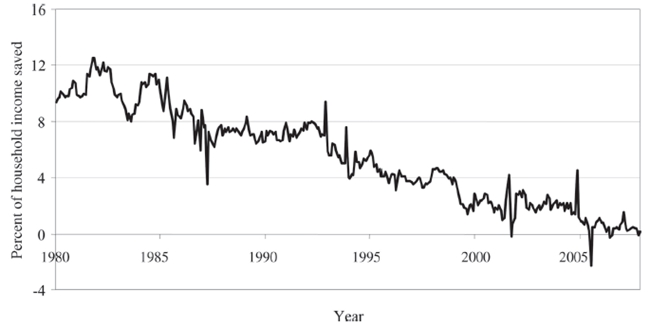 The third dynamic is that as the rich took an ever-greater share of income and wealth, they and their corporate interests gained greater command over politics and ideology so as to further change the rules of the game in their favor. The proliferation of right-wing think tanks, corporate lobbyists and corporate campaign contributions leveraged their political influence. In their competition for status among themselves, they understandably supported self-interested economic and political measures that brought them yet greater shares of the nation’s income and wealth.

As the elite’s command over essentially everything grew, so too did their ability to craft self-serving ideology—especially supply-side economics, a variant of laissez faire economics—in a manner that made it be ever-more convincing to a majority of the electorate. Flowing out of this ideology were tax cuts favoring the wealthy, a weakened safety net for the least fortunate, budget cuts for public services, freer trade, weaken unions, deregulation of the economy (especially the financial sector), and the failure to regulate newly evolving credit instruments. 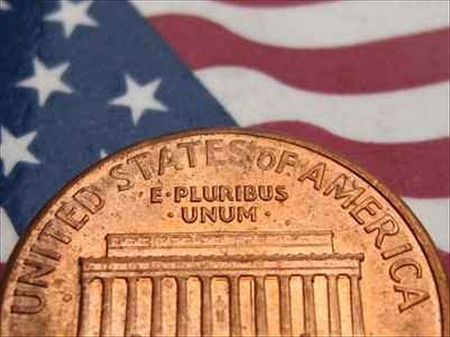 How did the mainstream of economists not see the unstable financial conditions that soaring inequality was creating? Generally because economists have not viewed the distribution of income and wealth as an important domain of study. The 1995 recipient of the Nobel Memorial Prize in Economic Sciences even went so far as to declare that “Of the tendencies that are harmful to sound economics, the most seductive, and in my opinion the most poisonous, is to focus on questions of distribution.” Moreover, rising inequality has long been dismissed by economists as either irrelevant (if everyone is becoming materially better off, the size of shares is unimportant) or as missing the economic dynamism that inequality generates (which in fact it does not!!).

Mainstream economists were also blinded to the dynamics greater inequality set in motion by their tendency to focus narrowly on market phenomena, their refusal to study the manner in which humans as social beings react to the behavior of others, and their failure to address the nexus between economic and political power.

Economists might have stood a better chance of foreseeing the developing financial crisis had they thrown their nets far wider to catch the insights that have been harvested by a wide range of so-called heterodox economists. From the underconsumptionist tradition of Keynes, Kalecki, and Minsky they could have developed an understanding of how inequality affects aggregate demand, investment, and financial stability. From the institutionalist tradition of Thorstein Veblen they could have learned how consumption preferences are socially formed by humans who are as concerned with social status and respectability as with material well-being. And from the Marxist tradition they could have seen how economic power translates into political power. Economists have failed to grasp the wisdom of one of the foremost students of crises: “the economist who resorts to only one model is stunted. Economics is a toolbox from which the economist should select the appropriate tool or model for a particular problem.”

This article has been drawn from the paper “Wage Stagnation, Rising Inequality, and the Financial Crisis of 2008,” which was published in the Cambridge Journal of Economics.

Jon D. Wisman – American University
Jon D. Wisman is Professor of Economics at American University in Washington, DC. He has published articles and chapters in a wide variety of journals and books, and edited Worker Empowerment: The Struggle for Workplace Democracy. His most recent published work has addressed the potential for employer of the last resort programs and the role of inequality in generating economic crises and environmental devastation. 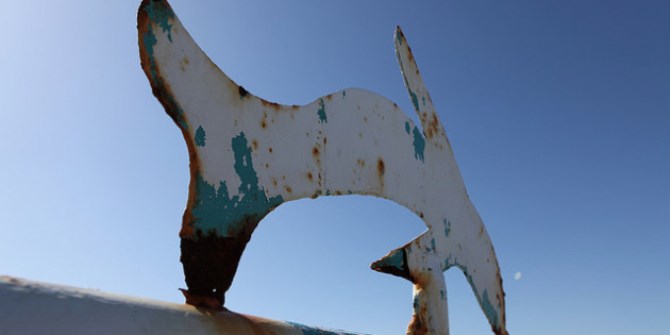