Despite not being talked about often in British politics, oil has a very important role in the economic and political issues that confront the West. Helen Thompson draws on her new book to explain the problems that the rising cost of oil posed in the years leading up to the 2008 crash, and the difficulties that a volatile oil market currently poses to economic recovery.

Oil is a fundamental material fact of collective life, but it is little talked about in British politics. Yet oil played a big part in the economic crash of 2008 and it is an important part of why it has been so difficult for the Bank of England to return monetary policy to any semblance of normality over the past few years. The international politics of oil production and consumption are shifting geo-political plates in ways that weaken American power, divide the interests of European countries, and ensure a contested international monetary order. If British politicians don’t want to talk about oil, they can’t avoid its increasingly sweeping consequences.

Although the western recessions of 2007-09 are usually understood as the result of the global financial crisis, this narrative distorts what were two inter-related developments over the preceding decade that culminated in 2008. From 2002 to the middle of 2008 oil prices rose from around $27 a barrel to $156. By far the sharpest part of this rise occurred over the last twelve months of the period, with prices near doubling from $82 a barrel in June 2007 to $156 a year later. It was this acute increase in oil prices that sent western economies into recession before the bankruptcy of Lehman Brothers in September 2008 crashed financial markets and deepened those recessions. 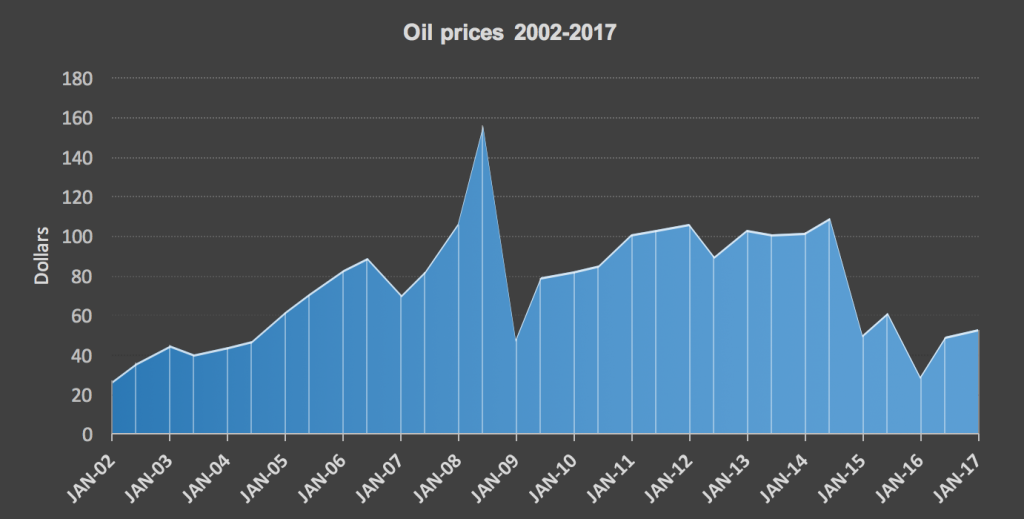 Source: Macro Trends. Prices are for West Texas intermediate and inflation adjusted to May 2017.

Prior to 2008 the Bank of England had been grappling with the impact of rising oil prices for a number of years. In September 2005 the then Governor of the Bank, Mervyn King, gave a speech in which he declared that oil prices had ended the era of what he termed NICE, non-inflationary consistently expansionary economic growth. As King explained, rising oil prices were not a passing contingency but the consequence of fundamental changes in the international economy. The rise in living standards in non-western economies, in particular China, was dramatically increasing demand for oil. Indeed, China’s oil consumption rose from 3.9 million barrels per day in 1997 to 8 million in 2008. Meanwhile oil production stagnated in the middle part of the 2000s, as ageing oil fields passed or approached their peak, not least in Saudi Arabia, and political turmoil and western sanctions stymied production in Iraq, Iran, Venezuela, and Nigeria.

In this new energy environment British inflation and output would be volatile and real disposable incomes would suffer. In such a world, King argued, the Bank of England simply could not use monetary policy to deliver quarter-by-quarter growth or achieve economic stability, and politicians and voters needed to be disabused of any idea that it could. Indeed, in practice, the Bank would spend the second half of 2006 and the first half of 2007 using monetary policy to try to contain the risk that rising oil prices would lead to rising wage demands and, in effect, hoping that higher interest rates would reduce growth and hence push oil prices down.

Although King’s speech received relatively little comment at the time, he was effectively explaining that British politics was becoming subject once again to the kind of energy constraints that produced such political tumult between the early 1970s and the mid-1980s, and the kind of monetary constraints that caused such difficulties for the Conservative governments between the mid-1980s and mid-1990s. In this economic world growth would not be a given, sterling would be prone to severe fluctuation, and distributional conflicts would prevail. The immediate aftermath of the 2008-09 British recession proved him correct. The return in 2011 of high oil prices slowed economic recovery and intensified the political difficulties around the Coalition government’s attempt to cut the budget deficit. Indeed, it was only because the Bank of England, unlike the European Central Bank, decided to ignore its inflation target in the face of the rise in oil prices over 2011 that the British economy was saved the double-dipped recession that afflicted the euro zone.

What, however, King could not have foreseen was that the turn after 2008 to quantitative easing and zero interest rates would ultimately establish conditions that in making shale and tar sands oil production possible would create a different set of monetary predicaments. Oil prices began to slide in mid-2014 and the fall escalated when in November of that year the Saudi government persuaded its fellow OPEC members to let the price crash in the hope of both bankrupting American shale producers and inducing Russia to end its support for the Assad regime in Syria. As a consequence, the Bank of England had to abandon its plan, formed just the month before oil prices began to fall on the premise that the economy was now returning to normal, to start to tighten monetary policy. More than three years later the Bank still has not been able to raise interest rates.

If high prices caused one set of problems, low prices have caused another. There is now no equilibrium price that would simultaneously keep large-scale shale production viable, allow sufficient market share for conventional oil producers, and allow western and emerging-market economies to grow at rates that will meet the material and political expectations of their citizens. Oil has produced inescapable predicaments. It is rhetorically easy to vow to end the sale of petroleum- and diesel-fuelled cars over the next few decades, as the British government has done. But the determination to retreat from oil whilst the world continues to consume around an additional 1 million barrels a day for each year that has passed since 2008 can only reinforce all the economic and political dysfunctionality oil creates.

Note: the above draws on the author’s book, Oil and the western economic crisis.

Helen Thompson is Professor of Political Economy at the University of Cambridge. Her latest book Oil and the western economic crisis was published by Palgrave in 2017. For a full list of publications, see here.