This Saturday marks the one-year anniversary of the start of the London Olympics. Editor of the new book London 2012: How Was It For Us? Mark Perryman argues why sport is a political subject. He urges us to combine a critique of the London Olympics with an understanding of what a better sport culture would look like, to recognise that the corporate domination of sport for many is their most vivid and meaningful experience of commodification, and to appreciate that sport is politics.

Of course how fast an individual can run, how far they can chuck an object, how high they can jump hardly matters at all in the greater scheme of global justice and human rights. But that isn’t what is being claimed on behalf of sport here. Rather it is the grand emotional narrative sport can help construct, arguably in the early twenty-first century more effectively and more internationally than any single other cultural pursuit. That is surely something all observers of modern culture can agree upon, whether we like it or not. With the possible exception of web 2.0, no other cultural form comes close to sport in terms of its global appeal. But then who apart from the geekiest of the geeks is going to cheer on Apple vs Microsoft in the way millions cheered on London 2012’s ‘Super Saturday’ of grandstanding athletics. 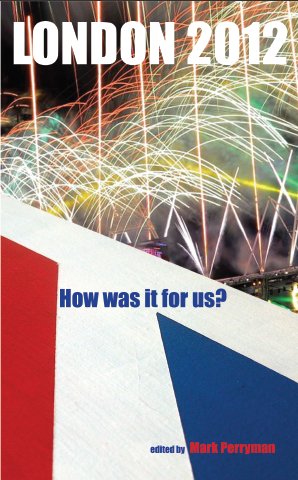 There is a certain version of po-faced intellectualism that can on occasion decry anything meaningful to be derived from the masses’ enjoyment of sport. It’s as if those of us who do the cheering have handed in any consciousness we might have at the turnstiles, or those of us who do the training leave the same at the bottom of the changing room locker along with the smelly socks and half-eaten energy bars.

This is a critical politics that justifies do-nothingness, of disengagement with the popular for fear of getting ideological hands dirty. It creates a vacuum, which those of a reactionary, and worst, bent, will fill with greedy readiness. Keeping politics out of sport, the pastime will remain unchanged, for the worse. Back in the 1980s there was a trend in some varieties of the social sciences to take popular culture seriously, including sport. Garry Whannel was one of those who at the time set out the reasons. In his pioneering book, Blowing the Whistle, Garry suggested a five point manifesto:

First, the need to take all aspects of social life seriously, especially popular cultural forms like sport. Second, recognise that sport contributes to the way people see the world, engage and offer alternatives. Third, physical well-being, health and fitness are important to human development. Fourth, play in some form will be an important element of a more fulfilling society. Fifth, leisure will become an increasingly politicised issue, battles will be fought over who has leisure time, how it is spent and how it is provided for.

Garry set out the context he and others were up against: “Sport is marked down as a natural, taken-for-granted activity. You don’t need to talk or write about it. You just do it.” The pressure from within the academy to take popular culture seriously could be traced back to the First New Left. One of the figures most closely identified with this period, Stuart Hall, set out in an autobiographical essay why such a focus was so important:

“First, because it was in the cultural and ideological domain that social change appeared to be making itself most dramatically visible. Second, because the cultural dimension seemed to us not a secondary, but a constitutive dimension of society.”

Hall offered this position as representing a fundamental challenge to how politics was traditionally defined.

“In these different ways the New Left launched an assault on the narrow definition of ‘politics’ and tried to project in its place an ‘expanded definition of the political.’ The logic implied by our position was that these ‘hidden dimensions’ had to be represented within the discourses of ‘the political’ and that ordinary people could and should organise where they were, around issues of immediate experience; begin to articulate their dissatisfactions in an existential language and build an agitation from that point.”

It was an analysis that Hall translated into a programme of political action governed by “a recognition of the proliferation of the potential sites of social conflict and the constituencies for change.” In the mid to late 1950s this was truly groundbreaking stuff, leading directly to the emergence of cultural studies as an academic discipline. By the mid 1980s the kind of politics Hall was proposing was being applied in a wide variety of ways, one of which was via the kind of writing on sport Garry Whannel and others were beginning to develop and popularise. Collaborating with his co-editor, fellow academic Alan Tomlinson, in 1984 Garry co-edited the collection Five Ring Circus, a critique by a diverse group of writers and activists of the forthcoming Los Angeles Olympics, widely recognised as the Games which accelerated the process of commercialisation into all that the Olympics have now become.

One year on from London 2012 the failure to fulfill the three core pledges is obvious. No sustainable jobs increase, no socio-economic transformation of London’s East End and perhaps most damning of all next to no significant increase in levels of participation in sport. In reviewing these failures we need to combine critique with an understanding of what a better sport culture would look like. This requires an appreciation that while sport is socially constructed at the same time it has a liberatory potential. To recognise that leisure, recreation and participation are vital parts of any good society. And that the corporate domination of sport for many is their most vivid and meaningful experience of commodification. In short, a recognition that for some of us, sport is politics.

London 2012 How Was It For Us is published by Lawrence & Wishart. Contributors include Mark Steel, Zoe Williams, Billy Bragg, Suzanne Moore, David Renton, Yasmin Alibhai-Brown and others. Available as a pre-publication, exclusive Mark Steel signed edition, £2 off, just £12.99, and post-free from here

Does school spending matter? Early years investment may offer higher returns – but the returns erode unless topped up during later phases of childhood

From the OBR's report to Miliband sibling rivalry: round up of political blogs – 12-18 June