In the lead up to the 2016 election, many Congressional Republicans joined the #NeverTrump movement in opposition to Donald Trump’s candidacy. In new research Lauren Johnson, Deon McCray, and Jordan Ragusa investigate why some lawmakers signed on to the movement while others did not. They find that the most significant predictors for joining the #NeverTrump movement were lawmakers’ religion and sex: Mormon and female Republicans were more likely to oppose Trump.

It seems the Republican Party is in the midst of a transformation. As Michele Swers put it in a recent USAPP blog post, “shock waves” are flowing through the GOP due to: (1) Paul Ryan’s decision to step down as Speaker of the House of Representatives, (2) the retirement of more Republicans in any cycle since 1930, and (3) the loss of key GOP activists and donors.

Although this story is still unfolding, commentators are debating the causes of these unprecedented events. Naturally, Donald Trump’s presidency is at the center of these discussions. Yet before Trump’s victory, academics and non-academics alike were focused on the #NeverTrump movement, a term referring to Republican elites who refused to endorse Trump during the campaign. In this respect, although the 2016 election was decided 17 months ago, the current conversations are not unprecedented.

In a recent work, we explored the question “‘why did Republican lawmakers oppose Trump’s candidacy in the 2016 campaign?” There are diverse—and often contradictory—explanations of the #NeverTrump movement offered by politicians, pundits, and journalists in 2016. After cataloguing these explanations, we distilled them into four theoretical categories: (1) policy preferences, (2) identity, (3) electoral motivations, and (4) establishment dynamics.

We then tested these popular explanations by compiling data on every Republican member of Congress’s public position on Trump’s candidacy. In two analyses, we explored the direction of a lawmaker’s position (support Trump vs. oppose Trump) as well as the intensity of that position (based on the timing of their announcement).

In Figure 1 below, we present the significant predictors of Trump’s 2016 support, according to our analyses. In the figure we order the significant predictors from top the bottom based on their absolute effect size. A variable that “matters most” is at the top, while those at the bottom are significant but have comparatively smaller effect sizes. Green dots indicate the predictor decreases in a lawmaker’s #NeverTrump probability while red dots indicate the predictor increases a lawmaker’s #NeverTrump probability.

Figure 1 – Why Republican Members of Congress Joined the #NeverTrump Movement 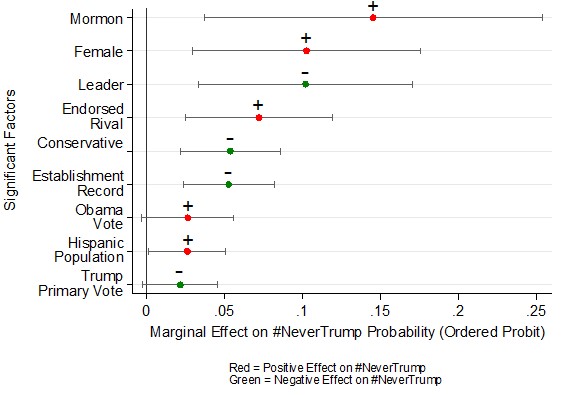 Identity determines which lawmakers were #NeverTrump

Our main finding is that two factors in the identity category best explain a lawmaker’s position on Trump’s candidacy. In particular, the strongest determinants of a Republican’s endorsement were their religion and sex. According to our results Mormon and female Republicans were more likely to oppose Trump’s candidacy while non-Mormon and male Republicans were more likely to support Trump. This finding mirrors research on the importance of lawmakers’ personal characteristics, which often receive less attention in the literature on legislative behavior than they deserve.

Notably, these findings dovetail with a number of studies on the behavior of voters in 2016. For example, recent work from Valentino, Wayne, and Oceno explores the role of gender in the 2016 election, finding that sexism was a key force in both the campaign and the decision to vote for Trump. Likewise, research by Mutz shows that issues threatening to white Americans played a key role in the election while a paper by Hooghe and Dassonneville finds effects of both racial resentment and anti-immigrant sentiment.

It is also notable that the effects of religion and sex dwarf the effects of a dozen electoral variables. Despite the tendency to view lawmakers as single-minded in their focus on reelection, our results indicate that electoral motivations were the weakest determinants of the #NeverTrump movement.

In the analyses we also find the establishment/anti-establishment divide in the GOP was an important factor in #NeverTrump movement, but in a perhaps surprising way. Although Trump publically criticized the establishment of his own party, and despite the popular narrative that Trump’s candidacy was “revolt” against traditional Republicans, our results indicate that lawmakers with establishment voting records and those in leadership positions were more likely to back Trump. Stated the other way, it was the anti-establishment that opposed Trump.

Although our results are perhaps counterintuitive, they mirror research on the factional nature of the modern Republican Party, and are also broadly consistent with the claim that party elites coordinate their endorsement decisions in pursuit of collective electoral success.

Lastly, we examined how a Republican lawmaker’s ideology shaped their position on Trump’s candidacy. We note that there was considerable disagreement in the popular explanations as to whether conservatives would be more or less likely to back a candidate like Trump.

Despite the claim of many that Trump is not a “traditional” conservative, we find that conservative members of Congress were more likely to support Trump. In the aftermath of the election, we note that this mirrors Arizona Senator Jeff Flake’s concerns in his book “Conscience of a Conservative,” where he suggests conservatives may be on a “bumpy ride” with Trump.

While most observers are focused on the electoral dynamics of Trump’s presidency, we are interested in the behavior of Republican lawmakers. Interestingly, we find that identity was a powerful force in Republicans’ endorsement decisions, mirroring findings for voters, with a lawmaker’s religion and sex key influences on Trumps’ Republican support and opposition in Congress. We also find—to the surprise of many—that establishment Republicans were more likely to back Trump during the 2016 campaign.

We think these dynamics, and our research in particular, must be weighed in balance. At the beginning of Trump’s candidacy, there were few lawmakers on the frontlines to support him. Many who expressed initial opposition sided with the president for the welfare of the party, House Speaker Paul Ryan being the supreme example. However, it may be the case this support was contingent, and the terms of agreement unbearable. Yet what seems to be true is that Trump is reshaping party politics, and both these movements must be considered thoughtfully. Although opposition is tentative, identity is permanent.

Note: this article is based on the paper ‘#NeverTrump: Why Republican members of Congress refused to support their party’s nominee in the 2016 presidential election’ in Research and Politics.

Note: This article was originally published by the LSE USAPP blog.

Jordan Ragusa is Associate Professor in the Department of Political Science at the College of Charleston.

Lauren Johnson is a senior at the College of Charleston double majoring in political science and music.

Deon McCray is a senior at the College of Charleston majoring in political science and accounting. 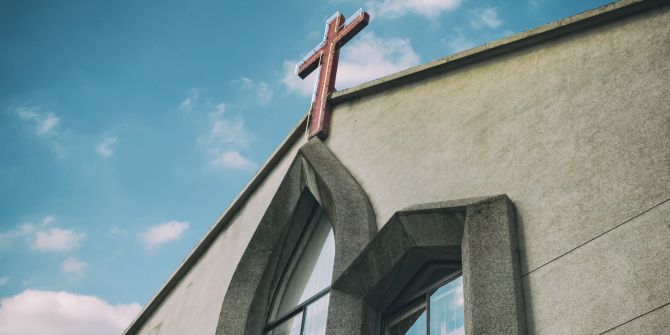 Interfaith Beyond the Pandemic: from London communities to global identities 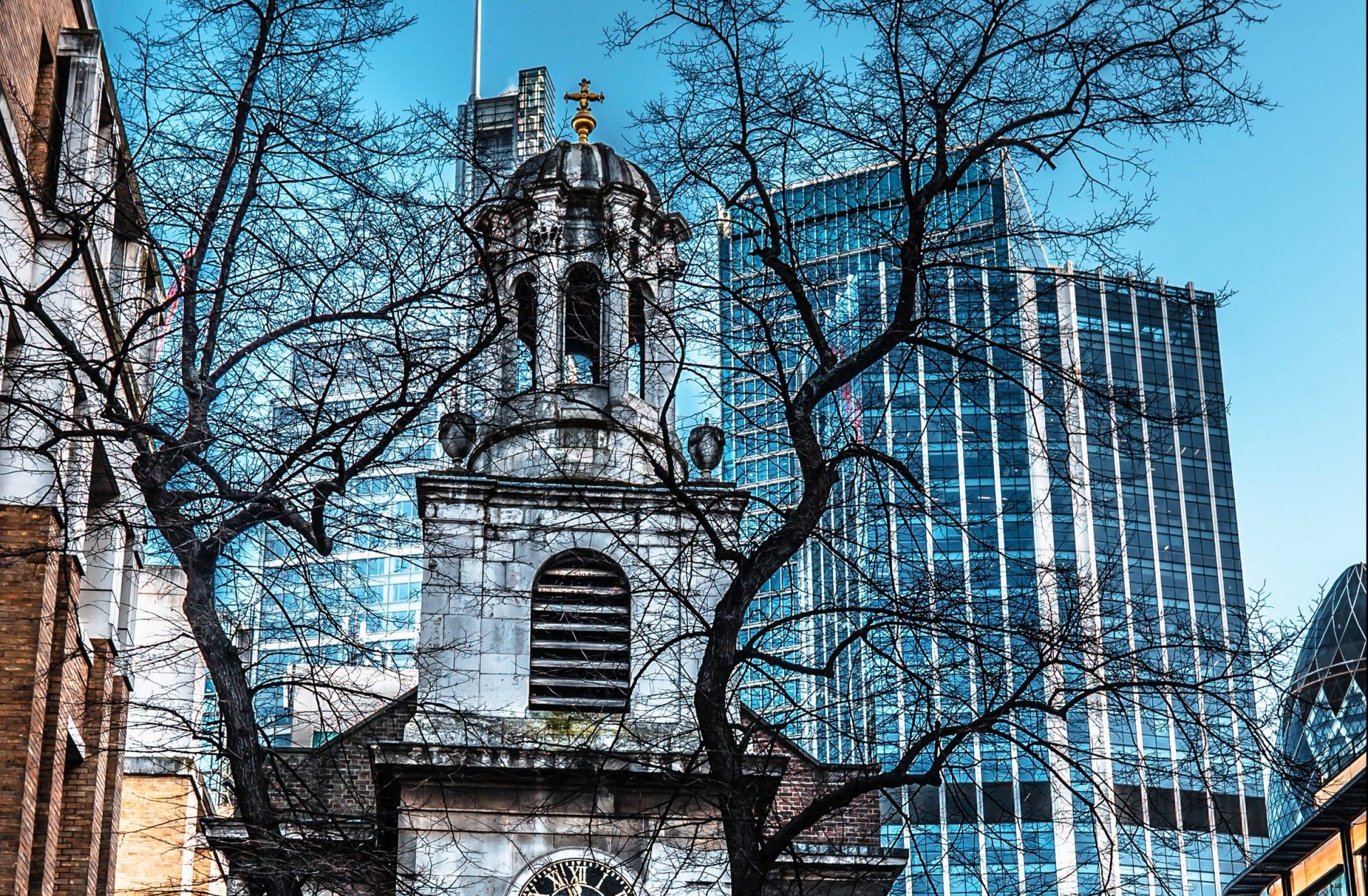