What motivates U.S. federal judges and the types of decisions they make? While for a great deal of time, many judicial commentators have maintained that translating their own political values into law is the prime motivator for federal judges, Lee Epstein and Jack Knight disagree. Looking at the U.S. courts over the past 60 years, they find evidence that policy-centric accounts can no longer explain judicial behavior. They argue that judges are motivated by aspects of job satisfaction, external satisfaction, leisure, salary, and promotion – not just by ideology.

Among political scientists not only is it uncontroversial to say that U.S. federal judges—especially U.S. Supreme Court justices—seek to etch their political values into law; it would be near heresy to suggest otherwise. And yet we do just that because research conducted by scholars (mostly outside of political science) has demonstrated that the policy goal isn’t the only motivation; it may not even be dominant for many judges.

The evidence is now so strong that it poses a serious challenge to the extremely (un)realist(ic) conception of judicial behavior that has dominated the (political science) study of law and legal institutions for generations.

The evidence comes not only from empirical studies but also from facts that strike us as difficult to explain with reference only to policy motivations. First, since 1946 the U.S. Supreme Court has decided over a third of its cases by a unanimous vote (Figure 1). Unless the Court is full of justices who share the same ideology—almost never the case—something other than or perhaps in addition to ideological goals must be driving this behavioral regularity. (We also observe very low dissent rates on the U.S. courts of appeals, even on ideologically diverse panels.) 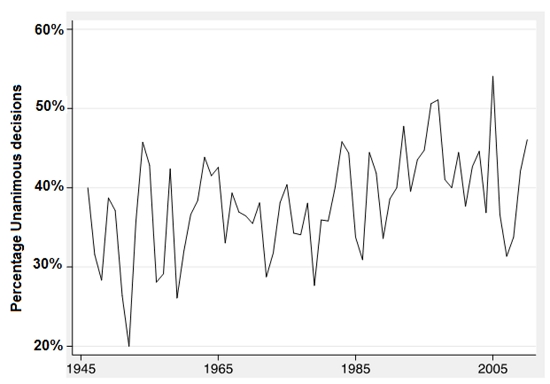 Second, how should we think about the extraordinary success of the United States government, which is usually represented by the Solicitor General (SG) in the Supreme Court (see Figure 2)? By their own admission, scholars advocating the policy goal cannot explain these data, and for good reason. As Black and Owens demonstrate, the SG’s influence stems not from ideological congruence but from the office’s professionalism and objectivity—explanations that are hard to square with the image of justices as politicians in robes. 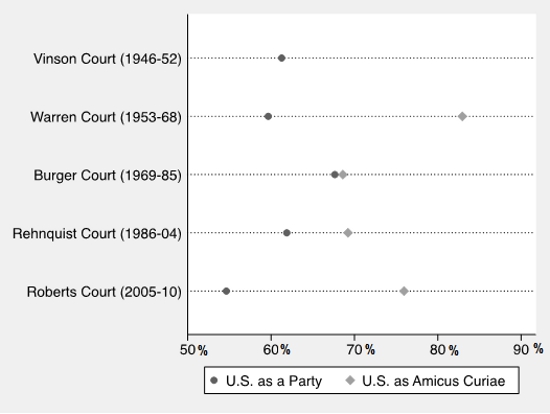 Source: Provided to the authors by Ryan Black and Ryan Owens.

A third fact seemingly incompatible with policy-centric preferences is the decline in the Court’s plenary docket (the number of opinions issued after full plenary consideration).  As Figure 3 shows, the number of petitions granted has fallen from 255 in 1970 to 76 in 2009; the percentage granted has also taken a nosedive, from 6 percent in 1970 to less than 1 percent in 2009. Wouldn’t policy-oriented justices want to hear more rather than fewer cases so that they could leave their mark on wider swaths of the law? 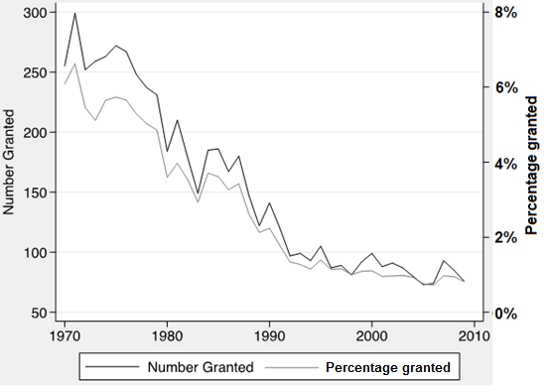 Skepticism over the exclusive focus on policy preferences is not new; four decades ago, Judge Richard A. Posner raised the possibility that “judges, like other people, seek to maximize a utility function that includes monetary and nonmonetary elements (the latter including leisure, prestige, and power).” Later, to the question “What Do Judges Maximize?,” Posner had a simple response: “The Same Thing Everybody Else Does”—their own self-interest, which may include imposing their policy preferences on the law but so much more.

We agree. Policy-centric accounts simply can’t explain important aspects of judicial behavior. So what does? By our count, commentators have offered (or found evidence consistent with) some 20-odd goals, motives, and preferences, ranging from “reasoning utility” to discretion  to income. To consider all of these would be to continue to undermine the project of developing a more realistic conception of judicial behavior. The enterprise would devolve into “what-the-judge-ate-for-breakfast” accounts (but see this), not to mention limit generalizability.

The basic argument is as follows. Because there are only 24 hours in a day, judges must decide how to allocate their time among judicial activities (e.g., hearing and deciding cases, working with colleagues and staff), non-judicial work (e.g., writing books, participating in conferences, teaching), and leisure. Given time constraints, judges seek to maximize their preferences over a set of personal factors (most of which also have implications for ideological and legal goals):

(1) Job satisfaction. By this we mean “the internal satisfaction of feeling that one is doing a good job” as well as the more social dimensions of judicial work, such as relations with other judges, clerks, and staffs. Surely maximizing policy preferences is part and parcel of a judge’s internal satisfaction with the job but it is not the only influence. Another is the discretion a judge enjoys. As for the social dimensions, judges frequently refer to the importance of collegiality, and just as frequently, scholars reject it. We should not. As most of us know all too well, maintaining good collegial relations is not some abstract squishy concept; it has a direct effect on job satisfaction.

In the formal economics literature, there is a long-standing debate over the extent to which reputation (or power-seeking) judges ought to be followers (by applying existing doctrine) or more avant-garde. Either way, this literature reinforces the idea that there is a more important connection between law and the decisions judges make than an exclusive focus on ideology allows.

(3) Leisure. A preference for leisure plays almost no role in the political science literature but it comes to the fore in many economic analyses of judging.  If these accounts are right, we would expect judges to engage in behaviors designed to increase or, at the least, protect their existing leisure time. The decline in the U.S. Supreme Court’s plenary docket may be an example (see Figure 3). In general, though, leisure will be of greater concern for judges with heavier workloads and less staff than the Supreme Court. In addition to decreasing leisure time, backlogs can decrease respect and thus external satisfaction, not to mention job satisfaction. Along these lines Cohen reports that district court judges with heavier dockets were more likely to invalidate sentencing guidelines on the theory that the guidelines would discourage plea bargaining and, thus, increase trials.

(4) Salary/income. All else equal, judges, like most of us, prefer more salary, income, and personal comfort to less. And the empirical literature provides some evidence that they attempt to maximize these goals by acting in ways consistent with the preferences of their “bosses”—of which the legislature is certainly one. Because elected representatives control raises, court budgets (and so, for example, can augment or reduce the number of staff), and pension plans, it is not surprising to find some deference to their preferences.

(5) Promotion. Promotion would seem to be an important factor influencing the personal utility that judges gain from their work. It could be coincident with policy preferences: the higher judges sit in the hierarchy, the more important the cases they hear and the greater the opportunity to influence the law. So too, promotion tends to increase job satisfaction, prestige and reputation, and, of course, salary. Perhaps this explains the growing number of empirical studies showing that judges motivated by the possibility of promotion to higher status (and paying) jobs —the “auditioners”— make choices based on their interest in advancement. For example, Epstein, Landes & Posner show that auditioners, not wanting to appear soft on crime, impose harsher sentences on criminal defendants.

The upshot of this is that there is now a large and growing body of empirical literature providing evidence for (or at least consistent with) each of these elements in the judge’s personal utility function.

Next, we must begin to flesh out the details of a motivational model of judges that would form the basis of a more realistic conception. If the process of judicial decision making is best characterized as a complicated mix of motivations, then the motivational framework should allow us to accommodate this complexity and, perhaps, to distinguish the conditions under which different types of motivations apply.

At the end of the day, we realize that we’re calling for nothing short of a restructuring of the very foundation of the (political science) study of judging. But this should be a cause for celebration, not dismay. In reimagining our corner of political science, there will be plenty of challenges, yes, but plenty of opportunities for new theoretical, empirical, and substantive breakthroughs.

This article is based on the paper “Reconsidering Judicial Preferences” from the May 2013 Annual Review of Political Sciences.

Lee Epstein – University of Southern California
Lee Epstein is the Provost Professor of Law and Political Science and the Rader Family Trustee Chair in Law at the University of Southern California. She is also now serving as a Phi Beta Kappa Visiting Scholar, a Guggenheim Fellow, and a Lecturer in Law at the University Chicago. Professor Epstein is a Fellow of the American Academy of Arts and Sciences and the American Academy of Political and Social Science.

Jack Knight – Duke Law School
Jack Knight is the Frederic Cleaveland Professor of Law and Political Science at Duke University. His scholarly work focuses on modern social and political theory, law and legal theory, and political economy. He holds a joint appointment with Duke Law School and Duke’s Trinity College of Arts and Sciences, where he teaches in the Politics, Philosophy and Economics Program.