In 1988, Yellowstone National Park in the Northwest United States experienced the largest wildfires in its more than 100-year history. Shannon K. Orr and Nichole Fifer take a close look at the reactions of policy-makers in the U.S. and Canada to the fires, writing that while Parks Canada adopted a policy of ‘let-burn’, U.S. authorities have taken a far more interventionist line. They argue that these reactions are the products of the two country’s differing political systems. In Canada decision-making is highly centralized, and largely rests with Parks Canada, while in the U.S., the separation of powers often means that public policies are open to multiple avenues of influence, and power often rests with political appointees and federal politicians.

In the summer of 1988, television viewers across the United States and Canada were transfixed by images of Yellowstone National Park seemingly consumed by flames as wildfires burned almost one million acres of land within the Greater Yellowstone Area (GYA).  Politicians, the media and the public criticized the National Park Service (NPS) for failing to control the fires and protect the park. The political debate that followed in both the United States and Canada is fascinating as it resulted in two very different interpretations of what went wrong and how to address the ongoing issue of wildfires in national parks.

Despite significant dissent from the scientific community, policymakers in the United States defined the Yellowstone wildfires as a failure to maintain control over fire.  Canadian policymakers however, defined the problem as the result of a history of suppressing fires in the park, leading to a build-up of deadwood that fuelled the fires, making them much larger than they would have been if fires had been allowed to burn over the years.

Public policy research has shown that problems can be defined in different ways, and those definitions in turn will influence the different policy solutions that may be considered.  For example, if a legislature becomes concerned about a rise in highway fatalities, it may define the problem as texting and driving, likely leading to new policies restricting texting.  If, however, the problem is defined as poor road maintenance, the policy solutions will be focused on road maintenance and repair. 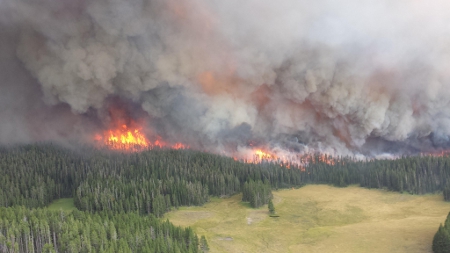 Centuries ago, much of the American West was covered by sparse ponderosa pine forests and fine, high grasses.  This landscape was shaped and maintained by the regular occurrence of fire, as periodic lightning strikes would cause the grass and surface vegetation to burn, sparing the older trees and helping to maintain a fine balance so that neither trees nor grass dominated the landscape.  With the arrival of cattle and sheep in the 1800s heavy grazing changed the landscape, and the tree population increased dramatically. The adherence to aggressive fire suppression policies in Yellowstone National Park until 1971 (lifted somewhat in 1972), had wide ranging effects.  In the absence of fire, ground fuel builds up so that when lightning does inevitably strike, it becomes increasingly likely that the fires will flare up faster, burn hotter and higher, crown into the tall trees and consume entire forests.

The summer of 1988 was one of the hottest and driest seasons in the 116-year history of Yellowstone National Park. Repeated lightning strikes resulted in 248 separate fires, affecting 1 million acres (45 percent of the park).  In keeping with the post 1972 policy, many fires were allowed to burn, however high winds at the end of the summer resulted in stronger fires and fire fighting was expanded. Finally in mid-September the rain and snow came, and the wildfires ended.  In all, the fire destroyed 67 NPS structures, with further damage resulting from the placement of fire camps and helicopter landing zones.  More than 25,000 fire fighters, including 4,000 military personnel were called in to assist, and estimates put the total cost of fighting the wildfires at approximately $120 million

Public outrage over the images of Yellowstone on fire was immediate and the National Park Service was vilified for failing to stop the fires. A Fire Management Policy Review Team was initiated to re-evaluate federal fire policies.  The Review Team reaffirmed the importance of fire on public lands; however it recommended the NPS make changes to better control fire.  The most significant change was the requirement for superintendents to verify and file paperwork that adequate resources are available for fire management for every day that they allow a fire to burn. The present NPS fire policy retains “let-burn” fire zones in principle but heavily emphasizes the protection of lives and property.  The extension of the daily paperwork requirement for burning wildfires has placed an additional burden on park management making it more administratively onerous to allow fires to follow their natural progression. This has led to more suppression that recommended by fire ecologists.

In 1909 the first National Park wardens were hired in Canada, primarily to put out wildfires. In similar fashion to fire management policy in the United States, objectives and procedures in Canada were largely rooted in public perceptions that fire was dangerous and unfavourable to the preservation of wilderness areas. In fact, until the 1970’s fire management and suppression protocols highly mirrored those followed in the U.S. 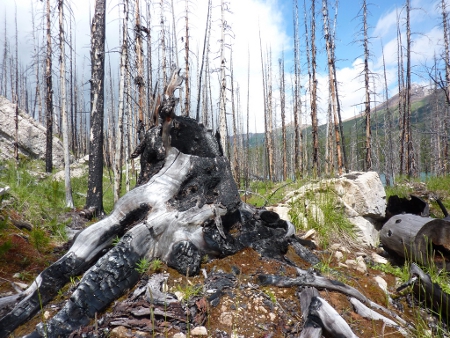 Prior to the Yellowstone wildfires, careerists with Parks Canada argued that the National Parks Service in the United States was creating its own risk by not adopting “let burn” policies, and by not using regular prescribed fires to reduce dry fuel build.  After the wildfires, the agency reviewed its own policies and moved in a more ecological direction.  In 1991, the agency issued new guidelines that called for extensive use of prescribed fires, and the manipulation of natural fires only if absolutely necessary.

In the United States, the wildfires in Yellowstone were defined as a disaster and a human management failure.  In Canada it was defined as a natural event and an ecosystem management failure for not allowing wildfires to burn more, and for failing to use more prescribed burns.  What accounts for this difference in problem definition?  The clearest cause is the differing nature of the two political systems, as shown in Table 1.

In Canada decision-making is highly centralized, while the United States’ separation of powers often means that public policies are open to multiple avenues of influence and must be responsive to a large number of interests and congressional constituencies.  Political control of agency behaviour by elected officials is not only easier, but is used more actively in the American presidential system than in the Canadian parliamentary system. Decision making authority in the NPS has shifted to political appointees within the organization and to federal politicians (who are also heavily influenced by public opinion and interest groups), while in Canada such authority remains with Parks Canada and the Minister of Heritage. Recent years have shown increasing tendencies on the part of American politicians to micro-manage bureaucratic affairs, while Canadian politicians have traditionally stressed deference to public agencies. Interest groups wield more power and influence in the United States than in Canada, and have far more opportunities to become involved in the political process.

Despite the scientific evidence demonstrating the value of fire, politics continues to intervene in national park fire management in the United States.  The summer 2012 Reading Fire in Lussen Volcanic National Park, which was allowed to burn by the National Park Service, escaped control, ultimately burning 28,000 acres at a cost of $15 million.  Congressman Tom McClintock (R) of the 4th District of California commented in a public meeting on the fire:

This article is based on the paper, The Influence of Problem Definitions on Environmental Policy Change:  A Comparative Study of the Yellowstone Wildfires, in the November 2013 issue of Policy Studies Journal.

Shannon K. Orr – Bowling Green State University
Shannon K. Orr is an Associate Professor at the Department of Political Science at Bowling Green State University.  Dr Orr works in the area of environmental policy with particular attention to the tension among competing interests in the policy formation process. Her research includes the areas of national parks policy and climate change negotiations at the United Nations.