In recent decades, neighborhood segregation by race has been on the rise, with many whites leaving areas with increasing minority populations. Eve E. Garrow investigates the effects of this so-called ‘white flight’ on nonprofit services. She finds that as whites leave neighborhoods, this can lead to a fall in the number of local nonprofits. She argues that this may be due to a reduction in an area’s political influence and stakeholder’s perceptions that the neighborhood has become more isolated and prone to neglect.

Given their charitable mission, we expect nonprofit human services to locate in and serve the areas of greatest need.  Why, then, are these organizations often less numerous in poor, minority neighborhoods—localities that often experience the highest needs?  The question is an important one, because if nonprofits are not located in areas of need, citizens are less likely to receive the benefits necessary for their well-being.  This is especially the case in the U.S., where most public human services have been contracted out; making nonprofits the key provider of both publicly and privately funded human services.  In recent research, Sam Garrow (of the University at Albany) and I found evidence that a key mechanism that spatially concentrates minorities in the first place—the re-segregation of minorities through the out-migration of whites—also lowers the density of nonprofit human services in such neighborhoods.

We know that when whites flee integrating neighborhoods they take their financial resources with them, reducing the capacity of the neighborhood to sustain local establishments through private investment or local taxation.  Often, this leads to the collapse of commercial and public sector establishments.  However, we might expect nonprofit human services to be buffered from these forces, since they rely heavily on outside institutional funders such as government and philanthropy, in addition to the financial support of local residents.

Yet, as the dominant group in the U.S. racial hierarchy, whites remove not only material resources but also sociopolitical influence, connections, and legitimacy from the neighborhoods they leave.  We hypothesized that the removal of these forms of support makes it more difficult for nonprofits to survive.  Whites may attract outside resources to their neighborhoods by using their political influence, experience, and expertise to directly impact funding decisions.  Outside donors or funders may view white neighborhoods as more deserving of investment given the high sociopolitical legitimacy of whites, irrespective of the level of neighborhood need. Nonprofits that locate in and serve white neighborhoods may also view racial and ethnic outgroups as less deserving of support, and much like white residents, may leave when the neighborhood begins to integrate.  It is also possible that white flight coupled with poverty create neighborhoods that are unattractive to nonprofit presence because they are exceptionally isolated, marginalized, and prone to neglect and discrimination by institutional stakeholders. 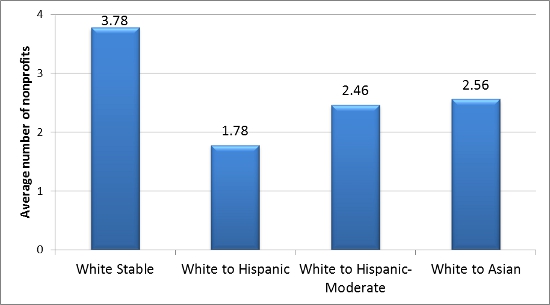 When we examined the change in nonprofits from 2000 to 2011, we similarly found that stable white neighborhoods had greater gains in the number of nonprofits than neighborhoods that experienced white flight.

Does poverty interact with white flight to lower nonprofit numbers?  We found no support for this expectation.  In our analyses, white flight depressed the number of nonprofits regardless of whether the neighborhood was poor.  It seems that white flight creates a hostile environment for remaining nonprofits that reduces their numbers, and that low neighborhood poverty does not buffer organizations from these influences.

Sociologists have noted that residential segregation by race continues to be a means by which whites, as the dominant group, create distance between their group and less advantaged groups, and can hoard advantages that improve life chances and quality of life.  Our findings suggest that the lower presence of nonprofit human service organizations in neighborhoods that have experienced white flight reinforces this form of inequality.  White flight may have important implications for human well-being, as the presence of nonprofit human services can improve life outcomes for resident.

This article is based on the paper, ‘White Flight and the Presence of Neighborhood Nonprofit Organizations: Ethno-racial Transition, Poverty, and Organizational Resources’ in Race and Social Problems.

Eve Garrow- University of Michigan
Eve Garrow is Assistant Professor of Social Work at the University of Michigan. Her research focuses on the implications of privatization of human services for poor and marginalized groups, especially racial minorities, and the commercialization of human services. She has published and presented works on government funding of human services, the role of nonprofit advocacy in promoting social rights, and the risk of client exploitation in nonprofit social enterprises that use clients as labor.