How do voters decide? Do they take everything into account that happened over the government’s time in office? Or do they rely only on the recent past? Timothy Hellwig and Dani M. Marinova report that voters, counter to conventional understandings, are not so short-sighted. Their analysis of vote intentions in the run up to the 2012 presidential election reveals that voters are no more accurate in assessing economic performance over the short term compared to the long term. Voters, it turns out, are more misinformed than short-sighted.

More than any other issue, the state of the national economy consistently figures into voters’ decision at the polls. When economic growth is strong, incumbents tend to be re-elected; when it is sluggish, voters opt for the opposition in the hopes they can turn things around. This much is straightforward.  But what constitutes strong economic performance? A strong economic compared to what? The benchmarks against which we evaluate the health of the economy can influence whether we judge performance as satisfactory or subpar and, in turn, our decision to support the political incumbent.

Consider, for instance, the release of the October 2012 employment report for the US economy and its interpretation in light of the elections that were upcoming. Just a month before President Barack Obama stood for re-election, media outlets gave different spins on the news that the economy had added 171,000 jobs in the previous month. The Washington Post compared employment with that of the previous quarter and concluded optimistically that the economy “is doing better than we thought.” The Wall Street Journal was more critical. Choosing to compare employment to 2008 levels instead, it pointed out that the addition of 171,000 jobs was not enough to drive down the unemployment rate to what it was before Obama took office. Using different benchmarks in time, observers came to opposite interpretations of the same economic statistics.

In a recent study, we examined how different temporal benchmarks matter for how individuals judge the economy and how they vote. We wanted to understand what information citizens retain about economic performance and how they use this information in their decisions as voters. The conventional wisdom is that voters are short-sighted and short-termist. Given the number of demands on their attention, it is too arduous for voters to retain information on economic performance over the course of an entire government term and, thus, performance assessments are based roughly on the year prior to the election.   The importance of the voter’s “time horizon” ranges beyond its implications for the voter’s memory; it also matters for how well citizens can hold their policymakers to account.  A short-termist electorate leaves politicians with little incentive to enact the policies requested by the voters, save the months just ahead of the election.

We re-examined the length of voters’ time horizons through the lens of the 2012 US presidential election. The 2012 election was ideal for our purposes since there was considerable variation in macroeconomic performance since Obama’s inauguration in January 2009. Over the short term, economic growth was sluggish. In the long run, however, it showed significant improvement. The budget deficit also tended in opposite directions, declining in the past year but increasing significantly compared to its 2008 levels. There were also important differences when looking at unemployment and inflation over the short and long terms. Hence, reliance on either short- or long-term evaluations could meaningfully influence the outcome of the election.

Contrary to conventional wisdom, we find no evidence that voters are only concerned about the short term.  That’s the good news.  The bad news, from an informed voter perspective, is that voters were no more knowledgeable about economic developments in the past year than over Obama’s entire term in office. For example, as Figure 1 shows, when asked about unemployment trends, 60 percent in the long-term group were correct while only 47 percent of those in the short-term group got it right. The trends were similar for inflation and the budget deficit. When it came to economic growth, those in the short-term group were more likely to get it right (41 percent) than those in the long-term (28 percent), but the correct response rate was overall low (35 percent).

What are the implications for voter choice? We tested whether or not the vote is informed by short-term evaluations while assessments with respect to the more distant past are discounted. We registered no systematic effect of the time horizon. Voters do not consistently rely on either short-term or long-term evaluations; they use both. This finding runs counter to the received wisdom which holds that voters assess economic performance chiefly based on recent performance.

What might all this mean for the 2016 presidential vote?  At time of writing, Democratic Party strategists are debating whether their party’s eventual candidate—let’s assume it will be Hillary Clinton—should embrace or distance herself from President Obama’s record.  While there may be reason for Secretary Clinton to separate herself from Obama with respect to the administration’s foreign policy record, most economic figures show improvement, especially in recent months.  So if Clinton were to bank on voters’ short memories, this means hitching her wagon to Obama’s economic record.  Results from our study, however, would caution against doing so since voters appear no more likely to inform their decisions based on the past months of data than they are to use information from the entire record, some of which harkens back to less robust economic performance.

This article is based on the paper, ‘More Misinformed than Myopic: Economic Retrospections and the Voter’s Time Horizon’, in Political Behavior.

Posted In: Dani M. Marinova | Elections and party politics across the US | Timothy Hellwig 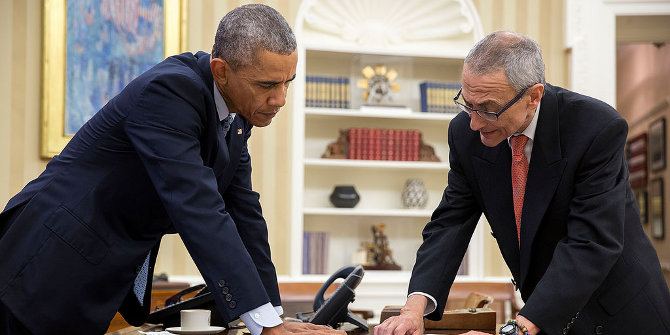