Despite the attention given to presidential candidates every statement and gaffe by the national media, elections can be won and lost by campaign’s field efforts. In new research, Joshua Darr looks at how presidential campaigns can push coverage of their candidates in local newspapers. He finds that the best way for a campaign to earn positive coverage in local news is by targeting smaller newspapers. Those campaigns which did saw four times more positive stories about their candidate compared to those areas where the campaign was not active.

Positive local news coverage can assist campaigns with their election campaign goals of mobilizing supporters, persuading undecided voters, and sending out effective messages. Campaigns’ regional investments help them stage events and make connections with reporters, thus subsidizing the cost of covering the campaign. Journalists want to publish stories that are appealing to readers: unusual stories, stories about famous figures, or—crucially for local newspapers—stories taking place near readers’ homes. Readers trust their local newspaper more than other sources, and information received through trusted media sources is more likely to change opinions and mobilize participation. If campaigns can prompt local journalists to generate appealing stories, those messages will carry the extra trust and credibility that local coverage conveys.

Unfortunately, the economics of news are trending in the opposite direction of the economics of campaign spending. Local newspapers across the country are losing readership, ad revenues, and reporters. Print advertising revenues have fallen by more than half since 2006, classified advertising has decreased by more than two-thirds, and readership has fallen by a fourth since 1990. The total number of reporters employed by local newspapers fell by 40 percent between 2007 and 2015. In their vulnerable state, newspapers are publishing less of the political coverage their readers want.

Not all newspapers are equally disadvantaged, however. Stronger newspapers have the revenues to spend on reporters and in-depth stories resist attempts at influence, while weaker newspapers with fewer resources may find the cost of original reporting on campaigns prohibitive and find it tempting to publish the stories and messages that campaigns create.

A successful earned political media strategy should stimulate the production of additional local coverage that portrays the campaign in a positive light. That coverage should also supply information on how citizens can get involved, should be framed more locally, and contain more quotes from local citizens. For the reasons described above, I expect these indicators of campaign influence—mobilizing information, frame localization, and quotes from local citizens—to be more prevalent in newspapers with fewer resources. In particular, campaigns should find it easier to push positive coverage of their candidate in smaller local newspapers.

In recent research, I examine these dynamics in newspaper stories from the 2004 and 2008 presidential elections by comparing areas with and without a local Democratic presidential field office. Using large and small newspapers (defined as those with circulation above 80,000 and below 55,000, respectively) from areas of the state of Florida with similar partisanship, I classify campaign stories according to their subject, tone, and content. The newspapers sampled are shown in Figure 1 below. 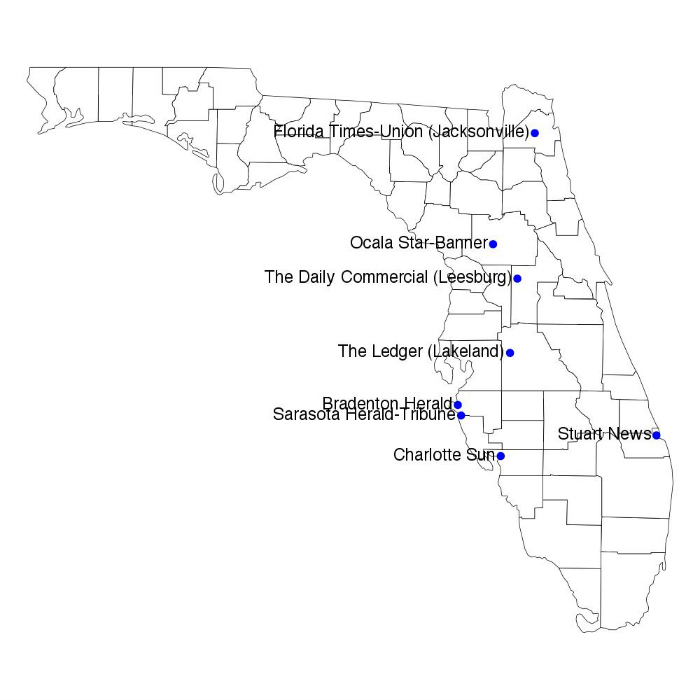 I find that the best way for a campaign to earn positive media in the local news is by targeting smaller newspapers. Four times more positive stories per week were published in small newspapers in areas with campaign presence than in those without it (2.15 vs. 0.48). This substantial effect shows that campaigns can benefit when local media is weak. Without a local hook—often provided by the campaign—local newspapers have little incentive to report on non-local races. Campaigns that target resources to areas with smaller newspapers are rewarded with positive coverage.

Campaigns can push their preferred messaging in small newspapers, but readership of those sources is low overall. Earning positive coverage in high resource newspapers is more difficult, but these newspapers are much more widely read. Campaigns must strategically decide what they value more: their ability to influence tone of coverage, or the number of voters who will read it. For pushing specific messages and generating headlines that can be used in advertisements, smaller newspapers are the best targets. If “all publicity is good publicity,” then focusing on larger sources—even national or cable news, as Donald Trump has done—is the better option.

The implications of these findings are not all grim. Campaigns who want coverage may want to invest in field offices in previously ignored small towns, involving more people in the political process. Small local newspapers give campaigns additional returns on their investment in organization and GOTV activities. Some of the observed effects of local campaign organization on turnout and vote choice may be due to the increase in positive media coverage.

When newspapers parrot campaign messages, however, they contribute less to the overall information Americans use to understand their political choices. Local media coverage should rigorously check campaigns’ claims, countering the constant influence of paid advertisements. The press is supposed to interpret and supplement the messages of political elites, not merely retransmit them. If shrinking local newspapers continue to accept the news they are given, campaigns will find it easier to control the flow of political information through the news media.

This article is based on the paper ‘Presence to Press: How Campaigns Earn Local Media,” in Political Communication.