The 2020 Democratic primary contest has not yet begun, and yet several contenders have already experienced what some commentators have called a ‘surge’, where their polling numbers rise dramatically in a relatively short period of time. Peter Finn and Robert Ledger write that the term is a catch-all which hides a diverse collection of reasons as to why a candidate’s support may increase at the national or state level. Such surges should be read with caution, they advise, as success in certain states or even nationally may still not mean a candidate will clinch the party’s nomination.

Even casual followers of US politics over the last year will likely have been struck by continual discussions of Democratic presidential candidates ‘surging’ in the polls. In July 2019, for instance, California Senator Kamala Harris surged in polls following a strong debate performance, in September Massachusetts Senator Elizabeth Warren surged, whilst former Mayor of South Bend, Indiana, Pete Buttigieg’s much vaunted surge in Iowa in November generated a seemingly endless stream of headlines.

Even early in 2020, we have seen talk of a (Vermont Senator) Bernie Sanders surge, a Tom Steyer surge and discussion of how the large amounts being spent by billionaire candidates like Michael Bloomberg, and Steyer, is leading to shifts in voter preferences by the spending of eye-watering amounts of cash. Slate even publish a weekly email newsletter on the presidential election called The Surge.

Yet, beyond being a continual driver of traffic to news sites via the production of, often over the top headlines, the much vaunted ‘surge’ is actually a catch-all term used as short-hand for a complex group of processes that lead to a rise in the poll numbers of a candidate in a short period.

A diffuse collection of processes

Perhaps the best-known, subsequently lampooned, ‘surge’ primary was for the Republican nomination in 2012 when Rick Santorum, Newt Gingrich, Ron Paul, Rick Perry, Michele Bachmann, Mike Huckabee and Herman Cain all had a brief (or extended) moment in the sun at the top of the opinion polls. Yet, Mitt Romney, who was consistently near the top of the pile and never really had a significant surge, won the nomination.

However, even within a single race surges, generally understood as a rise in the poll numbers of a candidate within a short time period, can occur for a variety of complex reasons. They can, for example, be national or state centric phenomena (either of which may be the result of the actions of a candidate on a national or state stage), or could happen as a new candidate enters the fray and draws supporters away from those already established in the race: especially if a new entrant is a well established player or has deep pockets. Conversely, a surge may arise when a candidate drops out and others seek to pick up their supporters. One explanation for the recent surge of Bernie Sanders, for instance, is that he has picked up Kamala Harris supporters. In another scenario, within a race of established candidates, some may rise as they attempt to coax supporters from their opponents.

A surge can be a short-lived sugar high, with candidates falling back to their prior position relatively quickly or lead to a sustained rise in poll numbers and the establishment of a new equilibrium in a race. The phenomenon can occur at precinct, city, district, state or national level and within intra-party primaries or in races between candidates from opposing parties. Moreover, given that disparities can exist between polls and reality (whether resulting from the under-polling of certain groups, respondents giving false answers or the misreading of what is animating voters in any particular election), it is likely some surges go unnoticed (the ‘if a tree falls in the woods and nobody hears it’ of surges, so to speak). 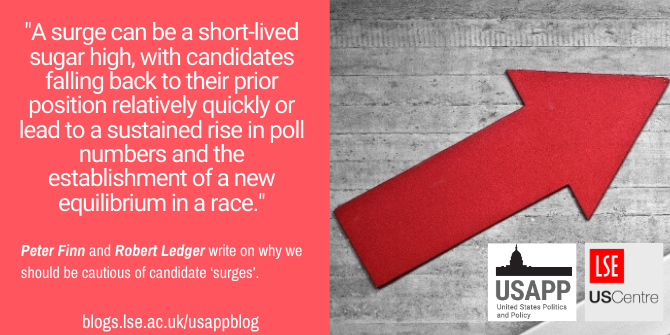 Photo by Stephan Henning on Unsplash

Though this is a far from an exhaustive list of how, when and where a surge can occur, it does start to demonstrate the complex set of processes that are subsumed under discussions of the surge label.

What’s in a surge?

A surge can lead to increased media coverage, which could lead to further support, creating that elusive political currency, momentum. Nevertheless, surges should be read with caution. If the surge is limited within certain states, there is less likelihood that it will translate to the nomination. Pete Buttigieg, for instance, has surged in the early primary states but his candidacy could still be sunk if he cannot take any early momentum to, for instance, Nevada and South Carolina, in subsequent primaries. Likewise, an increase in the overall, nation-wide, ‘horse-race’ polls could be misleading as, essentially, the primary will be won in only select states, with more influence falling to those earlier in the calendar. Seeing a surge in support in New Jersey, for example, (2020 Democratic primary date June 2nd) is probably too late in the election cycle to be consequential.

Candidates behind in the polls can attempt to manufacture a surge in the near term or, kicking the can further down the road, argue they will surge ‘at the right moment’. It might be that some candidates really are playing a long game and have built such future surges into their theory of the case. There is, of course, little point in moving into the top tier of candidates early on in a gruelling race, only to see your stature diminished as other candidates target you. That said, one should certainly maintain cynicism about a candidate with low poll numbers who argues that a surge in support for them is just around the corner. Moreover, as we’ve argued, the processes that can feed into a rise (or fall) in polling numbers are complex and it would be a foolhardy candidate who staked their chances of gaining the presidency (or any other office) on their ability to manufacture a short term surge, let alone a sustained rise in polling numbers in the future.