In the more than six weeks since the 2020 US presidential election, President Trump and the Republican Party have made a number of ultimately unsuccessful attempts to contest President Elect Joe Biden’s victory. Peter Finn, Madison Imiola and Rob Ledger highlight five key events that have happened since the Presidential Election and the convening of the Electoral College this week.

Formally held on November 3rd, though with record numbers voting early in person or by mail in the preceding weeks, the 2020 US Presidential Election saw Joe Biden and Kamala Harris become President Elect and Vice President Elect respectively. The result was confirmed on December 14th, with the convening of the US Electoral College, which saw Electors meet in all 50 state capitals and cast their electoral votes for the Presidential and Vice-Presidential candidates who won their state. In the intervening six weeks, President Donald Trump consistently refused to acknowledge Biden’s victory, lodging lawsuits and questioning the legitimacy of mail-in voting.

Trump calls for votes not to be counted

On the morning after the election, Trump called for the counting of votes to be stopped, continuing a debunked narrative that mail-in votes, or at the least significant proportions of them, were in some way illegitimate. This narrative is a particularly strange one for Trump to perpetuate, given that he votes by mail himself.

Trump said he had won the election because he was ahead before significant numbers of mail-in ballots, a much larger proportion of the votes than in previous years due to COVID-19, had been counted. Trump also claimed that ‘a major fraud’ was taking place, saying he would ‘be going to the U.S. Supreme Court’. In subsequent days, these themes were continued in public statements and tweets calling for those collating mail-in ballots to ‘STOP THE COUNT!’.

With the counting of mail-in ballots in the days after the election, Trump’s lead over Biden dwindled. Biden eventually won the Electoral College by 306 to 232 and the popular vote by over seven million votes. Biden flipped Wisconsin, Michigan, Arizona, Georgia and Pennsylvania, with his victory declared on November 7th. Despite this, Trump continued to question the results, for example tweeting on November 26th when the total number of votes counted for Biden reached 80 million ‘Just saw the vote tabulations. There is NO WAY Biden got 80,000,000 votes!!! This was a 100% RIGGED ELECTION.’

Unsuccessful legal cases were lodged by Trump, and others by his associates or supporters, in Pennsylvania, Michigan, Wisconsin, Arizona, Nevada,  and Georgia, were filed by November 23rd. In a particularly withering Pennsylvania dismissal, Judge Matthew Brann, labelled arguments designed to stop the votes of almost seven million people being counted a ‘Frankenstein’s Monster’. Another ruling in the state noted that ‘calling an election unfair does not make it so’.

Following almost three weeks of failed lawsuits and delay, on November 23rd Emily Murphy of the US General Services Administration (GSA) released over $7 million of funds related to the presidential transition process. This power results from the Presidential Transition Act of 1963 that provides for the GSA ‘to make resources and services available in connection with a presidential transition’. In doing so, Murphy marked the start of the formal transition from Trump to Biden. 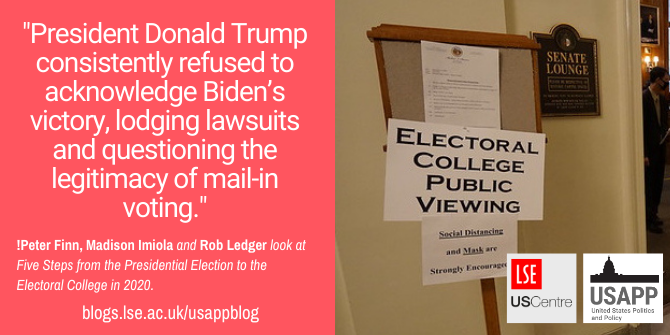 Any lingering thoughts that lawsuits challenging Biden’s victory would be successful were dispelled on December 11th when the US Supreme Court dismissed a case lodged by the Texas Attorney General challenging how elections had been conducted in Georgia, Michigan, Pennsylvania and Wisconsin. The case was dismissed because ‘Texas has not demonstrated a judicially cognizable interest in the manner in which another State conducts its elections.’ The Supreme Court also dismissed other related ‘pending motions […] as moot.’

The 2020 Presidential Election result was formally confirmed on December 14th, with the convening of the Electoral College, an arcane process normally of little interest even to political wonks, that saw Electors from all 50 US states and Washington D.C., though not US territories, vote to confirm the election of Biden and Harris. On January 6th 2021 Congress will hold a joint session to count votes from the Electoral College, whilst Biden will be inaugurated on January 20th 2021.