In The Long Crisis: New York City and the Path to Neoliberalism, Benjamin Holtzman makes an in-depth examination of the 50 year shift to neoliberal governance in America’s biggest city. Glyn Robbins writes that the book’s detailed and balanced discussion of how the city came to embrace private sector solutions to public policy problems is still relevant to today, and to many cities across the globe. 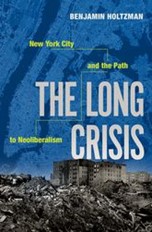 At a time when all cities are struggling to come to terms with a new reality, in The Long Crisis: New York City and the Path to Neoliberalism, Ben Holtzman provides an important and timely analysis of how one of them was transformed by a concerted socio-economic project. New York City’s current crisis may be shaped by COVID-19, but as Holtzman shows, it is defined by a long-term shift towards urban governance based on the neoliberal deification of the market, entailing the dismantling of public services and redefinition of public space.

In a compelling passage, Holtzman relates how a 21st century New Yorker might live in a market-rate condominium that was formerly a rent-regulated apartment, enter the subway through a privately owned “public” atrium, walk down a street policed by private security guards and managed by local businesses, then play basketball in a privately run “public” park. People in many other places will recognise this hegemonic grip of private commercial interests over daily city life.

In The Long Crisis, Ben Holtzman, an Assistant Professor of History at Lehman College of the City University of New York (CUNY) who studies the social and political history of cities, traces the advent of marketized urbanism to the socio-economic crisis of the 1970s when New York City was virtually bankrupt. As rubbish and anxiety piled-up, politicians, policy makers and lobbyists scrambled for solutions. Some, inspired by the likes of the RAND Corporation, advocated “planned shrinkage” of working-class communities of colour like the South Bronx, alongside severe cuts in essential public services.

A wave of arson and abandonment by private landlords led to swathes of the city’s housing becoming uninhabitable. Around 700,000 people were displaced during this “Decade of Fire”, but others got involved in self-help projects to reoccupy and restore derelict apartment buildings. This “urban homesteading” revived a quintessentially American rejection of big-plan bureaucracies and achieved bi-partisan political support, reflected in significant government funding. Thousands of New Yorkers still live in homes that originated from this period, provided by Community Development Corporations (CDCs), analogous to UK housing associations (HAs).

But as Holtzman points out, such agencies can legitimise and hasten the neoliberal agenda of undermining – and ultimately replacing – public services. Critiques from the left accuse CDC’s of shifting “responsibility for providing low-income housing on to the poor themselves (instead of) forcing the government to take over, own and maintain more housing, under tenant control” – a particularly pertinent point with the enormous numbers of empty homes creating new urban wastelands in cities like New York, where speculative property development has run amok. While presented as an alternative to market excess, Holtzman suggests that advocates for the “non-profit” model “helped facilitate New York’s market turn – even when such a sweeping transformation was not their intention.”

In this fashion, 1970s New York City foreshadowed the Third Way Urbanism of the UK’s post-1997 New Labour government and similar administrations in many other countries, when politicians associated with the social democratic/liberal left, became enamoured of private sector solutions to public policy problems. This infatuation with so-called “public-private partnerships” has continued virtually uninterrupted, despite extensive evidence that it doesn’t work.

These issues are highly relevant today, in New York City and beyond. The pandemic has accentuated a pre-existing urban crisis with similarities to the one 50 years ago. I lived in the Bronx for six months last year and saw many of the things Holtzman describes from the 1970s, including litter strewn streets, crumbing roads, creaky public transport, decrepit public parks and a strong sense of abandonment by municipal authorities. With an acute housing emergency in train, the battle to defend what remains of the homes affordable to working class New Yorkers, continues with ever-greater intensity.

But history is also repeating itself in the governmental response. Establishment politicians, like newly elected New York City mayor, Eric Adams, or New York State’s governor, Kathy Hochul, still cling to the belief that there are market solutions to market-driven social problems, while making nebulous appeals to civic participation in urban recovery. Sadly, elements of the non-profit sector that grew out of this broken system, have become increasingly incorporated within it. As Holtzman suggests, this results from a policy deliberately designed to convert “advocacy groups into municipal program administrators, forestalling their agitation for broader economic and political transformation”.

This is a book for what Joe Biden has described as capitalism’s “inflection point”. It is very detailed and balanced, without shying away from some difficult questions about the capacity for charitable, voluntary, and non-governmental agencies to fundamentally address social inequality. While the Biden administration’s efforts to mitigate system failure remain stalled, The Long Crisis describes how such moderate reforms half a century ago, enabled neoliberal capitalism to emerge “from economic calamity stronger and more entrenched in urban life”. To repeat this cycle, with ever-greater public health and environmental threats, would be to court disaster.