Last week, a leaked draft Supreme Court opinion showed that the Court is likely to overturn Roe v. Wade, removing the right to an abortion in the United States. Keith Magee argues that the move, which will have the largest negative impact on poor Black women, may signal that other civil rights, such as same-sex marriage and contraception are also now under threat. He writes that those campaigning for reproductive rights should also march for LGBTQ+, Black, and brown people and other marginalised communities whose rights may now be under threat.

At last, the Democrats are enjoying a much-needed boost. Just last week the party was hobbling towards the midterm elections with an unpopular president and no galvanising message to counter the rising cost of living. Now out of the blue party donations are soaring, and fervent supporters are demonstrating in the streets. What is the single issue that has brought about this turnaround in fortunes where the threat to equal voting rights and the climate emergency have spectacularly failed? Of course, it’s abortion. This is America. It’s always abortion.

Why is a woman’s right to choose still so incredibly divisive? It’s not about religion – I have read my Bible attentively enough to know that is a mere smokescreen. Banning abortion is entirely about something the God I worship would never endorse: subjugation. It’s about the strong desire of a small number of mainly white, mainly male judges and lawmakers to exert power over women by controlling their bodies from the inside. A sense of control, it would appear, is addictive. Once you have it – over people of another opinion, another sex, another race – it is hard to give it up. It is even harder to tolerate having it snatched away from you. Just look how well the southern states took it when we stopped them from keeping slaves.

As ever, it is Black bodies that will pay the highest price in this hideous power game. Non-Hispanic Black women, who are already among the most deprived American citizens because of systemic racism, undergo more legal abortions than any other ethnic group. As the Centres for Disease Control’s latest Surveillance Data for Abortion report recognizes, this is due to a complex range of structural factors, including ‘unequal access to quality family planning services, economic disadvantage, and distrust of the medical system.’ Those same factors – all rooted in racial injustice – mean poor Black women are also the least likely to be able to afford to travel to another state for an abortion, the least likely to be able to meet the high medical costs associated with carrying a baby to term and giving birth, and by far the most likely to die from the complications of both.

If the conservatives who dominate the Supreme Court do – as the leaked draft opinion by Justice Alito suggests they will – soon overturn Roe v. Wade, they and their puppet masters will not be satisfied with subjugating millions of women by preventing them from accessing safe abortions. In the document, Alito attempts to gaslight the nation by first asserting that Roe v. Wade erroneously grounded abortion rights in privacy and then claiming that the court does not have in its sights other rights that were granted on the same basis, such as the rights to use contraception, to engage in private, consensual sexual acts, and to enter a same-sex marriage. Intolerant misinterpretations of scripture have previously been used to justify the denial of all these rights too, and there can be no doubt that a return to those dark days is next on the conservatives’ agenda. And just as they clearly signalled their disdain for reproductive rights before this bombshell draft opinion was leaked, as I wrote here in March the GOP are making no attempts to hide the fact that they don’t like Black and brown people being able to vote either. In this fall’s midterm elections, extreme conservatives are coming for civil rights too. We must start believing them when they tell us – as Justice Alito openly does at many points in his document – that they want to drag US society back to the 19th century. 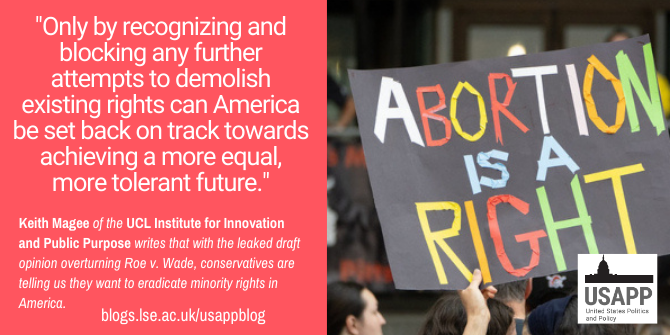 Over the next few weeks and months, we must keep every endangered right at the forefront of our minds. Opinion polls consistently show that most Americans are against overturning Roe v. Wade; Democrats will, wisely, seize the opportunity to gain support among those who might naturally vote Republican, are independent, or are apathetic, but do not want to see abortion banned. However, liberals must beware of trying to win the battle over abortion at the risk of losing the war for broader rights. All marginalized groups – not just women – and their allies must be called upon to come together now to protect each other’s rights and their own, while they still have them.

Americans who are planning to go out and march to protest attempts to rob them or their sisters or daughters of their reproductive rights should also march for their LGBTQ+ friends and fellow citizens. They should march for those who are Black or brown. They should march for all those who are in any way marginalized and who are considerably more frightened now than they were before Justice Alito’s draft opinion mysteriously escaped the confines of the Supreme Court. It is imperative to protect every American’s right to choose what they do with their own body, who they sleep with, who they marry, how many children they have and when, and whether they participate in fair democratic elections. In other words, their right to be free from subjugation.

Only by recognizing and blocking any further attempts to demolish existing rights can America be set back on track towards achieving a more equal, more tolerant future. Failure to act will turn the United States into an undeveloping nation – with dire consequences for its position as a role model for democracies and would-be democracies around the world – and we won’t be able to say the GOP didn’t warn us. If the threat to all minority rights suddenly feels real, it’s because it is.

Keith Magee – UCL Institute for Innovation and Public Purpose
The Reverend Professor Keith Magee Th.D., FRHistS, FRSA The Reverend Professor Keith Magee Th.D., FRHistS, FRSA is Visiting Professor of Practice in Cultural Justice at UCL Institute for Innovation and Public Purpose (IIPP). He’s maintained a role as Senior Fellow within UCL Cultural Engagement, where he’s led Black Britain and Beyond a social platform and think-tank. He is also a Fellow at UCL Centre on U.S. Politics (CUSP). Equally, he is Professor of Practice in Social Justice at Newcastle University. Noted a public intellectual, Magee has a professional career of over three decades in public theology, public policy, and political affairs all leading to social justice. The Biden-Harris Administration’s US Ambassador to the Court of St James’s has appointed him to the U.S. – U.K. Fulbright Commission, having served on the Biden 2020 President Campaign’s African American Kitchen Cabinet. Previously, he served as a Senior Religious Affairs Advisor with the Obama-Biden for America in 2008 and 2012.