Risks to children online are increasingly problematic. Is the new internet Safety Strategy the solution?

Risks to children online are increasingly problematic. Is the new internet Safety Strategy the solution?

The recent announcement of a new Internet Safety Strategy for the UK offers much to be welcomed. It proposes, in brief:

While there are continuities with the 2009 Internet Safety Strategy, sustaining and extending the Strategy to encompass the entire UK population, not just children, is surely valuable. One hopes, too, that the proposed social media code of practice will result in more compliance than the current UKCCIS social media guide – although while codes are stronger than guides, much will depend on effective compliance mechanisms.

Why is all this needed? A growing body evidence on children’s experiences of online risk of harm indicates the need for decisive and coordinated government action. On behalf of the UK Council for Child Internet Safety (UKCCIS) Evidence Group, my colleagues and I were commissioned by DCMS to review the recent, relevant, UK-based research on children’s online risks and safety to inform the strategy. Our key findings included:

Children’s age and gender, digital literacy and resilience all affect their online experiences and wellbeing outcomes. Thus it is important that the UK’s new Internet Safety Strategy guides industry, schools and parents so as to be responsive to children’s diverse needs and rights, empowering them as well as protecting them in the digital environment in ways that are informed by robust and specific evidence of which risks lead to harm, for whom and under which circumstances, as well as of which interventions work best. My co-authors commented that:

“Our review highlights new areas of online risk specifically around illegal use of the Internet. Recent research suggests that young people are not always aware that their online behaviour crosses legal boundaries particularly in respect of hacking and other forms of cybercrime.” (Julia Davidson, Professor of Criminology at Middlesex University)

“Our work also suggests that it is important for the new strategy to address the ways in which young people may be vulnerable to cyberbullying on the basis of gender and gender identity, sexual orientation, race and religion or belief, as well as disability status.” (Dr Joanne Bryce, Senior Lecturer at the School of Psychology, University of Central Lancashire)

It’s good to see that the Strategy document includes a detailed Annex closely based on the findings of our review. Next, however, is the task of mapping the specific research findings onto the proposals in the Strategy, to figure out where and how evidence can guide their implementation effectively. This will be impeded, unfortunately, by the fact that our review also identified lots of evidence gaps – research funding simply isn’t keeping up with the changing array of risks facing children. So we found little, for example, on the risk of online radicalisation, despite public anxiety on this topic.

Most media attention for the new Strategy focused on the implications for industry regulation rather than, say, the renewed support for digital literacy education (which many have long called for and which is hardly controversial, although the specifics remain to be worked out). On industry regulation, however, if the media response is anything to go by, the struggle is far from over:

As the tech giants increasingly act – or may be required to act – more as publishers than platforms, by moderating, editorialising and banning content, this raises new concerns. For society neither wishes companies to escape responsibility nor to take responsibility in an unaccountable way, led by commercial rather than the public interest. Hence the importance of independent or regulatory oversight. As The Spectator put it, “it is time for a parliamentary debate on laying out and limiting the powers that politicians ought to have over the new digital publishing houses.”

The Green Paper does not propose an independent ombudsman or children’s digital champion (as called for by the House of Lords’ report, Growing up with the internet). Noting, however, that “There can be no real accountability without transparency”, CHIS Secretary John Carr predicts that voluntary compliance will fail and legislation must be on the cards. We’ll see.

Of the various reasons why it’s now imperative that industry provision is, by whichever means, made child-friendly (or, at least, not child-exploitative), my main concern is that the less responsibility industry takes, the more falls to children (and their parents and teachers) to figure out for themselves. Faced with an increasingly complex, often opaque and illegible digital environment, the burden on children to anticipate and cope with online risks is often too great. Digital media education cannot prepare all children, from any age and from all backgrounds, for some of the risks the internet industry serves up to them.

Reflecting, then, on the Government’s ambition, as the Secretary of State announced, to make Britain “the safest place in the world to be online”, crucial will be managing the mix of stakeholder efforts – including parents, teachers, regulators and industry. Also crucial will be the resources put in place for independent, regular monitoring and evaluation of what’s working and what isn’t. Finally, we must ensure that in making children safe online, we do not implement an overly protectionist approach that unduly undermines their online opportunities to explore, experiment, learn and express themselves. For that would be to lose sight of the bigger prize. 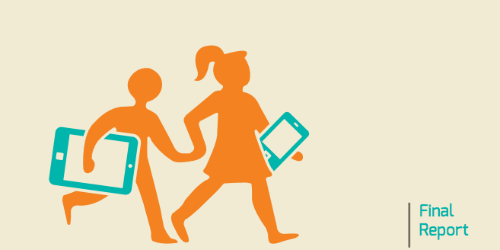