The independence referendum in Scotland played a decisive role in galvanising support for the SNP and leading many Labour voters to abandon ship. In this article, Eric Shaw reflects on Labour’s predicament in Scotland.

Arriving to the leadership a few short months ago, Jim Murphy knew he had a tough fight on his hands to save as many of Labour’s 41 Scottish seats as he could. He could not have known how tough it would be. If the polls are right, Labour seats will fall like scuttle, its West Central belt, its bastion for almost a century, disintegrating. How could it all have gone so wrong?

The short answer is that nobody really knows. So what follows are a series of reflections, speculations and conjectures: we will have to await further research before more solid conclusions can be drawn.

It is worth distinguishing between two processes here: the weakening of allegiance to the Labour party and the decision to desert it. Holyrood elections have shown a slow, though steady and incremental, fall in the percentage of the electorate opting for Labour – a process which suddenly accelerated in the 2011 ballot. At the same time the Labour vote in Westminster elections held up, impressively so in 2010. It became received wisdom that voters invoked different decisional criteria when making their choice at the two levels of government. With the advantage of hindsight it seems that Holyrood may well have been a truer representation of partisan loyalty with voters returning to Labour in UK elections simply to keep the Tories out. Now they fell they no longer have to.

Labour has been beguiled by the myths of the ‘core vote’ and its ‘heartlands’ for too long. For a range of generally familiar reasons – partisan and class dealignment, the shrinkage of the manufacturing sector and  of larger-scale workplaces, the weakening of trade unionism, the contraction of council house tenancies and so forth – the organisational and sociological mechanisms that bound large sections of the Scottish population to Labour have corroded. None of this meant that voters would quit Labour, simply that they felt less affiliation with it. The next step, facilitated by the first, was to abandon ship. And it now seems that the referendum campaign played a decisive role here.

The impact of the referendum campaign

The union survived the referendum vote intact but the impact of the campaign was unexpected. Rather than deflating, the morale of the ‘Yes’ campaigners rose it with many feeling that a strategic victory had been won. What occurred during the campaign was a mass mobilisation of the movement for independence which in its wake a galvanised support for the SNP, and this has persisted.

Another point is worth making here. Whereas the decisive considerations swaying ‘No’ voters were pragmatic – in particular the economic sustainability of a separate Scotland – the ‘Yes’ camp mobilised forces of identity, emotion and pride all of which fed into a mass mobilisation of enthusiasm for independence. This in turn seems to have forged ties of allegiance to the Nationalists much stronger than those that underpin support for Labour, helped by the mass localised campaigning which the pro-independence camp launched and which appeared to have reached an impressive number of voters.

The SNP’s strategy for Westminster was greatly aided by an egregious Labour strategic error – to team up with the Tories (and the Lib Dems) to form Better Together. This played right into the SNP’s hand, which was seeking to portray Labour as too close to the Tories and too willing to sacrifice its principles.

A key aspect for political campaigning is staking out the terrain. What are the issues at odds between the parties? Labour’s dilemma here is that, independence aside (and the issue has hardly figured in the Westminster campaign), there is little in terms of broad policy-stances, values and goals to separate the two parties. This is classic ‘valence’ territory. Valence theory contends that where parties are not divided over broad principles then voters will look to ‘performance issues’. Who has the better leadership? Who seems most likely to be able to deliver agreed goals? Who is more competent? And, for Scotland of particular significance, who can best be relied on to defend Scottish interests?

Labour’s problem is that the SNP outscores it on all these matters. It may well be that the loss of support for Scottish Labour is to some significant degree a backwash of the problems assailing the national party, notably the poor perceptions of Miliband’s leadership and of Labour’s economic competence. There were hopes that Murphy’s accession to the leadership would help: he is a shrewd, adroit politician and a highly effective communicator. But it did not, partly because Nicola Sturgeon proved an unexpectedly formidable successor to Alex Salmond, and partly because Murphy has been unable to strike the right note (his insertion of the word ‘patriotic’ into the party’s constitution is a case in point).

Labour’s predicament is that it is fighting a war on two fronts. In England it has sought to narrow the gap between itself and the Tories on the all-important issue of economic competence by projecting itself as the party of ‘fiscal responsibility’ and ‘discipline’, tying itself to some of the coalition’s fiscal targets. This means, as the SNP has been swift to point out, cuts, in Scotland and elsewhere, fueling its charge that Labour is ‘austerity-lite’. Labour’s response has been that ‘full fiscal autonomy’ an SNP goal, would lead to heavy revenue losses for Scotland. The claim is supported by the Institute of Fiscal Studies but, frankly, all this is lost on most voters.

The key component in Scottish Labour’s strategy is that by opting for the SNP voters are effectively handing over the reins of office to the Tories. There is some truth in this, but only some. The SNP’s riposte had been to stress their willingness to sustain a minority Labour government in office – which at time of writing seems the most likely outcome of the election.

The polls are suggesting that the SNP scythe might cut down virtually all of Labour’s Scottish seats leaving no more than a rump of survivors. Seats with towering Labour majorities are now marginals. A major historical landmark, something over which both scholars and practitioners will pore over for years, seems likely to be in the offing. There may be in the last three weeks some narrowing of the gap between Labour and the SNP. Perhaps residual loyalties will re-assert themselves and the hard work and high reputation of some of Labour’s MPs come to their rescue. One thing is for sure: the political and electoral topography of Scotland will be transformed on May 7.

Eric Shaw is Senior Lecturer in Politics at the University of Stirling and author (along with Gerry Hassan) of Strange Death of Labour in Scotland. 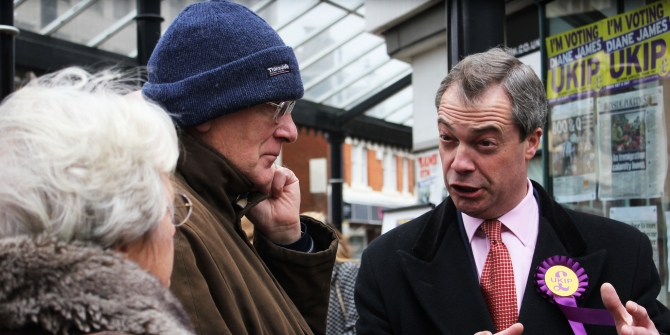 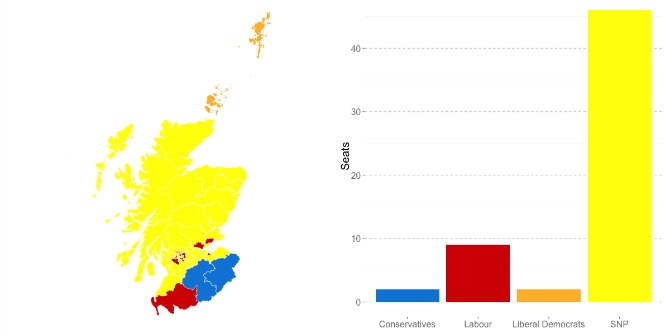