Libby McEnhill argues that it is wrong to see Cameron’s ‘One Nation’ Conservatism and Thatcherite Conservatism as though they represent opposites in their approaches to welfare and the role and responsibilities of the state. In essence, both see danger in an expanded state and share the same ideological foundations.

This post responds to and builds on two recent posts on this blog on Conservative Party social policy under David Cameron. Pete Redford claimed that the Conservative leader has ‘shift[ed] back to the traditional right’ from a more centrist approach since 2005, while Judi Atkins illustrated how Cameron’s ‘Big Society’ is an ideologically Thatcherite project. Here I argue that a change of rhetoric on welfare should not be mistaken for a change of ideas. Explicit notions of ‘Compassionate Conservatism’ have been shelved but the ideological perspectives underpinning the Conservatives’ approach to welfare have been consistent under Cameron’s leadership. While comparisons with Thatcherism are accurate, Cameron’s approach should be understood in relation to postwar Conservatism as a whole.

‘There is such a thing as society…’

Rhetorically, the Conservative Party has undergone something of a U-turn regarding welfare under Cameron. In 2005, shedding the ‘nasty party’ image that the party acquired under Thatcher and struggled to shake off was prioritised. Cameron initially aligned himself with the other postwar Conservative strand, ‘One Nation’, indicating a compassionate approach to social policy issues. After 2007 however (following the financial crisis), conventional worries about public spending began to creep in. In coalition government, the Conservative Party has sought to slash welfare spending, justifying this via a moral critique of the welfare state and recipients. This utilises the language of ‘individual responsibility’ as remedy to ‘welfare dependency’ leading to comparisons with Thatcherism. The impression is of inconsistency: a flirtation with ‘One Nation’ politics in opposition, dwindling away to reveal a Thatcherite core – the ‘same old Tories‘ – in government. Such an impression is deceptive.

‘…It’s just not the same thing as the state.’

It is easy to overstate the extent of policy change between 2005 and now. The recommendations of the Social Justice Policy Group in 2006 illustrate this. Entrusted to Duncan Smith’s think-tank, the Centre for Social Justice, Breakdown Britain and Breakthrough Britain have been highly influential in the development of welfare policy. These developed criticism of New Labour’s over-reliance on state-led welfare and of the ‘poverty of aspiration’ caused by such initiatives; of their cost, ineffectiveness and inefficiency; of the sidelining of community and voluntary initiatives; of the problems of measuring poverty against an ‘arbitrary’ measure of income. Such criticism is strongly stated in these early recommendations. They illustrate the underlying principals that the have been translated into policy in the Welfare Reform Bill 2012. They are now justified through a language of ‘scrounging’ and the irresponsibility of claimants rather than the more lenient, compassionate tone taken in the years immediately after Cameron assumed the leadership. However, the ideological assumptions underpinning these recommendations reflect an established and consistent approach to welfare in the Conservative Party, based on a deep-rooted suspicion of the large state that has its roots in the party’s postwar history. Although electoral expediency has shifted the language, the principals and many policy proposals remain intact. Cameron’s support for the welfare state has always been qualified by the claim that extensive reform is needed.

In relating Cameron’s leadership to other Conservative postwar traditions, it is a mistake to present One Nation Conservatism and Thatcherite Conservatism as though they represent opposites in their approaches to welfare and the role and responsibilities of the state. One Nation Conservatism can be portrayed as a sort of left-wing, progressive movement that was rejected by Thatcher for acquiesing to Labour’s ‘turns to the left‘ over the postwar years. The implication is that Thatcher came into a party that was comfortable with ‘big state’ social policy and (depending on who you ask) either hijacked its entire ethos and introduced a hitherto unheard of ideological angle to its politics, or wrestled it back from socialism and continued electoral and governing failure.

Either scenario is unfeasible. There is not as much distance between the One Nation and Thatcherite traditions as is sometimes assumed with regard to welfare policy. Any comparison to Thatcherism is also a comparison to One Nation, and to consistent Conservative ideological principals that are more or less strongly stated depending on electoral and governing context. If one can accept the overwhelming popularity of the welfare state for much of the post-war period, then it seems reasonable to assert that at least some of the Conservative Party’s ‘acceptance’ of its expansion was down to electoral necessity. This was simply not the time to be advocating ‘rolling back the state’. However, in 1979 it was expedient for Thatcher to distance the Conservatives from the apparently ‘broken’ post-war consensus, particularly following the Winter of Discontent. Tensions that had been growing within the party for several years could now be expressed: tensions that, in many instances, were related to the effect of an expansive welfare state on society. This led to the now-familiar theme of ‘welfare dependency’ and the dangers of encouraging this, with Thatcher claiming that such a state ‘drains society, not only of its wealth but of initiative, of energy, the will to improve and innovate […]’

Just as the Conservative Party did not ‘flip’ from One Nation to Thatcherism at some point in the 1970s, neither has Cameron done so in relation to welfare policy. One Nation and Thatcherite Conservatism are sides of the same coin, seeing danger in an expanded state. Therefore any comparison with Thatcherism is an acknowledgement of continuity in the broader post-war Conservative tradition. A parallel can, however, be drawn between the  treatment of welfare in relation to electoral strategy. In 2005 the Conservative Party sought to move in on New Labour’s voters. At this point, cutting public spending or drastically trimming the state were not what it was thought those voters wanted. After 2007 and the financial crisis, the Party was able to construct a much more forceful narrative around the morally and financially unaffordable nature of welfare spending that was more in tune with Thatcherite rhetoric of self-reliance and the  limitation of government involvement in social life. Despite this shift of rhetoric, the ideological foundations have remained broadly consistent throughout.

Libby McEnhill is a PhD student at the University of Huddersfield researching Conservative Party welfare policy and ideology under David Cameron. 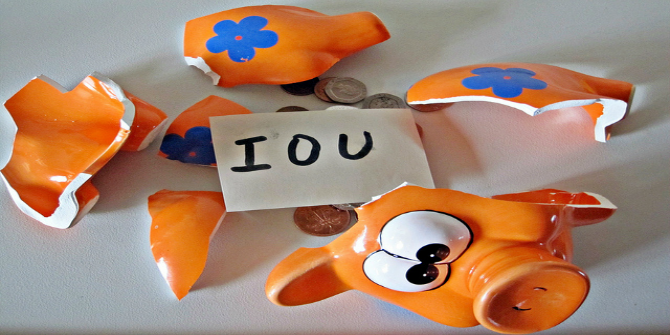