Government today is trying to create a ‘system’ of devolution from a legacy formed of a tacit constitution and Thatcherite centralism, explains Michael Moran.

Devolution – whether to the Celtic nations or within England – has many faces and raises many issues – of economy, identity and political strategy. But it is worth remembering that fundamentally it is a constitutional issue – a problem, in particular, of the territorial constitution.

Before any reader switches off at the sight of that word ‘constitution’ it is worth stressing that constitutions are significant well beyond the lives of dry as dust lawyers and scholars. They have a two-fold importance in the lives of the nations that make up the United Kingdom: constitutions are the means by which we affirm, or decline to affirm, our attachment to the political order, whether to the ‘United’ Kingdom or to some other creation; and they perform the bread and butter job of trying to prescribe the everyday institutional rules that govern our political life.

Changes to the territorial constitution – whether in the form of nationally delimited systems of devolution, or in the form of the proposals around a ‘Northern Powerhouse’ – are best seen in the light of the history of the territorial constitution: of the legacies it has bequeathed to us now, and the problems it has landed on our doorsteps. Mr Osborne, in attempting to rewrite the constitution – which is what in principle he is attempting – is not writing on a clean slate: he is trying to cope with those legacies.

The constitutional understandings with which Mr Osborne is now struggling reflect, obviously, a long history. But a good beginning is 1922 when – just for once in a very short period of time – a new constitutional order was quite suddenly created. It came at the end of a fifty year period of constitutional uproar centred on the demand for ‘home rule all round’: for extensive devolution to all the Celtic parts of the British Isles.

Anyone predicting our constitutional future on the eve of the First World War would probably have expected that a ‘home rule all round’ constitution was the future. It wasn’t. By 1922 we got, instead, a Unionist constitution: one based on the supremacy of the Westminster Parliament, and the domination of ‘British’ institutions centred on the London metropolis.

This unexpected outcome had many causes. Irish secession fatally weakened the home rule movement. The newly powerful Labour movement after 1918 calculated, probably rightly, that the best future lay in big British battalions rather than in Celtic separatisms. As David Howell says in his book A Lost Left: “From some point in the 1920s, most Socialists within Britain were also British Socialists.” He might well have added ‘and were also Unionists.’ A hegemonic constitutional ideology of Unionism – of the legal and cultural supremacy of British Unionist institutions – united the Conservatives, who actually called themselves Unionists, with almost everyone else.

That constitution was memorably anatomised in Jim Bulpitt’s masterpiece, Territory and Power in the United Kingdom. It was a dual polity based on a tacit understanding: a division between the high politics of the metropolitan elite and the low politics of local government. And Bulpitt’s book was published at just the moment – 1983 – when the tacit understanding broke down. It broke down because local autonomy was incompatible with the imperatives of Thatcherism, the great modernising ideology of British politics in the 20th century.

Thatcherism destroyed not only local autonomy, it also tried to replace the ‘tacit understandings which are not always understood’ by a system of explicit legal controls from the centre. And in trying to solve one set of problems – how to modernise British government and society in the face of national decline – it bequeathed a new set of pathologies with which Mr Osborne is struggling. It turned the ‘tacit understandings’ of central-local relations into a perpetual legal battlefield. It turned the financing of local government into one of the most politically dangerous issues of the age – capable, as witness the poll tax, of creating monumental policy fiascos and destroying some of the very foundations of Conservative Unionism in Scotland. It forced metropolitan politicians into micro management of most prosaic details of local administration.

In seeking to unravel all this Mr Osborne – and Mr Cameron – is facing an unpleasant, familiar, truth: you can turn an aquarium into fish soup; you can’t turn the fish soup back into an aquarium. The Thatcher Revolution made fish soup of the old decentralised dual polity. We can see Mr Cameron and Mr Osborne trying to make sense of the resulting constitutional dish.

Mr Cameron’s pet project of English votes for English laws is based on a fiction: that after nearly a century of Unionism there can be any such thing as a distinctive ‘English’ law. And Mr Osborne’s Northern Powerhouses are equally fictitious – not just fictitious as economic projects, as my colleague Karel Williams makes clear in an accompanying blog, but fictitious as exercises in the creation of regional identity.

Shrewd operators in Manchester are, rightly, happy to exploit the idea to see what they can squeeze out of the Treasury; but as is shown by the squabbles over what other regions might be created, and by the pursuit of the will o the wisp of mayoral leadership, a century of Britishness has left England bereft of meaningful regional identities as foundations for a new constitutional order.

Note: This article was originally published on the Manchester Policy blog.

Michael Moran is Professor of government at Manchester Business School and a member of CRESC (The Centre for Research on Socio-Cultural Change), 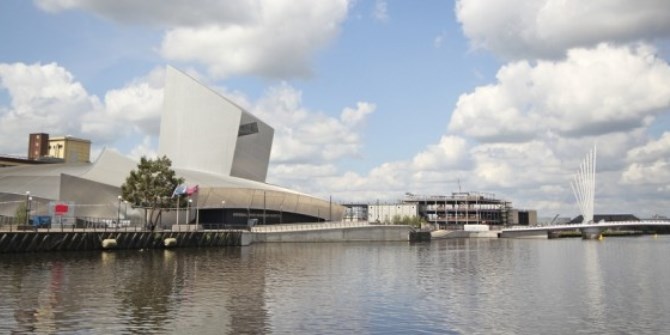 Tractors, coups and ugly habits: Top 5 blogs you might have missed this week