The government’s grammar schools plans have been covered widely. In contrast, plans to change the funding system for nurseries and pre-schools have received little attention. But these reforms actually pose a greater threat to social mobility than proposals to expand grammar schools, argue Kitty Stewart and Ludovica Gambaro.

Social mobility has been in the news in recent weeks. Announcing government plans to allow the expansion of selective secondary schools, Prime Minister Theresa May argued that “This is about being unapologetic for our belief in social mobility and making this country a true meritocracy, a country that works for everyone.” In response, academics, think tanks and even Conservative politicians have lined up to present the evidence that in practice, academic selection increases educational inequality, and strengthens the relationship between social background and attainment.

Meanwhile, however, the Department for Education (DfE) has been quietly consulting on their plans to change the system of funding for early education. In sharp contrast to the extensive coverage devoted to the grammar school debate, the proposed introduction of a national early years funding formula has received little attention. The proposal will mean radical changes to the funding nursery providers receive, and sharp funding cuts for many state nursery schools and classes. Given the role early education can play in leveling the playing field between different children as they start school, the damage to social mobility is likely to be at least as great as that caused by a small increase in the number of grammar schools. 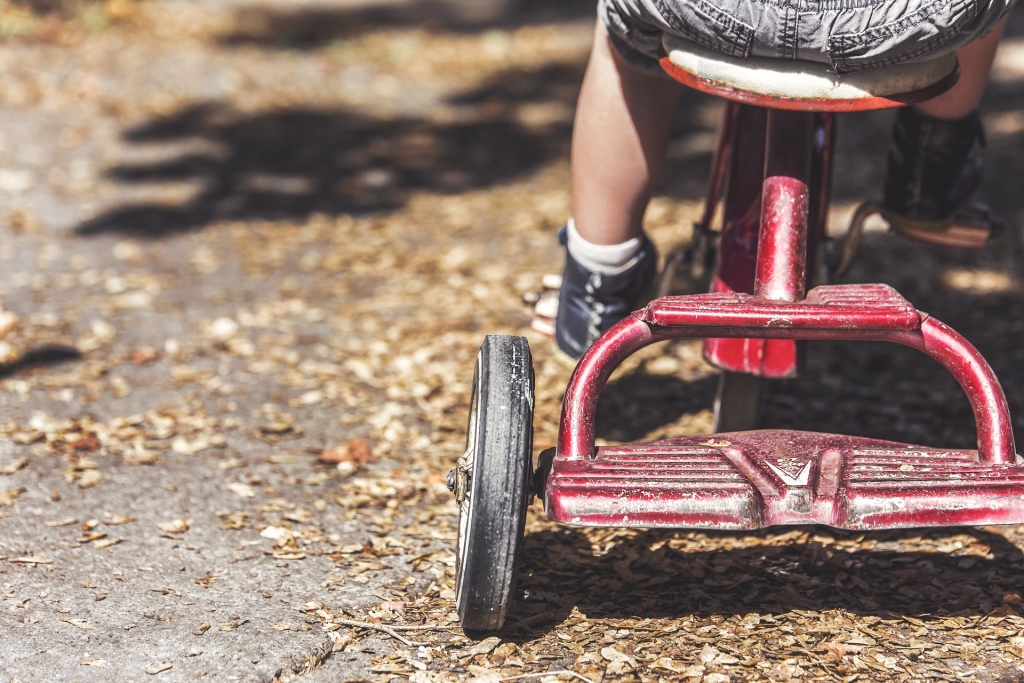 There are two main planks to the funding reform. First, the way that funding is allocated from central government to local authorities will be reshaped. The new system aims to give all areas the same amount per-child, adjusted for additional needs (such as low income and disability), and for the cost of provision in different parts of the country.

On the surface, the idea of such a formula seems sensible and fair. In practice, at least one quarter of authorities will lose out, and the DfE present no analysis of which these are and what the effects on different groups of children might be (though see here for recent work examining the changes by LSE colleagues). Further, the resulting allocations are just as varied and at least as arbitrary as in the current system, driven in large part by the “area costs adjustment”, which is based on regional labour costs and on average local land values. This ensures that providers in more expensive areas will receive more, regardless of the actual costs they face.

The second issue, and the more worrying one, is that local authorities will face new controls on how they allocate funds. Crucially, they will be forced to channel 90 per cent of funds through a universal per-child base rate which must be the same for all settings. Though they can add small supplements to support settings which offer flexibility or ‘efficiency’, or which have higher numbers of disadvantaged children, they will not be allowed to have supplements for quality (such as to support the costs of more highly qualified staff). In addition, authorities will be required to pass on at least 95 per cent of their funding allocation directly to providers to cover the cost of statutory hours.

The problems with proposed reforms

The significance of these restrictions cannot be overstated. Currently, one third of three-year-olds (and more four-year-olds) access their free place in a nursery school or a nursery class in a primary school, where each class is headed by a qualified teacher; something that evidence suggests makes a significant difference to the quality of provision, and hence to child development. Other children attend private or voluntary sector day nurseries or pre-schools, which are much less likely to have a graduate presence in the classroom. In January 2016 only half of all three- and four-year-olds in these sectors had contact with a qualified graduate at any point in their week (and that might not be on a daily basis).

Importantly, state nursery schools and school nursery classes are most heavily concentrated in inner city areas, and this has led to something quite rare: a socio-economic gradient skewed in favour of disadvantaged children. As Figure 1 shows, in 2011 around 80 per cent of three-year-olds from the most disadvantaged areas (on the far right) attended a setting with a qualified teacher or Early Years Professional, compared to only 50 per cent of children from the least disadvantaged areas (the far left). This is a good news story from a social mobility perspective. 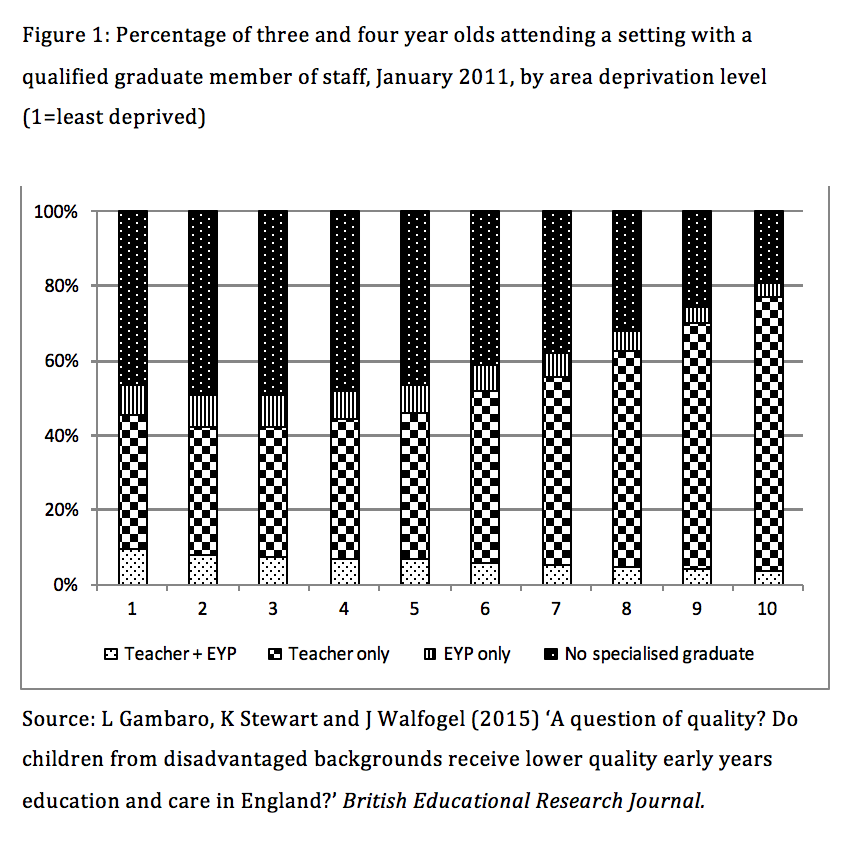 The new funding restrictions represent a major threat to this picture, because they put the quality of provision at risk. If all settings must be funded at the same rate, with no additional support for qualified staff, it is difficult to see how school nurseries will continue to afford teachers. Schools will either need to reallocate funds from the main school budget, or (as seems increasingly likely, given the wider squeeze on education funding), they will need to change the status of the school nursery, contracting out to a voluntary provider, thereby avoiding the requirement to have a qualified teacher in place.

This would be a terrible step backwards for these settings and the children that attend them. For standalone nursery schools, which cater for only 4 per cent of three-year-olds, while holding a reputation for being among the highest quality providers in the country, the threat is most severe. The Department for Education has promised to maintain their funding for at least two years “to keep their transition to a universal base rate manageable”. What happens after two years is not clear.

The absence of a quality supplement will also make it difficult for private and voluntary sector settings to improve staff qualifications. Evidence from both New Zealand and the US points to the role dedicated funding for quality can play in giving providers the ability and incentive to train or take on more highly skilled staff. The UK’s Graduate Leader Fund (2008-2011) provided financial support for early years providers to pay for the training and wage costs of Early Years Professionals, leading to significant increases in the graduate workforce. Some authorities chose to maintain their own such funds after the national fund was discontinued. The ruling out of quality supplements explicitly prevents them from continuing to do so.

The requirement to pass on 95 per cent of funds directly to providers adds an additional blow to the ability of local authorities to deliver the best possible provision to the children that need it most. Many local authorities are currently using “retained” funds for a range of valuable activities.

One of these is ongoing professional development and support. Removing this support seems risky and short-sighted, and will also have consequences for the workforce. Local authority early years teams will inevitably shrink, wiping out middle and higher professional roles, which in turn is likely to make the sector less attractive, as there will be less room for career progression.

Another use of “retained” funds is to provide a full school day to three and four year olds whose home circumstances mean they stand to benefit from additional hours beyond the statutory 15 hours a week. Hackney currently does this for children with several siblings under five, children from families on maximum benefits, and those with special educational needs. Now these longer day places will only be available to children of working parents.

And here we come to the driving force behind the funding reforms. In the last general election, the Conservatives made a commitment to extending the free entitlement from 15 hours to 30 hours for children whose parents are working. It turned out that this is easier said than done. Hourly funding rates for the 15 hours are widely considered to be inadequate, and the private and voluntary sector nurseries which deliver a large share of provision manage the situation by cross-subsidising – essentially, charging working parents who need a full day’s care higher rates for the additional hours they use.

With 30 free hours, this strategy becomes unviable. Nurseries will not be able to deliver the 30 hours and survive unless the government puts substantially more money into the policy than they had anticipated. Hence the motivation for the new formula, which will plug some of the gap by raiding funds from the state nurseries attended by many of the most disadvantaged children, and by restricting children from non-working households to a maximum of 15 free hours per week. This is despite the fact that these children stand to gain most from early education. Meanwhile, analysis has shown that the largest financial benefit of the 30 hours policy will go to the highest income families.

It’s hard to get people very excited about funding formulae. But if we are concerned about social mobility and children’s life chances, the new early years funding deserves at least as much attention as the issue of academic selection. The government’s consultation has now closed; let’s hope the Department for Education reads responses carefully and reconsiders a plan which represents a huge step backwards in attempts to give all children a more equal start in life.

Kitty Stewart is Associate Professor of Social Policy at the LSE and Associate Director of the Centre for Analysis of Social Exclusion (CASE).

Ludovica Gambaro is Marie Skłodowska-Curie Fellow in the Education and Family Department at the German Institute for Economic Research (DIW Berlin).