To regain lost ground at the next election, Labour will need to convince voters that it can deliver greater social justice and security without risking the economy

To regain lost ground at the next election, Labour will need to convince voters that it can deliver greater social justice and security without risking the economy

Commentators have often noticed Keir Starmer’s apparent attempt to win back lost supporters by treating Brexit as if the issue is now finished with and by making appeals to patriotism. Nevertheless, the biggest move Labour needs to make is on the familiar territory of left-right politics: to convince lost supporters that it can deliver greater social justice and security without risking the economy, write Paul Webb and Tim Bale.

As many opinion polls have attested to over the past year, Keir Starmer has found it difficult to make his mark as Leader of the Opposition. Notwithstanding the twin economic impacts of Brexit and the pandemic, Labour continues to lag stubbornly behind the Conservatives in most polls, while Boris Johnson still holds an advantage over Starmer on the question of who would make the best prime minister. While the Conservatives do not seem to be much loved by the average British voter, Labour does not yet seem to be trusted to govern, especially when it comes to managing the economy.

This is not to suggest that Labour has made no headway at all under Starmer. In purely electoral terms, it has to be said that the change of leadership alone places Labour in a stronger place with voters, even if he has not yet won them over. Starmer’s willingness to tackle internal party issues such as the anti-semitism crisis and procedures for electing leaders might have stoked a critical backlash from the party’s left-wing, but it may have done him no harm overall with voters to be seen to be tackling the Corbynite left.

Political scientists often cast the strategic game of party competition in terms of the ideological positioning of parties. From this perspective, Labour’s challenge since the electoral nadir of 2019 has very broadly been to shift its position so that is generally regarded by voters as less left-wing and socially liberal. A perceived or actual shift to the right on matters of taxation, spending, and economic management is likely to be especially significant. As we have shown in our book The Modern British Party System, while Labour occupied similarly liberal territory to the Liberal Democrats, SNP, Plaid Cymru and Greens in 2019, it also shifted significantly further to the left than any other party (see Figure 1, compiled from data found here). 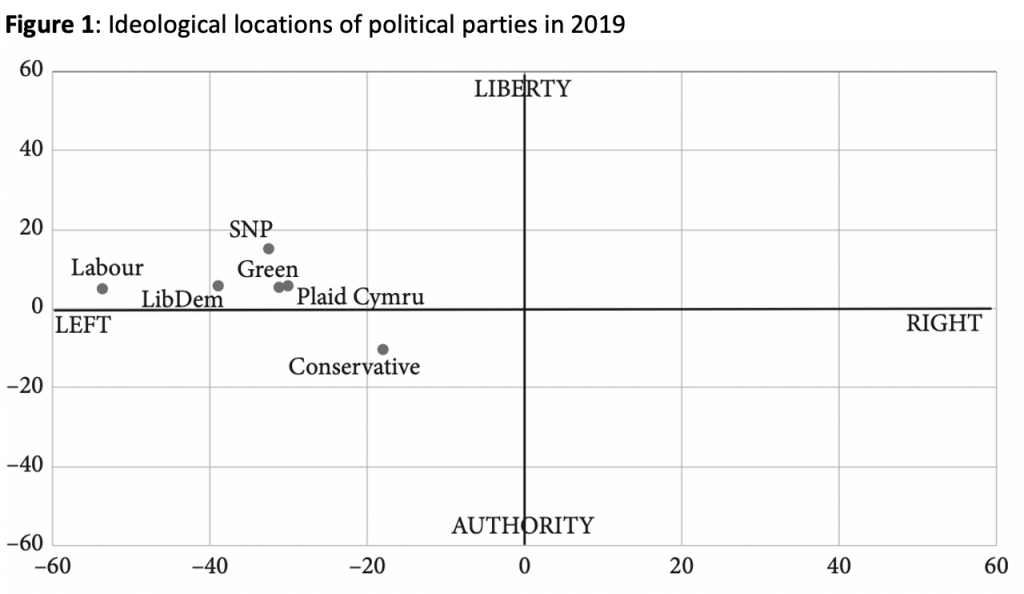 This is where Labour was most obviously out on a limb, with manifesto commitments to increase NHS spending by 4.3%, eliminate NHS outsourcing to the private sector, nationalise rail, mail, water and energy companies, raise the minimum wage, stop pension age increases, compensate Women Against State Pension Inequality, introduce a National Care Service (for England), increase education spending, abolish tuition fees, and build 100,000 new council homes per year. As we can see from Figure 2, this constitutes an even more left-wing Labour manifesto than the notorious ‘longest suicide note in history’ of 1983, which produced an almost equally disastrous electoral performance for the party. 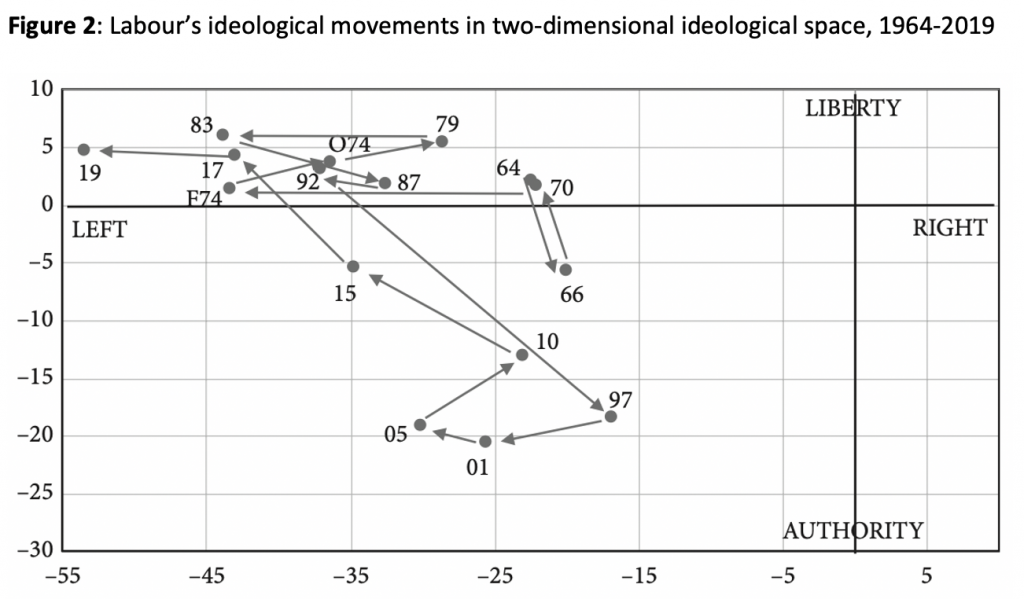 This is especially important since the ‘left-authoritarian’ quadrant located to the south-west of Figures 1 and 2 is the richest in terms of the electoral market: we estimate that some 60% of voters can be identified as locating somewhere in this sector of the market (nearly three times as many as in any other sector) – and only the Conservatives, with their well-resourced polling operation, seemed to grasp this in 2019. It is also obvious from Figure 2 that Labour was situated firmly in this quadrant when winning elections from 1997-2005.

The message for Labour is reinforced by evidence suggesting that those voters who deserted to the Liberal Democrats and Conservatives in 2019 (who constituted the party’s biggest net losses) were notably more right-wing on questions of political economy. So, while much has been made of the social liberal-authoritarian dimension of British politics in recent years – not unreasonably, given that it is closely connected with the issue of Brexit which has plainly generated a major electoral realignment – the left-right dimension probably remains key to Labour’s hopes.

True, under Keir Starmer Labour has sought to drape itself more obviously in the union flag and play the ‘patriotism’ card, but the Labour leader has also made it clear that he does not wish to the revive the debate about Brexit any more than absolutely necessary, and it is probably wise to avoid engaging the Tories on ‘Culture War’ issues.

From Labour’s perspective, then, the prospects for regaining lost ground at the next general election seem more likely to depend on battles fought on the familiar territory of left-right politics. This makes even greater sense given the potential for growing material insecurity in the wake of a decade which has brought austerity and pandemic lockdowns. The trick will be to convince voters that Labour can deliver greater social justice and security without risking the economy. This is a challenge which will inevitably be complicated by the strategic manoeuvres of their opponents, of course. Under Boris Johnson and Rishi Sunak, the rhetoric of ‘levelling-up’ and the hard economic facts of rising taxation, expenditure, and infrastructural spending imply a leftward movement by the Conservatives after 2019.

Seen in this light, policies recently announced by Shadow Chancellor Rachel Reeves committing any future Labour government to balance the current expenditure budget, while out-investing the Tories on infrastructural investment, signal an attempt to reassure voters and businesses about the party’s economic competence – a rightward shift, as it were. However, in order to carve out a distinctive appeal to voters, Labour cannot and should not allow a reassuring emphasis on greater managerial credibility to crowd out a rather more inspiring narrative about fairness. Harold Wilson and Tony Blair, as well as positioning their parties in the sweet-spot between liberty and authority, left and right, did exactly that – Wilson in the 1960s and Blair in the 1990s.  So far, anyway, Starmer has yet to prove he is in their league.

Photo by Nick Fewings on Unsplash.